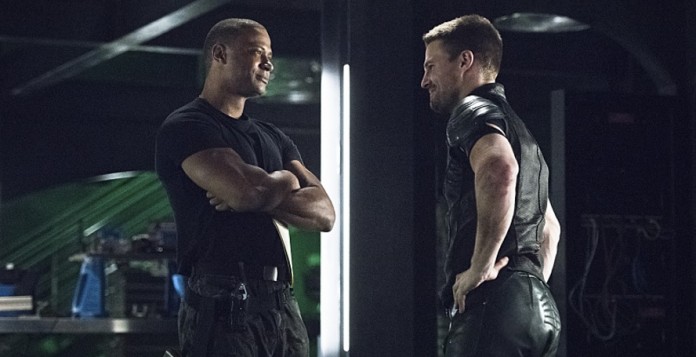 Check out Our Review [WITH SPOILERS] of Arrow Episode 7 Season 4: “Brotherhood.”

One of the problems Arrow experiences on a semi-regular basis is the need for inorganic drama. Sometimes, Team Arrow (and Team Flash for that matter), will have a villain to stop or a problem to solve, and instead of just allowing the always awesome and engaging characters to complete the adventure, the series feels the need, at times, to find easy to add internal strife to the team in order to add speed bumps to the mission.

At times, it works. For example, Thea’s bloodlust has become a strong wrinkle to the team dynamic, but at times, it all is just drama for drama’s sake. That’s what went down this week on Arrow Episode 7 as Team Arrow tried to find out the truth about Diggle’s brother Andy and his mysterious return to life.

First off, props go out to Arrow for naming Dig’s brother Andy Diggle. For those not in the know, Andy Diggle wrote Green Arrow: Year One for DC. Year One is arguably the single greatest modern era Oliver Queen story and was a comic that the TV series derived much of its inspiration from, so, well deserved praise to the writer. Now, last season, we found out through Deadshot that John Diggle’s brother was not dead. One of the driving forces behind Dig’s personal mission was to avenge his brother, to fight in his brother’s good name. Well, it turned out that not only was Andy not dead, he didn’t have a very good name either.

Andy Diggle was now a member of HIVE, a Ghost Soldier terrorizing Star City. Team Arrow wanted to help John rescue his brother, but John did not want to put his team in danger helping the man he felt betrayed by. This is all well and good, except Andy Diggle and HIVE were a threat to the city. Why wouldn’t Diggle go after his brother just to bring down a terrorist? The whole thing was wheelspin-y, obtuse, and frustrating as the team argued about nothing. Yes, John’s betrayal was palpable, but why on Earth was he pushing away his team away other than to just pad the episode?

When Diggle finally relented, Andy was taken down rather easily by Thea. Team Arrow seized a HIVE stronghold and a pretty kick ass fight ensured. Ray Palmer joined the fray and despite about a half hour of needless angst, the episode ended strong with an action piece that was almost at the level of that Daredevil hallway fight (almost).

Team Arrow won the day; they put a dent in Damien Darhk’s plans, Andy was captured, and everybody went home happy. Much more effective was Oliver’s bid for mayor this week as his new campaign manager encouraged him to accept the help of Damien Darhk in his campaign. Darhk’s offering proposed a slight conundrum: with Darhk’s help, Oliver would surely win and be in a position to help pull Starling City out of the muck it currently finds itself in. But of course, Oliver would not relent and snubbed Darhk, very publicly, so not only did Darhk experience a setback in terms of his Ghosts by losing Andy, he also told to go to ‘H-E-double-hockey-sticks’ by the leading mayoral candidate.

Darhk also got a bit humbled this week by Thea. When he confronted Speedy, Darhk tied to use his black magic to bring down the young hero. Not only did it not work, but merely touching Thea caused Darhk great pain. How’s that for intriguing? Speaking of Thea, Malcolm Merlyn stopped by, which is always welcome, and tried to convince Thea to satiate her bloodlust by killing a pedophile. Thea’s bloodlust came out during a date with Ollie’s young campaign manager as she was forced to throw a beating to some Quagmire ‘giggity’ scumbag. Thea is certainly on edge, and now that she is Darhk kryptonite, things are getting mighty interesting for the youngest member of Team Arrow.

We also discovered that the Ghosts were being controlled by HIVE through the use of mind controlling drugs. Now, this deepens the mystery of HIVE, but it also went a long way in proving that all of Diggle’s angst was profoundly forced into the narrative. There were the drugs, right in front of him. His brother’s evil clearly could have been manufactured, but he still acted like a petulant child not because of an organic part of his character, but because the script needed him to. Drama for dram’s sake.

Ray Palmer returned this week and it is always great to see Ray and Felicity on screen together. Ray is trying to find purpose in life after he has returned to the land of big people. He helped out Team Arrow and was his usual delightfully, charming self. I am very interested to see where the next chapter of Ray Palmer’s life leads.

I mentioned Deadshot before and this would have been a great episode to reintroduce Floyd Lawton as the killer for hire seemed to know a great deal about Andy Diggle. One has to hope that the series is not precluded from using Deadshot because of the character’s forthcoming film debut in Suicide Squad. Come to think of it, Arrow isn’t using Katana either anymore, another character that will be in Suicide Squad. Hmmm. Hopefully, there’s no internal character wrangling going on behind the scenes at Warners; that would just be petty.

Our last bit of business brings us to the Island flashbacks and that mysterious Russian (or whatever) woman Ollie rescued. Last week, Oliver was forced into killing her brother, and this week, the future Green Arrow had to tell the woman of her brother’s death. This was the first time any story meat was added to the bones of this mysterious woman. For the first time, I’m looking forward to seeing how this arc dovetails into the present.

All in all, a great deal of action and some good stuff for Thea and Ray, but I would love it if the drama would stay organic as there’s always enough story and excitement every week; drama should not have to be shoehorned into an already loaded narrative. 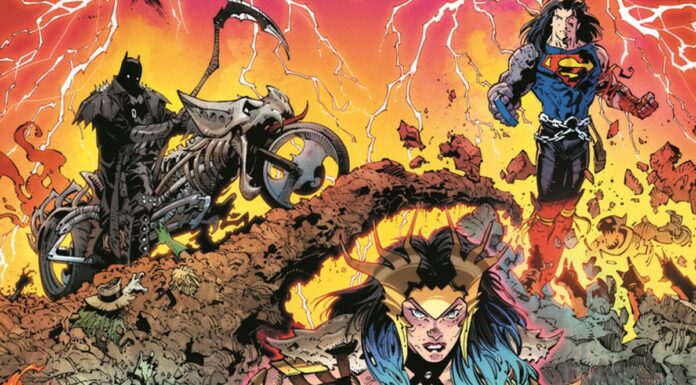 Natalie Portman Is Probably Done with the Marvel Universe

The Hidden History of the Hand in the Marvel Comic Universe