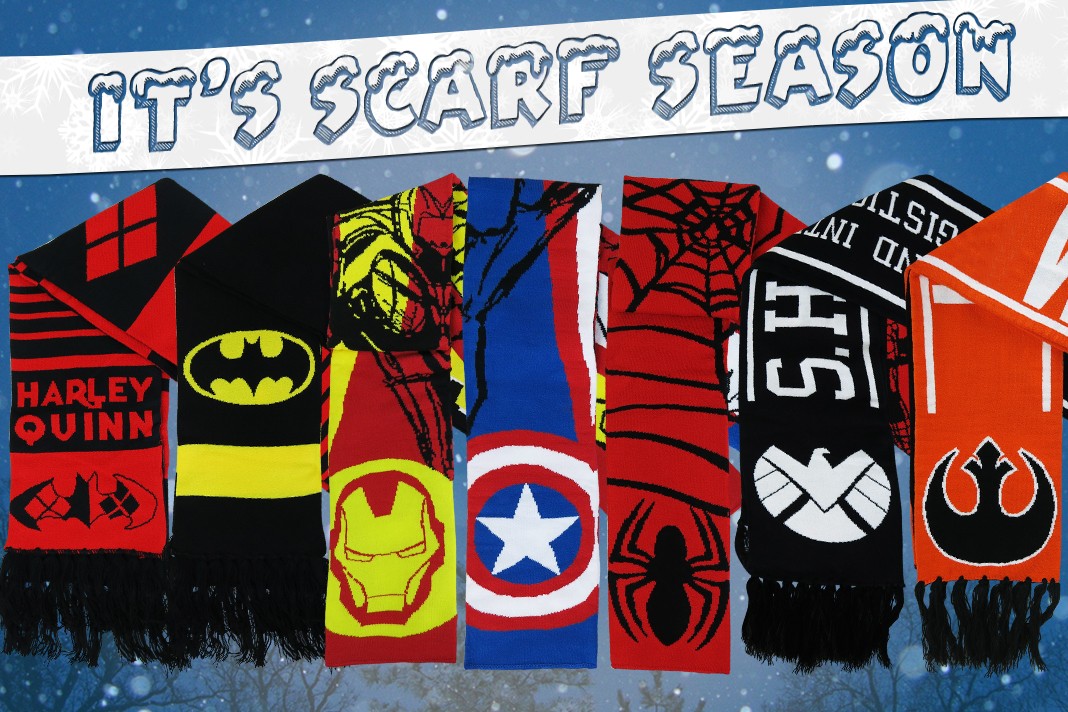 That’s right, we have scarves! And just in time, seeing how it’s the season for especially frosty necks! What kind of scarves do we have? Why, quite a few. Read on!

Starting from the left, we have the Harley Quinn Logo and Symbols Scarf. This soft, 100% acrylic, Harley Quinn-themed scarf features Harley’s trademark diamond design framed in thick blocks of woven black and surrounded with broad, black stripes. And let’s not forget the Batsymbol, also subjected to Harley’s signature pattern. I guess in Harley’s mind, this marks Batman as a similarly twisted individual. Maybe. Measuring 80″ long, this Harley scarf also features knotted, dangling tassels on each end. You wanted elegance, you got it.

The Batman Logo and Symbols Scarf is made from 100% acrylic, featuring two classic, beaming Bat-symbols hovering above wide, yellow stripes. The middle of the scarf features the Batman logo in massive, glowing, confidence building text. Confidence building? Look, Batman won’t need his Bat-Telescope to see the giant, yellow “BATMAN” swirling about in a twisting panic while you’re furiously pursued through dark Gotham alleyways by the likes of Killer Croc or Scarecrow. The second he catches a glimpse of a giant yellow “B,” he’ll put a finger up, check the wind, hurl his Batarang and get back to his egg salad sandwich. You’ll hear a thud, a howl, and a sudden lack of aggressive, pursuing footfalls. Yep, Batman just scored 50 points. Thanks, Batman Scarf (also with knotted, dangling tassels)!

The Iron Man Scarf is made from a breathable, Nano-tech weave powered by clean, arc-reactor-generated energy able to emit a deeply penetrating, soothing heat by way of measured pulses that….Okay, none of that is true. Sounds cool, but really not factual at all. The facts? This soft, Iron Man scarf is made from 100% acrylic and features an encircled, minimalist Iron Man cranium in contrasting, (and probably) trademarked red and yellow. This Iron Man scarf also features an image of Iron Man rendered as if roughly sketched in hard-pressed charcoal. Could this be a reproduction of an original Iron Man schematic? Hmmm. Commence reverse engineering in 3…2…1.

The Spiderman Swing Scarf is made from 100% acrylic, not that gooey, icky web-stuff spraying out of wrists (if you’re a fan of the organic web dispensing) or mechanically engineered launchers projecting strands of extremely adhesive materials with a surprising degree of tensile strength! Nope. Anyway, this comforting Spiderman scarf features a solid black Spider-symbol beneath the black bands of an intricate web resting in the scarf’s center. There’s also an image of everyone’s favorite menace swinging about and…upsetting people. Helping them, but scaring them a little.

The Star Wars/Empire Reversible Scarf is fashioned from 100% intergalactic struggle…and acrylic. It also resonates, simultaneously, with the Light and Dark Sides of The Force…not really. Okay, it’s made from 100% acrylic featuring one side adorned in the colors, symbols and text of the Rebel Alliance, and the other adorned with the terrifying text and fear-inducing symbology of the free trade-hating Empire! Oh, and it features fancy, knotted tassels!

The SHIELD/Hydra Reversible Scarf, made from 100% acrylic, is the perfect scarf for the double agent! Or, for the especially indecisive super-agent caught in the perpetual tug of war between two extremely well-funded organizations struggling to either shape society into something brutally authoritative or protect its tenuous civility. Which is which? You’ve been a double agent for so long, you really can’t tell the difference anymore, can you!?? It’s time to get out; it’s definitely time to contact your handler and join the rest of us ‘civvies.’ Oh, and each side of the scarf is layered with the identifiable symbology and obvious indicia of each government-toppling agency. OH! Don’t forget the tassels!

Want more scarves? Then click HERE to check out the rest of our scarf selection.!