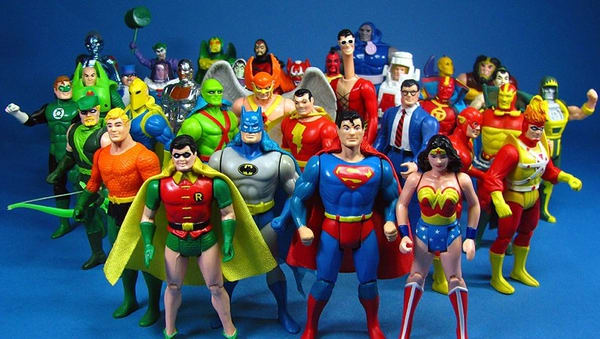 The 80s were arguably the golden age for toylines. That decade alone gave us Masters of the Universe, Transformers, GI Joe and Thundercats. However, the one line that stands out from the rest only entertained me for hours as a kid, but was my gateway to comic books! I am talking about the Super Powers line featuring the heroes from DC Comics!

Now, I wasn’t alive when the Super Powers toyline launched in 1984, but my older brother had a whole mess of them. To be exact, he had the following figures: Superman, Batman, Robin, Wonder Woman, Aquaman, the Flash, Green Arrow, Green Lantern, Hawkman, Firestorm, Darkseid, Lex Luthor and the Joker.

By the time I was two or three, I was as well versed in the DC universe as a little kid could be. I knew my ABCs, 123s, and the members of the Justice League of America.

These toys brought me hours of enjoyment and entertainment — I had the most thrilling adventures a three-year-old’s imagination could ever conceive of. Ever see Superman fight a giant soccer ball? I did. Wonder what would happen if Batman and Robin were in a desert (aka, a sand box)? That happened in my backyard. I also know who would win in a fight between Wonder Woman and Robocop (who came with a firing cap feature to boot).

One of my favorites of the Super Powers line was the Superman figure. As demonstrated in the comic ad above, if you squeezed his legs, he made a punching motion. He always saved the day, no matter the situation. Looking back now, the figure design is still classic.

Now, I don’t know how many of you had just Batman or Robin, but my brother and I were fortunate enough to have both. Those two resided in what I imagined was the Bat Cave: the fireplace in the living room. Batman had punching action while Robin karate chopped villains left and right. They saved plenty of Fisher Price Little People, let me tell you.

Aquaman, well, he had his own adventures — mainly in the bath tub. The Flash, Firestorm or He-Man were usually stranded in a bubble bath sea, and the king of Atlantis would save the toys in distress. Plus, he came with an awesome trident.

Now, you can have endless possibilities with hero figures, but you gotta’ have some villains in the mix. That’s where Lex Luthor or the Joker came into play.

I have to hand it to Kenner (now Hasbro) for the figure designs of Lex and the Joker. They look exactly like they came out of the comics at the time, as do the rest of the figures in the line.

Even though the line was done by 1986, DC heroes experienced a rebirth in 1989 when Toybiz launched the DC Comics Superheroes line capitalizing on their successful toyline based on the movie Batman. I remember this line specifically because one day when I was sick, my dad came home with a Robin figure to cheer me up! The reason I remember this specifically is because I remember the gold coloring on the card.

No more mooching off my brother! I was free to have this Robin fight everyone on Sesame Street if I wanted. Of course, they’d all become friends because of a misunderstanding. You’d be on guard too if a green monster suddenly popped out of a trash can.

I was also given the Riddler from this same line. Not sure how much you could do with a Riddler action figure besides have him ask other figures questions. I mean, he can’t really punch anyone.

Looking back, not only was I playing with amazing figures, I was also shaping my interest in comics.

These figures gave me countless hours of entertainment. For that, I can’t thank Kenner or DC enough.

Did you have any of the figures? Have any special memories? Let me know in the comment section below!