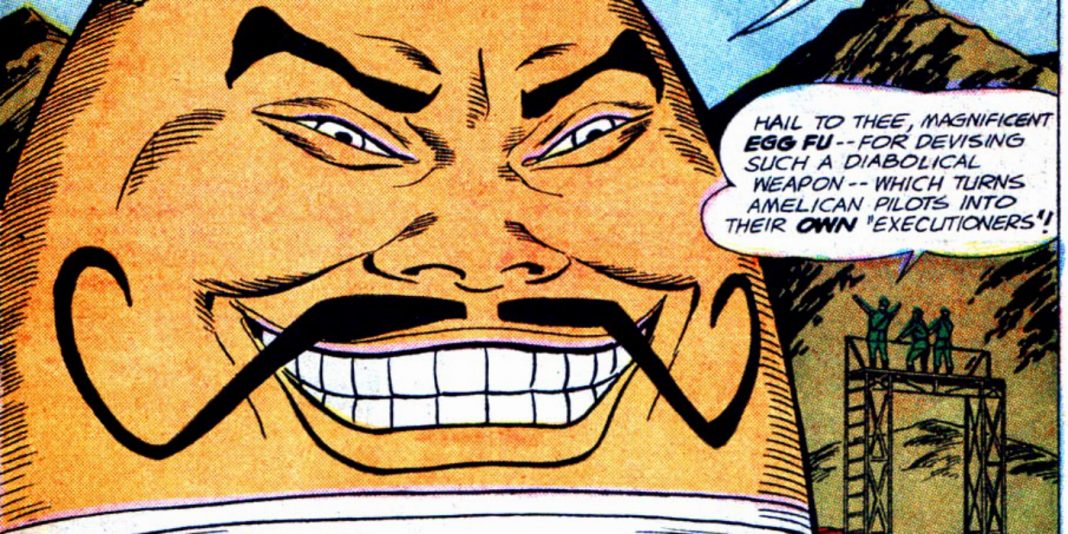 They say that a hero is only as awesome as his villain, but if your nemesis is a thirty-foot racist egg, does that mean your superhero career is officially doomed? We don’t want to judge a hero by his big baddies, but check out our list of five superheroes with the absolute worst rogues galleries, and let us know which rogues gallery is the most useless one to ever grace our hallowed comic book pages.

Flop or not, thanks to the Ben Affleck movie, more casual fans actually know who Kingpin and Bullseye are. And with additional thanks to the awesome Netflix series, it’s pretty obvious that The Man Without Fear has his fair share of villainous menaces to fight. But in actual comic book panels, Daredevil’s rogues gallery usually consists of random thugs that the Kingpin hires to ruffle up some feathers. Some villains are even former love interests gone cray-cray, and some have the worst names in comic book history, including Mr. Fear, Stilt-Man, and someone called Leap-Frog, who sports an exoskeleton frog suit that lets him, you know, leap. Oh, the villainy.

While RDJ is the epitome of cool in the Avengers movies, Iron Man, on his own, simply does not have a particularly memorable set of enemies to battle; there’s the extremely racist portrayal of villainy named The Mandarin, and sure, the movies brought the Iron Monger to life on the big screen. But other than that, there’s just…not much else. The main, recurring, and only nemesis that prominently features itself in almost all Iron Man stories is, basically, Iron Man himself. Tony Stark has always struggled with his inner demons, and not even Fin Fang Foom can match up to the villainy that Tony’s own personality brings. Oh, and there’s the alcoholism, too.

It’s incredibly annoying that the CW’s Arrow just keeps borrowing villains from other DC characters so they can give Stephen Amell bad guys to fight, but I guess I can understand—Green Arrow doesn’t really have enough interesting characters in his rogues gallery to span a whole series. There’s his super-cool archenemy Merlyn, and then…well, there’s Merlyn. Deathstroke and Ollie have personal vendettas against each other, but Slade is still a loan, and everyone else who’s faced up against the Emerald Archer is just too one-note. Is there any wonder why Arrow keeps trying to make Green Arrow the Dark Knight of that absurd universe? There will always be that awkward moment when he realizes he is not Batman, like when he lost to Ra’s al Ghul in that Season 3 snowy mountaintop duel.

Sorry, A.C. I mean, the poor King of the Seas is already taking enough heat as it is, so we oughta’ cut him some slack, right? Unfortunately, his rogues gallery is just as awful as his comic book career, with Black Manta being his most popular enemy thanks to the animated films and series. But then there’s The Fisherman, who uses a fishing rod to “lure” his enemies in, and I’m not even kidding (although I desperately wish I were).

As if that weren’t soul-crushingly traumatizing enough, there’s the Human Flying Fish, who willingly underwent a procedure to become, well, a human flying fish. He uses his unbelievable transformation to steal underwater treasures and stuff and becomes a minor inconvenience to Aquaman every now and then. Honestly, James Wan’s movie is Aquaman’s only hope.

There’s a grave injustice here, really, because how can a member of DC’s Trinity have the worst rogues gallery ever? One-off villains like The Crimson Centipede, Mouse Man, and even Walt Disney (or cartoon mastermind Uncle Wade Dazzle) are proof that there’s nobody else aside from Cheetah, Giganta, and Circe who can stand up to the Amazonian Princess. Ares has been prominent in the comics lately as one of Wondy’s big baddies, but does anyone remember Egg Fu (who simply hates “Amelicans”)? Google him. Seriously. Just…Google him.

We’re hoping the upcoming Wonder Woman film will finally do Diana justice (the latest trailer is just mind-blowing!), but who else has an unfortunate set of enemies in their rogues gallery? Did we get all your favorites (or not-so-favorites)? Sound off in the comments section below!