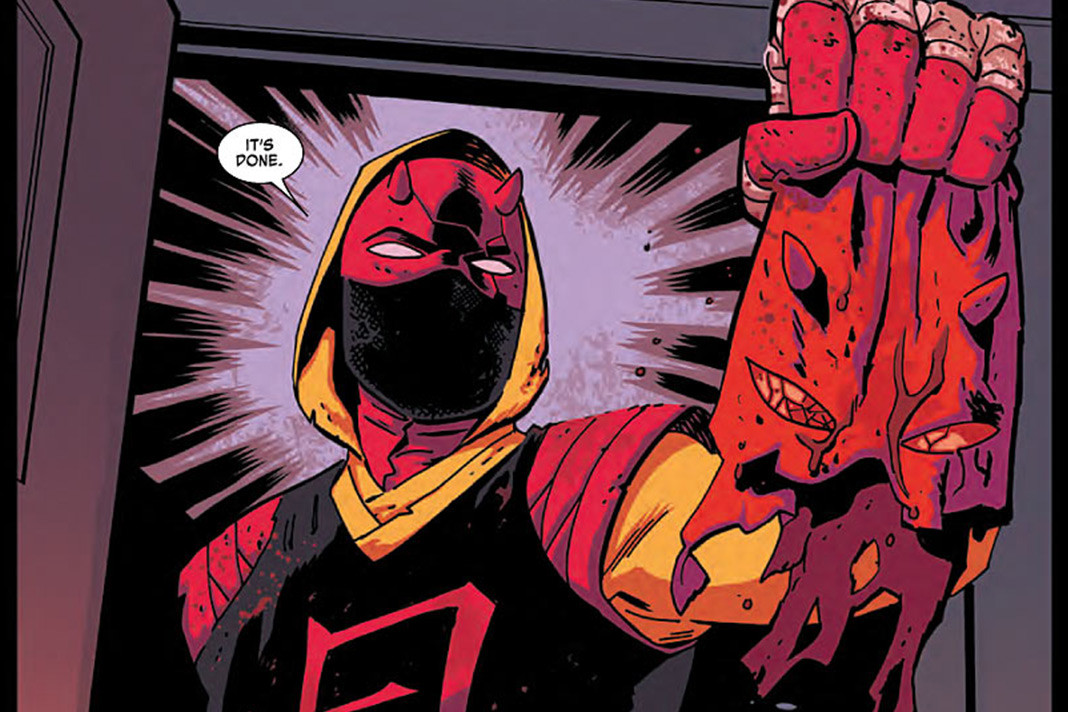 This is less of a review for Daredevil #18 as much as it is a eulogy for the amazing 54-issue run by Mark Waid.

For the second time in just over a year we bid adieu to Mark Waid & Chris Samnee’s Daredevil. Volume 3, which lasted for 36 issues between 2011-2014, came to an epic conclusion last February as Matt Murdoch, Foggy Nelson, and Kirsten McDuffie took down the Sons of the Serpent in NYC.

The series did a great job of separating itself from past Daredevil runs. Matt has more times than not been written as a tragic figure, surrounded by death, destruction, and pretty much anything else the writers could throw at him.

Not to knock the amazing, unbeatable work of writers like Frank Miller and Brian Michael Bendis who really defined the character with their runs; Waid managed to put his own spin on the character and breathe some much needed happiness into Murdock’s world.

Don’t get me wrong, there has been a barrage of awfulness encircling Murdock’s life from issue #1… Foggy getting cancer, his father’s bones being stolen by Mole Man, and being hunted by every criminal organization in the world… but amidst all this is a jovial temperament.

Maybe that comes from the Samnee and the slew of other artist who’ve worked on the series. Giving it a pop of colorful and cheer that is absent in Maleev’s darker, grittier illustrations from his early 2000’s run.

The run fits tonally and visually with other Marvel NOW! titles like Silver Surfer, Hawkeye, and Superior Foes of Spider-Man. All of these books managed to be fun and entertaining while still giving us those life or death adventures that make comic books oh-so-good.

Volume 4 (which really should have still been Volume 3 continued) picks up with Matt, Foggy, and Kirsten moving to the west coast to open their law firm. Well, not Foggy, because he “died.”

At the end of Volume 3, in order to take down the Sons of the Serpent, Matt is forced to reveal his secret identity to the public, further endangering the already cancerous Nelson. How do you protect a dying man? You fake his death!

Now since Murdock can no longer practice law in NY as a result his vigilantism, he uproots to the only other place he is licensed to arbitrate: San Francisco! Things couldn’t be going better for Matt. He’s got a great relationship with Kirsten, Foggy is on the mend, the authorities and public are supporting him, and he’s got a multi-million dollar book deal.

He even ditches the classic costume and begins gallivanting around in a blood red 3-piece suit in issue #14… because why hide your face if the world knows who you are?

All this good could only last for so long. Because, you know, it’s Matt Murdock…

In a desperate attempt to save the lives of his friends, Daredevil goes to Kingpin and offers to give him control of his life. The tension of such a serious and desperate scene is cut for readers by the revelation that Wilson Fisk’s office is covered in artwork featuring mutilated versions of Daredevil… all of which is unbeknownst to the blind Matt Murdock. That is something this series managed to do so well; they gave us the action and the drama, but they never forgot the comedy, albeit dark and disturbing sometimes.

Things have come to a boiling point; the Kingpin’s goons have guns to the heads of everyone Daredevil holds dear. His one hope for saving them, Ikari, has been taken out by his ally-turned-enemy The Shroud. What is the Man without Fear to do?

In a heartfelt exit from a series where Murdock has been forced to grow comfortable with that fact that he doesn’t always have to lose, whether it be the battle, the case, or someone close to him. He is put in the situation that is rigged for him to come out on bottom.

How does he control this Kobayashi Maru of a situation? I’m not going to tell you! This is a review! All I’ll say is, this is a fitting end to the series.

I went in expecting just about anything could happen. After all, no one’s life is safe at Marvel right now with Secret Wars destroying the universe and the All-New All-Different Marvel making it apparent that we won’t have the same 616-characters going forward.

I was happy to find that the creative team didn’t use the end of the universe as an excuse to do anything they wanted with these characters. The series ends with a focus on the three people we’ve grown to love (even more) over the past 55 issues and how living so close to Daredevil can have its rewards and its punishments.

Does Daredevil live to fight another day? Do his friends make it out alive? Does the Kingpin’s art gallery finally come to full realization? Does Ikari have a cooler costume then Daredevil? Is Foggy Nelson actually a government secret agent? Find out when you pick up Daredevil issue #18 at your local comic shop!

Daredevil is at the height of popularity right now.  The smash-hit Netflix series starring Charlie Cox has done wonders for creating new fans and driving fans to check out some of his most popular comic runs. The sky is the limit for our favorite blind vigilante lawyer. Fingers crossed Marvel keeps up the great work.

The next time we see Matt Murdoch/Daredevil he will be in the hands of writer Charles Soule (Superman/Wonder Woman) and artist Ron Garney (Uncanny X-Force). Look out for that in late 2015 under the All-New All-Different Marvel banner!

How did you like Daredevil #18? Let us know in the comments section below!

Interested in a Daredevil t-shirt, hoodie, hat, or other sweet accessories? Check out the huge selection over at SuperHeroStuff.com.