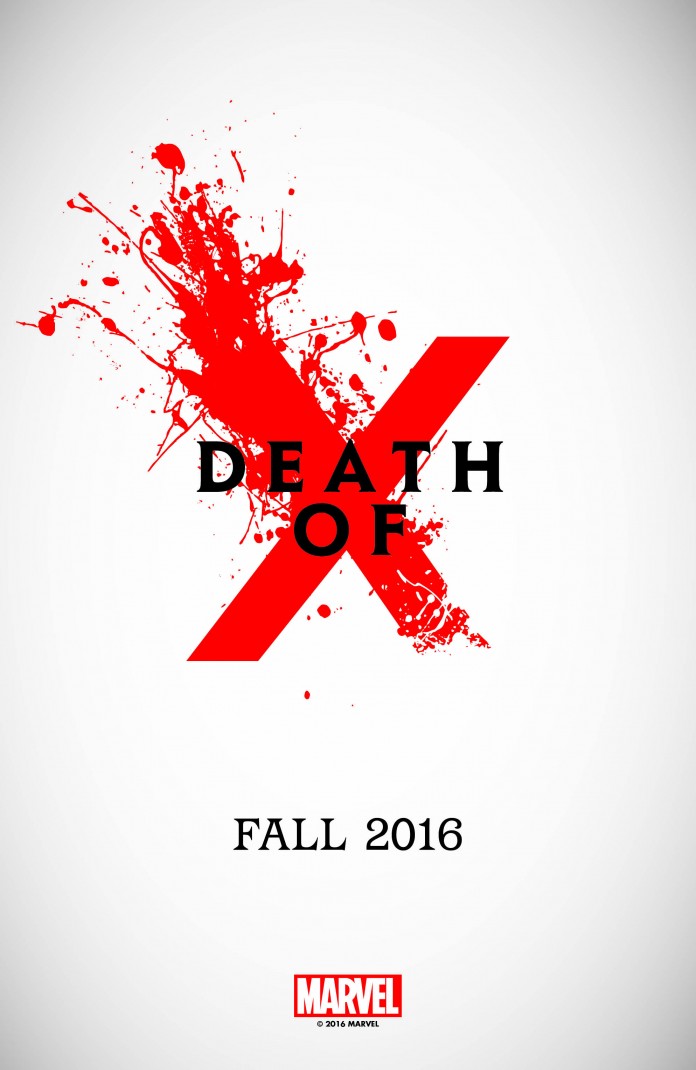 Maybe. I mean, look at it! It says, “Death of…” over a (presumably) blood-drenched letter “X.” Honestly, folks; that’s the only bit of information that arrived in today’s Marvel Press Release. The image wasn’t accompanied by the usual plot summary, or interior art, or countless variant covers and several interior pages. Nope. The only thing that survived the shuttle-ride from Marvel’s promotional HQ to my humbly receptive email inbox was this jarring, highly portentous image. So, enough about its means of transference. Let’s ask the important questions now, shall we? Here’s one to get us started: does this marvel press release tease a major death? Hmmm. Potentially.

Who or what is going to die? Well, it’s an “X,” so I’m thinking an X-Man will meet the shrouded, cosmic sieve-figure who collects our inevitable, entropic finality and delivers our spirit onto the next phase of…uh…’inter-being.’ Or something. But, I’m not convinced it’s an individual. No, sir. In fact, I’m proposing that all holders of the coveted X-Gene will meet their end at the hands of…whatever! What? Yes, I ‘m telling you that Marvel is going to rid its Universe of all X-Persons, X-Kittens, X-Fish Sticks and X-Dilettantes in an act of paper-based genocide! Why would Marvel kill off the X-Men and all related X-Personnel?  Because they’re sick of sharing ’em with FOX!

Okay, killing ALL the X-Men might be a stretch. I mean, would Marvel REALLY want to sever ties from such a dependable cash cow? Probably not, BUT….look at what they’re doing with the Inhumans. They’re basically playing the part of Mutants in the Marvel TV/Cinematic Universe, and granted a more illustrious presence in the pages of current Marvel Comics. Hmmmmmm. I think this is what a coup d’état looks like right before it’s a coup d’état.

What do you think? Are the ‘Children of the Atom’ finally reaching their much prophesied twilight, now relegated to evolutionary chaff in the wake of…INHUMANITY????