Home COMICS Miss America Is Getting Her Own Comic Series

No, not that Miss America.

At this year’s New York Comic Con, Marvel Comics announced a new solo series: America. Set to appear in 2017, America will center around Miss America Chavez. Joining the Young Avengers in 2013, Miss America is breaking ground as a Latina who is part of the LGBTQ community (PROGRESS!).

The first Miss America comic appeared in 1944 as a result to pull in an audience as superheroes began to fade out of fashion (pretty unbelievable by today’s standards).

Chavez is the 2nd Miss America (the first being Madeline Joyce), first appearing in 2011 in a limited series called Vengeance. Not only is Miss America from another dimension, but she was also raised by two mothers. Her abilities includ superhuman strength, flight, speed, and the ability to kick holes in reality. All these attributes have made her popular among fans and are the reason why Miss America is getting her own comic series.

In the past and even today, Marvel and comics in general have been criticized for not focusing on diverse characters. Having someone like Miss America is a huge win for fans who want to see more of themselves in their comics. Not only is she of Hispanic origin, she’s a lesbian, and a young woman who is breaking barriers (as well as faces). 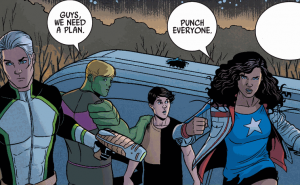 Though a creative team has not been announced, it’s been confirmed that former Young Avengers artist Jame McKelvie will be providing the covers for the series. Definitely keep your eye out for this one – she’s going to punch star-shaped holes in the glass ceiling.