Home COMICS Nightwing #1 Review: How to Properly Maneuver the Parliament of Owls 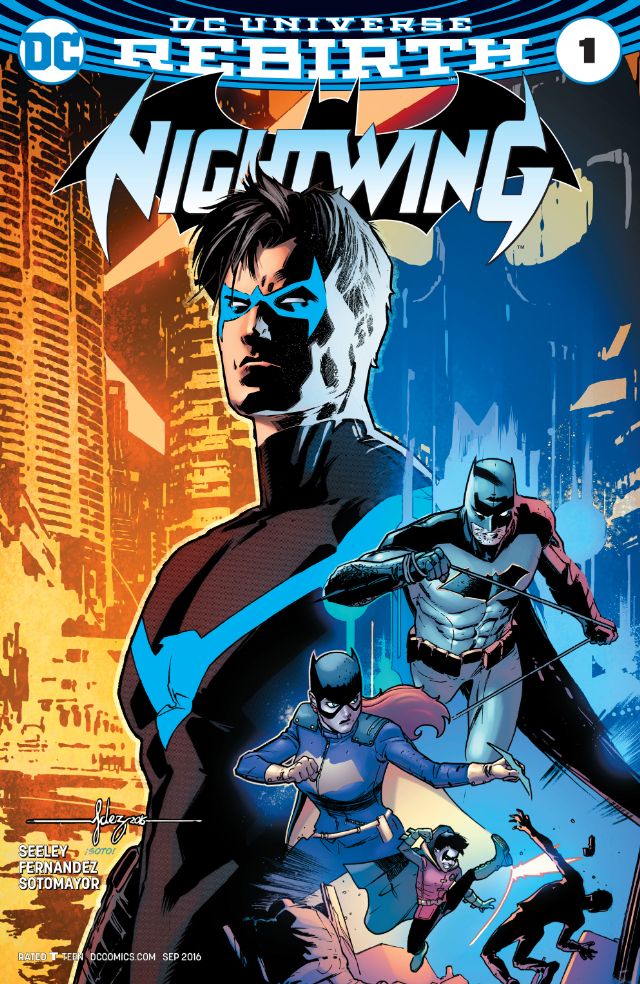 Check out Our Review [WITH SPOILERS] of Nightwing #1!

The traditional Bat Family characters have not been a large part of Dick Grayson’s solo adventures these past few years. In the pages of Grayson, writer Tim Seeley, along with current Batman scribe Tom King, traded in the Bat for some Bond by making Dick Grayson’s DC premiere superspy.

It all worked as Grayson became one of DC’s most engaging titles. But now Seeley is the one who is solo and Dick Grayson is once again running with a pack as Nightwing kicks off his Rebirth-era adventures. To celebrate, Seeley brings in as many Bat-allies as he can, finding scenes for Batman, Damien Wayne, and Batgirl. It’s a very welcome reunion as all these characters have been away from Grayson’s solo book for so long. You can tell that Seeley is relishing using these characters as these quiet moments of Grayson reuniting with his Bat-pals are some of the best moments in Nightwing #1.

That’s not to say there is a dearth of action. The new direction for Nightwing focuses on the titular hero agreeing to join the Parliament of Owls in order to save Damien Wayne’s life. The Owls told Dick they would kill Damien if Nightwing didn’t agree to become their secret weapon. Of course, Dick is playing the Owls from the inside. This issue, Dick meets his new partner, a rough and tumble badass Owl agent named Raptor. Generic name aside, this guy reeks of danger and I look forward to learning more about this latest adversary. Truthfully, Raptor’s intro kind of reminded me of when I first meet Deathstroke so many years ago. That’s some high praise right there.

But sadly, all this neat stuff is built on a flimsy foundation as I can’t wrap my head around the fact that the Owls trust Dick when he is clearly playing them. I appreciate the fact that there is a thread connecting back to Grayson as he is playing the undercover game, but the Owls’ gullibility seems a bit contrived.

Yet, with all the Bat-characters coming back into Dick’s world and the dark beauty of Javier Fernandez’s art, I’m willing to stick around to see if Seeley has some cards to turn over regarding the Owls, because while the plot may have some cracks in it, seeing Dick Grayson do his thing as Nightwing again is worth the $2.99.