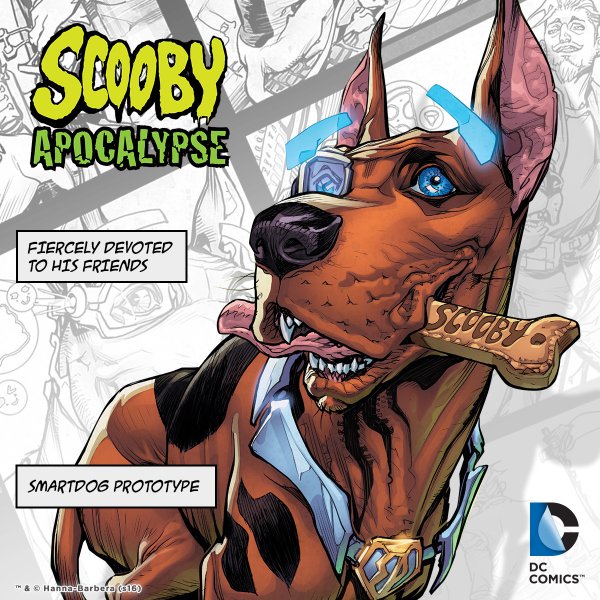 Jinkies! Check out Our Review [WITH SPOILERS] of Scooby Apocalypse #1.

Like, zoinks! Scooby and the gang are back in this new DC title, but this time the end of the world is coming! Pack yourselves some Scooby Snacks as we take a look at the strange new world of Scooby Apocalypse #1.

Dr. Velma Dinkley has discovered a conspiracy that could end the world as we know it! Deciding to expose the truth she calls in journalists Daphne Blake and Fred Jones, while also accidentally involving her co-worker, Shaggy Rogers, and one of her lab’s test subjects, a talking dog named Scooby-Doo. But just when it seemed like there was no hope, something unexpected happened outside. Could there be more to this sinister plot than Velma is letting on?

I have to say, when this was first announced not too long ago I didn’t know how to react. It received a lot of backlash and many called it silly and a bit unnecessary, and I’d be lying if I said I disagreed. So going into it, I didn’t really have big expectations, but when I actually read the book, it surprised me (just not the way I thought it would).

Starting with what’s good, the artwork by Howard Porter was very good at giving the Scooby Gang a realistic look while breathing life into the settings (the festival was a particularly nice set piece). Keith Giffen also did well with building up the end of the world, giving you just enough to understand what’s coming, but leaving you room to wonder what’s going to happen. I’d also like to and Scooby’s first meeting; it fleshes out Shaggy’s character, but it really could’ve been a complete story all by itself.

Surprisingly, I found the best written character was Fred. He came off as the more relatable character and he even had a few funny lines every now and again. Watching him follow around the girl he likes, who clearly doesn’t like him, really makes you feel bad for the guy and you want to see him get through this.

Now for the parts that weren’t so good in the comic. Unfortunately, if Fred was the best character in this issue, then sadly Daphne was on the opposite end of the spectrum. Her personality was pretty unlikable with a “has-been who blames everyone else for her problems” feel to it. While there were times where she and Fred played off each other well, it didn’t help that she pretty much spent her time whining and being self-absorbed throughout the comic. I just hope this will change going forward, because that kind of character can become very annoying very fast.

Next there’s Velma, who is only there to move the plot along. Other than that, and giving the reader exposition, it doesn’t feel like Velma has any real personality beyond her obvious intelligence. With the apocalypse now underway, there’s a chance her character could evolve; if that’s the case, I’d really like to see how it plays out.

Also, the ending of the main story was a bit confusing to me, given what we learned this issue. How would a virus that’s supposed to control human personality traits suddenly mutate people into monsters? No idea, but hopefully they’ll explain with issue #2.

Even though I do like the art for this comic it’s probably worth mentioning the new redesigns for these characters. I didn’t mind most of them, but Shaggy and Scooby’s are a little weird to me. With Scooby it would’ve been fine, but I had a hard time really understanding what that weird headset he was wearing most of the time did (or even why he needed it). And while I wasn’t offended by Shaggy’s new look, there were times where I said to myself, “Boy, it sure is weird Scooby-Doo and Green Arrow are hanging out.” Yes, some of the changes were, in my opinion, chosen poorly and completely unnecessary.

After I finished the comic I felt something was missing in the story, but I couldn’t put my finger on it until I re-read it. When I picked up Scooby Apocalypse #1, I thought I was getting that classic Scooby craziness the title implied, but it was surprisingly tame. Half the time I was reading this, I forgot I was reading a Scooby-Doo book; it felt like your standard sci-fi apocalypse story, and for something like this, I don’t think that’s a good thing. With something called “Scooby Apocalypse” I think you need it to be weird and crazy, otherwise, what makes this story different from all the other apocalypse stories out there? This comic felt like it was playing it too safe, leaving us with Scooby-Doo characters that didn’t feel like Scooby-Doo characters (you could even make the argument that they could’ve been swapped out with different people altogether and it wouldn’t change the story that much). With the next issue, I really hope we see something that makes this series stand out, because without something unique, I don’t think readers are going to stay interested in this comic for very long.

So in short, Scooby Apocalypse #1 is not great but also not terrible. There were some good things in this issue but there were just too many negatives occurring simultaneously. Unfortunately, this comic was kind of unremarkable and therefore hard for me to recommend it, but if you’re really curious I wouldn’t stop you either. Just don’t go into it expecting the Scooby-Doo you’re used to. Will this new Scooby-Doo be a “Scooby Don’t”?  Well, maybe we’ll see next issue.