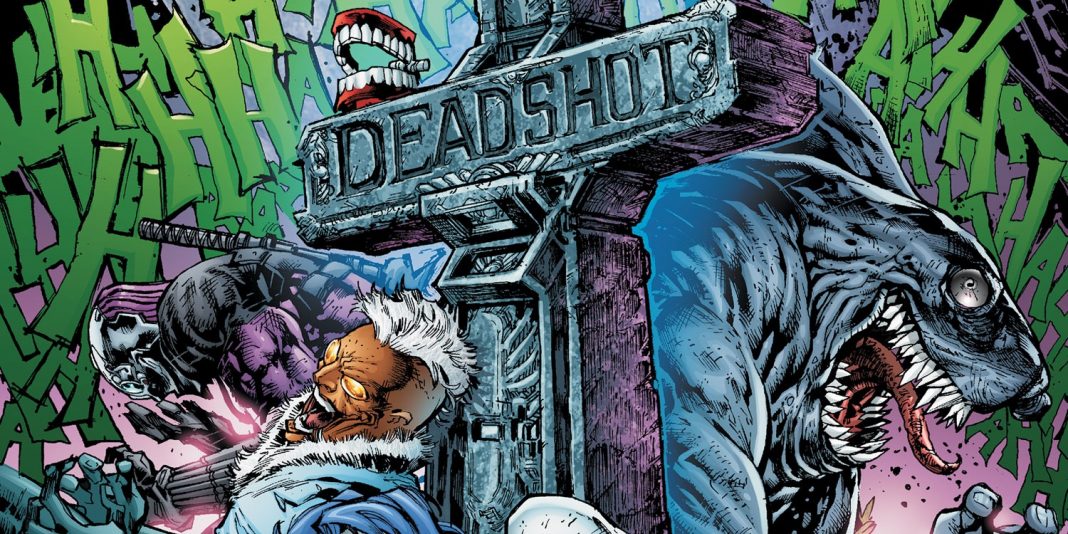 The world is getting to know the names of the members of DC’s film version of the Suicide Squad. Harley Quinn, Deadshot, Captain Boomerang, Rick Flag, Killer Croc, El Diablo, and the rest are just pieces of the long history of the Suicide Squad. But in the pages of DC Comics, there have been many more Suicide Squad members that were forced into service by Amanda Waller – and not all of them made it out alive. To celebrate the impending film release of Suicide Squad, we present a list of those that fell in battle as members in Task Force X. This is a roll call of the ten greatest deaths in Suicide Squad history.

Blockbuster wasn’t the most famous Batman villain, but he wasn’t small potatoes either. This muscle-bound menace was the closest thing Batman had to the Hulk in his rogues gallery as Blockbuster was an out of control, murderous rage machine. When Amanda Waller pulled together her first team of Suicide Squad members, she felt that Blockbuster’s raw strength would benefit her Task Force X. It was a good call, but during the Squad’s first mission, Blockbuster met a villain that was way bigger and way badder. The hellbeast Brimstone stomped on Blockbuster making this Gotham City powerhouse the first villain to die as a member of the Suicide Squad. Like the movie rental chain of the same name, Blockbuster was eradicated, and no, he was not replaced by a villain called Red Box.

Karin Grace was a member of the original Suicide Squad, a group of daring adventurers that only took on the most dangerous missions. Grace fought for her country out of a sense of duty and along with Rick Flag, did not have a criminal history. When Amanda Waller put together her Task Force X, she handpicked Grace to serve as this new, villainous team’s medic. Her lover and comrade in arms Flag did not approve and Grace’s inclusion on the new Squad became a major point of contention between Waller and Flag. Things got worse when Grace was killed in action against the robotic Manhunters. Grace bravely sacrificed herself to take out a regiment of the murderous Manhunters as the Squad proved that even being a heroic member of the original Task Force X would not keep one safe. Things got worse between Flag and Waller from there.

Before Dr. Light became one of the creepiest DC villains in the pages of Identity Crisis, he was somewhat of a sniveling joke. In the pages of Suicide Squad, Light was recruited by Waller because of his stunning array of light-based weapons and vast scientific know-how. Too bad, since Light spent most of his time as a Squaddie pooping his pants and running away from any and all threats. But on a mission to Apokolips, Light found his gonads. He found the heart to help his team by attacking a regiment of Parademons. Here, Dr. Light found the guts- to die. None of his teammates shed a tear for the sniveling, mustachioed coward, but Light’s tale wasn’t done yet. Light became a ghost and haunted the Squad for quite a while before returning to life. Listen, he may have returned, but Light’s death totally counted as +1 on Waller’s kill card.

So writer Grant Morrison died as a member of the Suicide Squad. I should probably explain. During his run on Animal Man, famed Scottish writer Grant Morrison made himself a character in the DC Universe. Animal Man was searching for the killer of his family and this meta journey brought him face to face with the writer that decided to kill Animal Man’s wife and children- Grant Morrison. What followed was one of the trippiest encounters in comic history as creator and creation discussed the nature of loss and fiction. It was brilliant but it made Grant Morrison a functioning, legit character in the DC Universe. So Morrison’s fellow writer and godfather of all things Suicide Squad, John Ostrander, took it upon himself to do something about that.

Ostrander morphed Morrison into a super-villain known as the Writer. The Writer and his magical word processor, that had the power to make anything the Writer typed into reality, were recruited by Waller to go up against Circe and her magical minions. The Writer typed in clever ways to take down Circe’s horde until tragedy struck. The Writer was brought down not by a bomb, bullet, or knife- the Writer was killed by writer’s block. Hey, it happens to the best of us.

For a while, it seemed like the legendary Ray Palmer, aka the Atom, was recruited to join the Suicide Squad. This wasn’t that unusual as the Squad did have a few heroes in its ranks. Heroes such as Vixen, Nightshade, and Nemesis were recruited by Waller to keep the villains of the Squad in check. Fans might have bought Palmer as a member of the Squad, but many classic DC devotees were scared. Atom was one of DC’ most iconic heroes; would Ostrander dare to kill the Tiny Titan? Well, sort of. Ostrander did kill this Atom but it turns out that this diminutive hero wasn’t Palmer at all, but a man named Adam Cray. Cray was the son of a murdered senator and was conscripted by Palmer to take his place as the original Atom tracked down a team of shrinking mercenaries known as the Micro Squad. One of the Micro Squad killed Cray, ending Palmer’s ruse. Palmer avenged the death but Cray’s shocking demise remains one of the most brutal deaths in Squad history.

Sidearm was a Superboy (the clone version, not young Clark Kent) villain that was recruited to the short-lived, post-Waller version of the Suicide Squad led by federal agent Sam Makoa. Superboy was also manipulated into joining this team and was forced to team with a number of his rogues gallery. During the course of the mission, Sidearm here was eaten by King Shark. Listen, if a villain is eaten by a man shark that wears pants, that villain makes this list – period. Sidearm, as generic as he was, was the only villain in the DC Universe history that became wereshark poop.

Ah, our first New 52 entry into our list. The DC universe may have been rebooted, but the Squad members were still-a-dying. Case in point, we have sisters Lime and Light. These two Green Arrow villains were twins gifted with light (duh) based powers. After they were brought down by Oliver Queen, Lime and Light were conscripted into the New 52 version of the Suicide Squad. The sisters were sent by Waller to retrieve an escaped Harley Quinn. When Lime was arrested, she began to rat to police about Waller’s unit. The Wall detonated Lime’s explosive collar and boom, needless to say, Light was devastated and swore to destroy Waller. On a mission with the Squad, Deadshot used Light as a human shield, killing the vengeance-filled woman. Deadshot proclaimed if anyone was to kill Waller, it was going to be him. Ooo, badass. Lime and Light; we hardly knew them and their names kind of sound like an ad slogan for diet 7-Up.

In the first issue of Ostrander’s Suicide Squad, punk rock villain Mindboggler used her illusion casting power to frighten and humiliate Captain Boomerang. Boomer essentially peed his little boomerang suit after Mindboggler was done with him, but Boomerang neither forgave nor forgot. On the Squad’s first mission in its regular title, the Suicide Squad went up against a super-villain team known as Jihad. Mindboggler was killed in front of Captain Boomerang even though Boomer could have easily saved his teammate. You see, the always conniving Captain boomerang wanted Mindboggler to pay for the humiliation. Mindboggler’s death established Boomerang as an utter scumbag whose personal needs trumped that of his new team. It also told readers early on, that any villain could get cacked at any time, and that’s no illusion.

Slipknot was a Firestorm villain that had the ability to tie really effective nooses and knots. That’s it, really. Slipknot was also really gullible. As already mentioned, Amanda Waller had her Squad members fitted with explosive bracelets and collars that would detonate if any of her conscripted soldiers attempted to escape. Captain Boomerang told Slipknot that the bracelets were a bunch of bunk, so Slipknot attempted to flee during a mission. The bracelets were not a bunch of bunk and Slipknot’s arm detonated. Slipknot did not die from the explosion or the damage to his limb, but the dude’s only talent was to tie knots, so he’s kind of better off dead. Good luck tying knots with one arm. That’s KNOT going to work. See what I did there?