Home COMICS The Trump and M.O.D.O.K. Mashup You Never Knew You Wanted 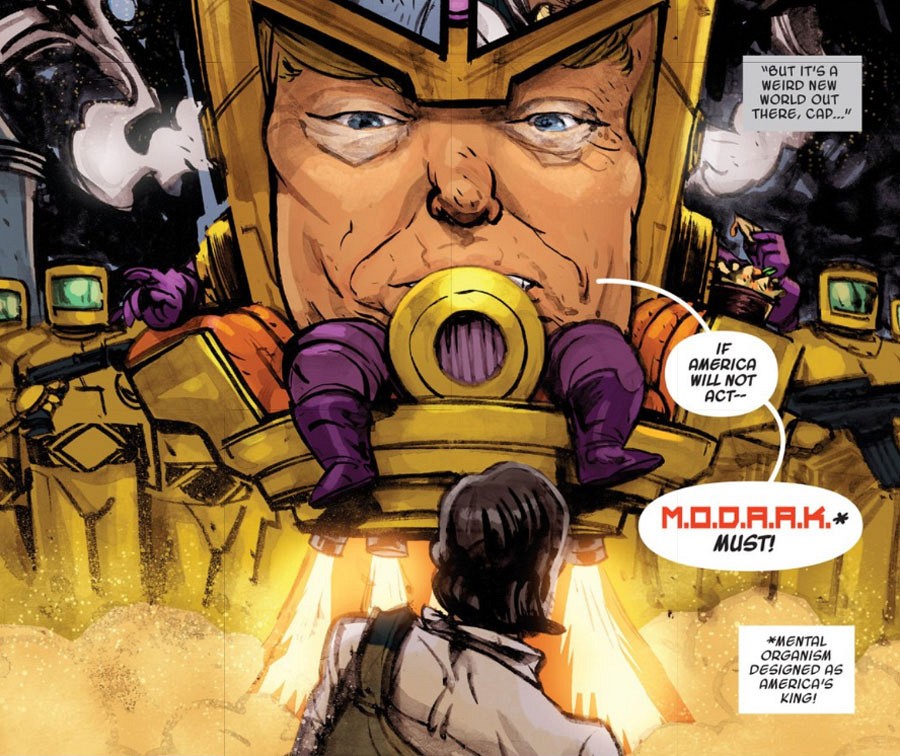 It appears Marvel has decided to, “Make M.O.D.O.K. Great Again” as a familiar foe gets reintroduced in a new story… complete with a rather political interpretation. Yep, it’s a Trump and M.O.D.O.K. mashup the likes of which you’ve never seen…or requested.

That’s right, it’s time to meet M.O.D.A.A.K, or “Mental Organism Designed as America’s King.” You’ll notice the amazing similarity between the new incarnation and the looming Republican Presidential Nominee, Donald Trump. Still, take another look and check out how close the two really are.

M.O.D.A.A.K. is unnaturally orange and rules effectively despite having tiny, VERY tiny hands (something the real Trump has been arguing about over the past few months). He hovers around his secret A.I.M. wall built on (of course) the American-Mexican border. We also get a look at some of his interests; notice the nice taco salad bowl right there on his chair. No stone was left unturned in this version of a Trump-like character.

His presence is part of a short story in The Spider-Gwen Annual #1, where Earth-65’s Captain America, Samantha Wilson, is called into action to stop the growing threat on the border. And stop him she does, even delivering a solid blow before the floating Trump head can spit out his catchphrase.

We also need to know what Earth-65 has in store for the other Presidential Candidates. Could Hillary Clinton be that world’s version of Ultron, secretly using the internet in ways the Government doesn’t approve of? What about Bernie Sanders? Considering his affection for birds, perhaps he can be a variation of The Falcon, or maybe…The Sparrow?

Trump surely isn’t going to be pleased by this. It’s only a matter of time before he goes to war with Marvel over his newest depiction. It’s certainly not going to help that Canadian Prime Minister Justin Trudeau is getting the hero treatment (not to mention being placed on the actual cover) when joining with Alpha Team on a future cover of Civil War II: Choosing Sides. Perhaps this will eventually lead to Captain Canada vs M.O.D.A.A.K. in a future Marvel showdown.