LeeAnna Vamp is a world-famous cosplayer with one heck of a cosplay resume. As a HUGE fan of TV, games, toys, fashion, horror, mutually agreed upon bloodletting and any and all things 80s-related, she’s made her indelible mark as an incomparable pop-culture fashionista!

LeeAnna, considering her incredibly busy, gloriously suffocating schedule, was gracious enough to grant us a little time and answer a few questions regarding her experiences, her preferences, her elaborate costume constructions, and whatever else I thought was relevant when regarding someone who proudly proclaims the following: “I am a fan and will be a Nerd Forever!”

So, if you’re brave enough to continue, let’s learn a little bit more about LeeAnna Vamp, the self-professed, but universally acknowledged, “Ghoul of Your Dreams!”

1. How long have you been cosplaying?

2. What was it that attracted you to cosplaying?

“The fact that you can be anyone you want to be. Not only can you express your love for a character but you can become that character. It’s Halloween all year round for me and you all know that Halloween is kinda my thing.”

3. When did you discover your love for horror movies?

“When I was a kid and I watched The Exorcist at a friend’s house. I was terrified and loved it so much!”

4. Do you have a favorite horror film or character? What would you do if you actually met this character? Scream and flee, or ask it/him/her for an autograph?

“I’d have to say Nightmare on Elm Street. I love Freddy Krueger and if I met him I would probably ask him out for dinner and we’d dine together using our Freddy claws.”

5. How much do you love Star Wars? Marginally, significantly, or obsessively?

6. Tell us a little bit about your program, Star Wars Girls, and why you decided to create it.

“Star Wars Girls is about the love of Star Wars talked about by girls 😉 It’s hosted by myself and fellow female Star Wars nerds. We talk about all things Star Wars, attend and cover events and basically just nerd out on Star Wars stuff. I started it because I love Star Wars and just wanted to share that love. It’s such an amazing world and community that I’m proud to be a part of and I wanted to be able to share that with all of my fans.”

7. And it seems you have another program, Best Friends Forever. I mean…puppets? YES!

“Best Friends Forever is my puppet show, it’s the Muppets meets Halloween. It’s creepy and cute and one of the things that is near and dear to my heart. I am a Halloween kid and Best Fiends Forever allows me to share that love with kids of all ages. We sing, we dance, and we educate. It’s so much fun to create, produce and act in and we will be releasing a lot of new episodes this fall!”

How many conventions do you attend per year?

“A lot. 😉 Last year it was 40-ish and this year I think it’s 30. There are so many conventions all over the world and I am beyond blessed to be able to travel the world and meet my fellow nerds all around the globe.”

9. Do you make your own costumes?

10. How long, on average, does it take to create one of your elaborate costumes?

“It all really depends on the costume. Some can take weeks and others can be done in a few days. When I travel a lot I typically do costumes I can get done in between trips.”

11. What kinds of materials do you use when creating your costumes?

“Most of my costumes incorporate multiple materials, anything from fabric to ABS plastic.”

12. What’s the average cost to create one of your costumes?

13. What was the most difficult costume to make? What did it involve and how long did it take?

“Probably my Ciri costume from The Witcher for multiple reasons. First, I was on a bit of a time crunch, trying to complete it in between traveling, and second because I was learning and trying new techniques as I was making it. This took about a month but spread out over time.”

14. Which Cosplay are you the most proud of?

“Definitely my Fem Trooper. I’ve wanted to be a Stormtrooper ever since I first watched Star Wars as a kid and when I finally completed the costume and put it on I felt like a badass! Sometimes I just put it on because it’s just so cool looking!”

18. What characters/cosplay do we have to look forward to in the future?

19. Who’s your favorite Superhero and why.

20. Your favorite Thundercat and why.

“The crazy cat lady in me wants to say all of them but if I had to pick I’d say Cheetara. She’s brave, powerful, and has a 6th sense so she’s a creepy cat lady, kinda like me!”

21. Would you rather hang with Skeletor in Snake Mountain, or He-Man at Castle Grayskull?

“Skeletor all the way!”

More LeeAnna Vamp? I can help you with that.

And you can catch her at our Superherostuff.com booth at this year’s New York Comic-Con! 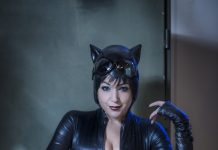 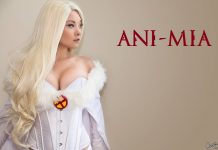