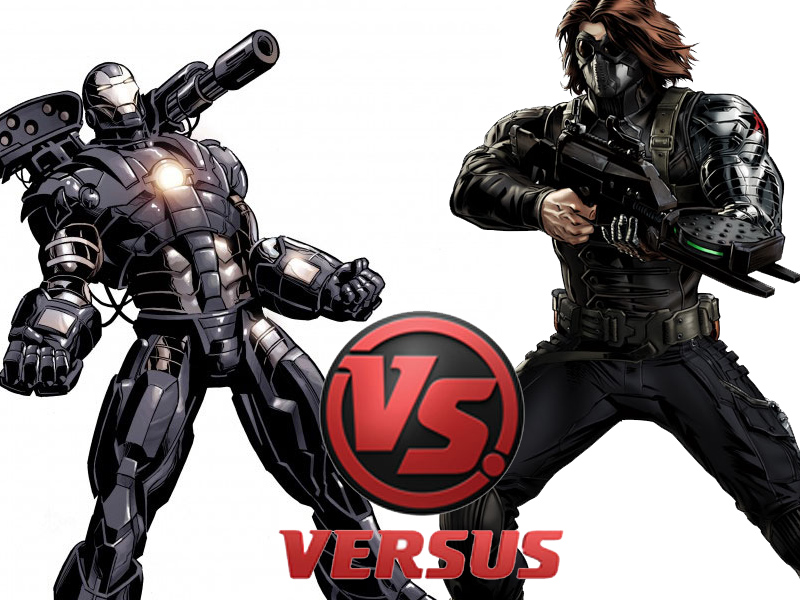 Happy Civil War day everyone!! Yes, the day we’ve all had circled in red on our calendars has finally arrived! Captain America: Civil War is now in a theater near you. To celebrate, today’s fantasy face-off pairs off the right hands of Captain America and Iron Man. These two men have been friends of their respective team captains since before there were teams. Heck, even before there were costumes. That’s right, it’s War Machine vs. The Winter Soldier in our latest installment of “Civil War Tale of the Tape.”

James “Rhodey” Rhodes served as Tony Stark’s military liaison during his days as a weapons manufacturer.  He was also Stark’s friend. Rhodes “borrowed” a suit of Stark’s armor and became War Machine. Eventually picking up official government sponsorship, Rhodes got a red, white, and blue-themed suit of armor and became Iron Patriot. He is now back to being War Machine, presumably because, you know, Civil War.

James “Bucky” Barnes was a childhood friend of Steve Rogers. They served together during World War II. Barnes was believed KIA, but was actually captured and “upgraded” by Soviet scientists. He served Russia as an assassin known as The Winter Soldier for decades before coming into conflict with Captain America. Seeing his old friend overrode decades of programming and Bucky threw off the yolk of Soviet servitude.

Both men have known their team leaders better than anyone else; it only makes sense that they’d be paired off.

First up, powers. Once again, neither of these men have any inherent super-powers, but they both have extensive military training. Rhodes is a Colonel in the USAF, so he’s also familiar with tactics. Where Winter Soldier picks up his edge is with his decades spent as a black-ops assassin for the Soviets. That’s not the kind of training you get in boot camp. It’s also enough to give him an advantage here.

The gear is where it’s at for these two. War Machine wears a Stark Industries battle-suit equipped with cutting edge implements of destruction. As a personal friend of Tony Stark, I’m pretty sure he’s got some stuff in there that nobody else knows about.

Winter Soldier’s main piece of equipment is his cybernetic arm; it has superhuman strength and reaction time, and can discharge bolts of electricity as well as EMPs.  And while that EMP function might cause War Machine some problems, I still don’t think it’s enough to tip the scales.

Finally, let’s look at mental health. War Machine has been shown to be a very level-headed, thorough member of the military. He was chosen to wear the Iron Patriot armor because of his dedication and loyalty. Winter Soldier spent decades having his mind and memories manipulated and “upgraded” by Soviet scientists. He is just now coming to grips with who he is and what he’s done. That is not a stable soldier.

I believe that gives Team Iron Man a clean sweep. Things look bleak for the civil rights of superheroes in the MCU.

No matter whose team you’re on, I hope you all enjoy Captain America:  Civil War this weekend.