Home MOVIES Editorials The Collector Returns to the MCU 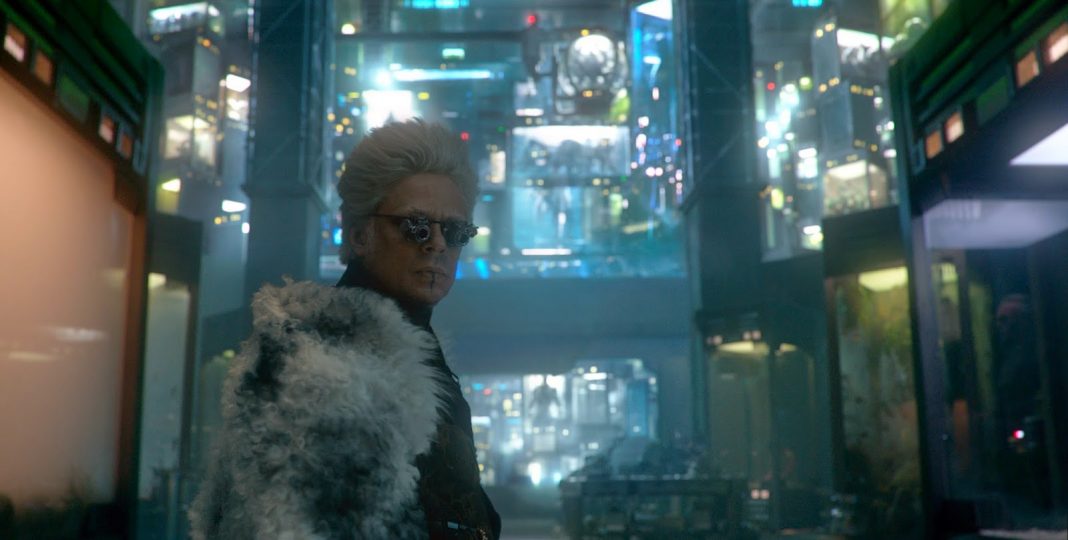 The amount of quality actors that have been brought into the MCU is mind boggling. Oscar winners are plentiful in the Marvel world, and they’re rarely locked into one-picture deals. Plus, with an expansive line of films, there are opportunities for major Hollywood stars to show up in any MCU film. It looks like one of those actors got back to work today. (Re)enter THE COLLECTOR!

The Daily Mail captured this shot of Benicio del Toro walking towards the set of Guardians of the Galaxy Vol. 2. You’ll clearly notice that he is wearing the same white wig and bushy eyebrows for his character Taneleer “The Collector” Tivan. It appears that del Toro is reprising his eccentric character… which is great for fans of the MCU.

While nothing is official until confirmed by Marvel Studios, it’s hard to believe del Toro just happened to be walking around the stage… complete with that ridiculous wig. The Collector will appear in his third Marvel movie. The question now becomes… which one? Obviously, with it being filmed now, Marvel isn’t saving this appearance for Infinity War. So, there are four movies being released by the end of next year where Benicio could pop up.

The movie has to be completely wrapped up production wise, so that means there’s only the possibility that del Toro could be shooting some sort of mid or post-credits scene. But that would seem like a wasted opportunity. Del Toro already did the credit spot in Thor: The Dark World. Why waste an actor with his chops on two mini scenes that really don’t play into the overall narrative?

Of course, if another Infinity Stone is introduced in Doctor Strange, The Collector would become interested in acquiring it. We know he has the aether, and knows where the orb is. Perhaps as an elder of the Universe, he can use his own magic to track down Strange’s stone. Or perhaps he’ll let his boss Thanos know where it is instead. NO!!!

-Guardians of the Galaxy Vol. 2

It’s the obvious answer, right? I mean… he’s shooting on the sound stage where the entire Vol. 2 was filmed. Throw in the fact that he was a pivotal (albeit minor) role in the Guardians first movie, and it wouldn’t be a shock if The Collector stepped directly underneath the James Gunn umbrella.

However, Guardians of the Galaxy Vol. 2 has already wrapped principal photography. Sure, the character could be reintroduced for reshoots, but why would Gunn want to shoehorn in Taneleer after the fact? The same could be said for using him in a post-credits scene. If the movie isn’t going to include an Infinity Stone, it’s probably best to leave The Collector out of the picture. The only thing Gunn could do with the character is allow him to serve as a bridge to the rest of the MCU.

While Guardians of the Galaxy Vol. 2 is probably the most likely destination for a Collector cameo, it seems like it could become a wasted opportunity in using Benicio del Toro. So what about the other 2017 Marvel releases?

Doesn’t make sense… even as an after-credits scene. Don’t hold your breath for del Toro popping up here. Not even worth getting into.

Here’s your dark horse. Unlike GOTG Vol 2., Ragnarok is right in the thick of filming. If a del Toro cameo was in the works with the third Thor outing… this could all make sense. Now, if you’re thinking “wait… aren’t they filming Ragnarok in Australia?” Yes, but that doesn’t mean they can’t use the already built Guardians space set for a quick scene with The Collector. A second unit crew could shoot his scenes and they can splice it with director Taika Waititi’s vision.

The easiest way to work Benicio into Ragnarok? He’s simply talking to his brother, The Grandmaster (Jeff Goldblum); it’s similar to how Thanos first talked to Ronan in Guardians. You wouldn’t even need to shoot del Toro from the waist down. Imagine a weird Collector sharing a scene with an oddball Grandmaster. The scene between those two great actors alone would be worth the price of admission.

At the very least, it’s great to see Benicio Del Toro back with Marvel following his Star Wars sabbatical. It’s nice that Marvel doesn’t just let their big name stars sit on the bench, but instead gets them involved (even in small roles). Should it be Guardians Vol 2., Ragnarok, or even Spider-Man: Homecoming (which would blow my mind), getting someone like del Toro to reprise a role like the Collector is perfect for fans of the MCU. Now if they can do the same with Glenn Close or John C. Reilly.