I’ll say it again: less is more. The teaser trailer for Arrival is intriguing because of what isn’t shown, and it’s a lesson that other studios could follow when promoting their upcoming releases.

Look up, press play, and I’ll elaborate a bit.

See what I mean? Aside from a few glimpses of the ship, there is minimal information about what exactly has landed on good ol’ Planet Earth.

We don’t see what the aliens look like, although we do see the reaction of Louise Banks (played by Oscar winner Amy Adams) to whatever appears at the very end of the trailer.

I’m reminded of Close Encounters of the Third Kind, the UFO classic by Steven Spielberg. He waited until the very end of the film to reveal the aliens. In fact, the linguistic background of the Louise character reminds me of that movie.

We know that the spacecraft is massive. We know that humanity is panicking. It all seems like a legitimate reaction if our planet actually was visited by extra-terrestrial life. And there are more unknowns than knowns, even after the teaser trailer.

Storytelling, and especially cinematic storytelling, has been changed by the Internet and the advent of social media. When a spoiler gets out there, it’s everywhere. It spreads like a fungus… just like a certain meme that hit the Internet prior to the release of Star Wars: Episode VII. Some people were lucky enough to avoid that spoiler before the movie was released. I was not one of them. While this did not diminish my enjoyment in watching the movie, it definitely changed the way I watched. Sometimes the best part of the ride is the journey, not the destination. I like the air of mystery in this trailer. I hope it carries over to the theatrical release.

Go to the official website for Arrival, WhyAreTheyHere.com, to learn more about the movie. 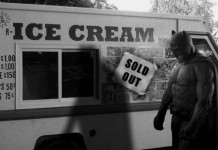