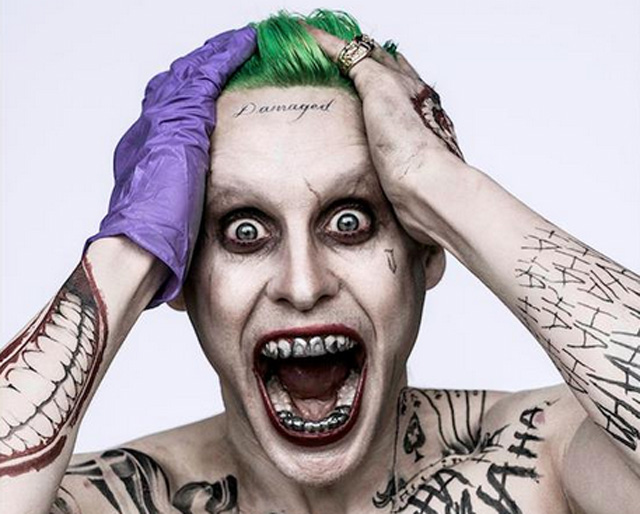 The Joker – although more of an ancillary character inserting himself every now and again to truly baptize the plot of DC’s Suicide Squad in even more, green-glowing crazy – was a force of nature. He was brutal, magnificently insane, appropriately colored, and extravagantly tattooed. Like a true warrior of the street, Jared Leto’s Joker wore the story on his flesh, a fresh aesthetic applied to the Joker mythology decided upon by director David Ayer and actor Jared Leto. One such tattoo has come under renewed scrutiny, the “Damaged” tattoo residing on Joker’s forehead. According to David Ayer, who recently spoke with our good friends at Empire, the history of this particular “tat” deals very specifically with the death of Robin.

“Joker killed Robin and Batman basically smashes his teeth out and locks him up in Arkham Asylum,” Ayer said. “It’s in the asylum where Joker would have done the ‘damaged’ tattoo as a message to Batman saying, ‘You’ve damaged me. I was so beautiful before and now you’ve destroyed my face.’ That’s where the grill comes from.”

Will this particular bit of backstory manifest itself in future DCCU films? Ayer made sure to clarify, “this is sort of my personal thing and maybe less about a larger connection.”

Hmm. Does this mean it’s his opinion, and not DCCU canon, or is he saying it’s a more personal story that he alone will get to explore in some currently nebulous point in future DCCU films?

Anyway, if this is canon...what do you think?