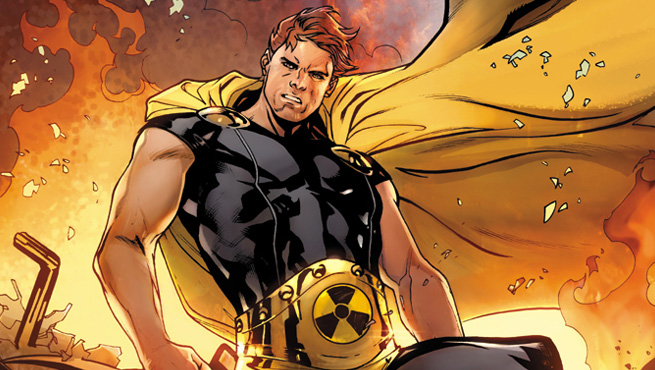 Well, Marvel certainly seems to want Squadron Supreme to be a thing and is going all out to make sure the myriad characters of the Squadron have exposure. To that end, we have Hyperion #1, a book starring the Squadron’s Superman analog by acclaimed novelist Chuck Wendig. Wendig penned some recent Star Wars novels leading up to The Force Awakens, and now, he is playing in Marvel’s playground.

Sadly, the results are mixed. This premiere issue of  Hyperion focuses on a young girl named Doll who is on the run form something sinister. For protection, she hitches a ride with Hyperion – who is evidently a trucker in his downtime – and the two set out on the road. Doll and Hyperion are pursued by a gang of creepy carnies and Hyperion must reveal his powers to save the young girl.

Wendig infuses the issue with some great atmosphere as there is a general sense of tension throughout the issue, and admittedly, these carnies are damn disturbing. Nik Virella, a more than capable artist as evident by his work on Hyperion #1, really creates some wicked and dynamic designs for these carnies, and I admit curiosity to what these carnies want with Doll and what their purpose is. The whole thing reminds me a little of Stephen King’s Doctor Sleep as the carnies are the most interesting thing going on in this comic.

The problem is that this book, at least so far, could have literally starred any hero in the Marvel Universe. Hyperion’s powers fluctuate as one minute he’s being knocked around by the villains and the next, he possesses Superman’s power level. There is nothing dynamic or interesting about the title hero and this could have just as easily been a Wolverine story. In fact, it might have been better as a Wolverine story. Plus, this book is not new reader-friendly at all as there is literally no explanation to who Hyperion is or where he came from. The book is fringe enough as it is; keeping things coyly hidden will not win over new readers or make old ones return for issue #2.

So unless you are a Squadron Supreme completest, the creators give no reason to buy this book. It has a sense of dread infused in the script but sadly, there is no meat on the tonal bone as Wendig delivers a generic, decompressed mystery that leaves readers in the dark.