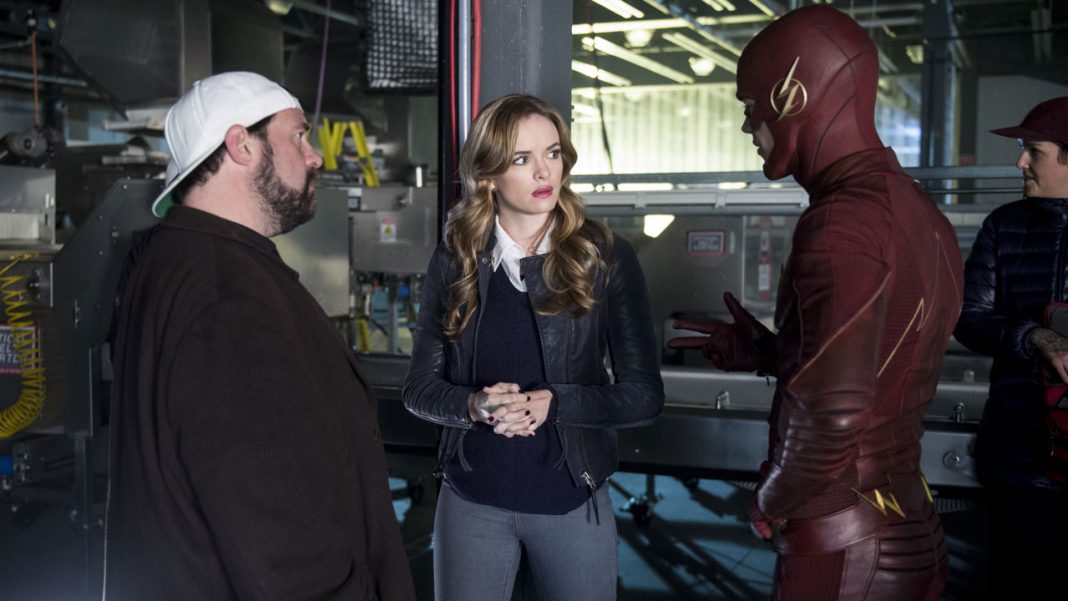 These are the 5 things that kicked us in the gall bladder (and sometimes in a good way) as we watched The Flash Season 3 Episode 7: “Killer Frost.” And, our observations are a little “spoilery,” so…if you haven’t caught this yet,I would bookmark this article and join us afterwards. Still with us? Good, we’re always glad to have ya’.

I usually don’t talk directors in these columns, but I think it’s worth mentioning that this week’s episode of The Flash is directed by Kevin Smith, oh he of Clerks and Chasing Amy fame. I have to give it to Smith, he really steps back and allows the material to shine. There’s none of the signature Smith potty humor and he uses sort of a CW house style to seamlessly incorporate his “Flash” into the series. In truth, not only is this episode not crass, it is the most heartfelt episode of the season with incredibly poignant scenes involving Cisco and Barry, and Kaitlin and Barry. So bravo to Smith for serving the series in such an earnest fashion!

Man, the drama between Cisco and Barry just gets you in the feels, don’t it? This week, due to Kaitlin’s dark turn, Cisco finds out that Barry and Flashpoint are responsible for the death of Cisco’s brother, Dante. Instead of just putting a bow on it all and having Cisco and Barry hug it out by episode’s end, Cisco does not forgive Barry, and his bitter feelings are not eased by the conclusion of the episode. There is still this air of animosity coming from Cisco because of Barry’s action, and really, who can blame him? I mean, after Flashpoint, Barry has Iris and all is mostly well, but Cisco’s loss is profound and I think we’re going to need a season to let these feelings settle.

Holy Elsa, how awesome is Killer Frost? We’ve been waiting for Kaitlin’s cold turn for three seasons now and she does not disappoint. Frost is pure madness and anger, a dark reflection of the sweet and gentle scientist. To me, Doctor Alchemy and Savitar are background threats as the most interesting villain of the season has been the tragic Kaitlin Snow. This is just going to end in icy tears, isn’t it?

You knew they couldn’t get the actor that played Draco Malfoy and not make him dark, right? Yes, kids, it was revealed that Julian Dorn is Doctor Alchemy. Now, the question is — does Dorn know that he is the masked madman? It was kind of obvious that Dorn and Alchemy were one in the same, but the reveal still packed a wallop because there is so much conflict between Barry and Dorn that it’s hard to imagine things getting more intense. But now that it is revealed that it is Dorn beneath that gas mask, things are about to get even harsher.

Freakin’ finally! Wally has his super-speed, he is in his right mind, and he is ready to become Kid Flash. We even had a mention of Wally’s comic book stomping grounds, Keystone City! So, let’s get the red and yellow going and introduce the one and only, legit Kid Flash to the world.