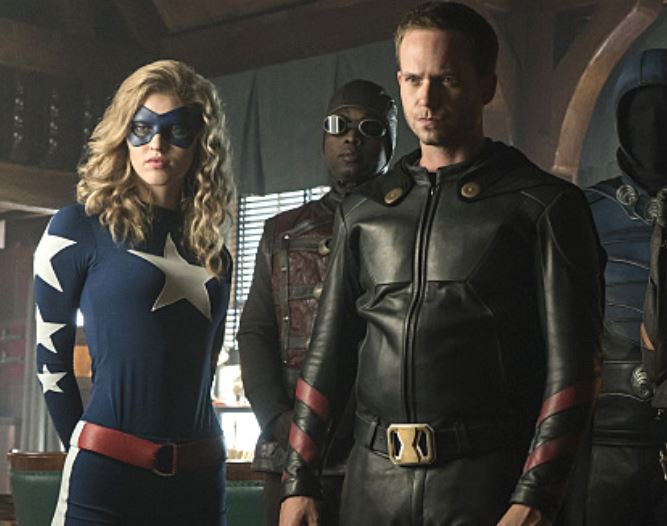 We’ve been telling you about it, and telling you about it, and here it is. When the Legends of Tomorrow return in their sophomore season, they’ll be meeting the equally legendary DC super-team, the Justice Society of America, in the aptly titled second episode, “The Justice Society of America.” Yep, the Legends will run into DC Comics’ first superhero team when they land in Nazi-occupied Paris, meeting up with the likes of Vixen, Commander Steel, Dr. Mid-Nite, Stargirl, Obsidian, and Hourman. Wondering what the JSA will actually look like in their CW incarnation? Wonder no more! It’s our first official look at the assembled Justice Society, as well as additional stills, and an equally official plot synopses for episode 2. OBSERVE!

And here’s the official plot synopsis for Legends of Tomorrow Season 2 Episode 2: “The Justice Society of America”:

“TEAM WORK — The Legends travel to Nazi-occupied Paris, but find themselves surrounded by the Justice Society of America (AKA JSA.) The Legends discover a time aberration that threatens the JSA, but the JSA wants nothing to do with them or their help. Nevertheless, the Legends force their way into the JSA’s mission to intercept and seize a mysterious package. Nate (Nick Zano) is desperate to prove that he should be part of the team, but he has a secret that he shares with his grandfather Commander Steel (Matthew MacCaull) that might make it difficult. Ray (Brandon Routh) is so focused on impressing the JSA, he puts himself and Vixen (Maisie Richardson-Sellers) in danger. Meanwhile, Stein (Victor Garber) has stepped in as the leader with Rip (Arthur Darvill) gone, but when decisions aren’t being made Sara (Caity Lotz) seems to be the one calling the shots. Dominic Purcell and Franz Drameh also star. Michael Grossman directed the episode written by Chris Fedak & Sarah Nicole Jones (#202). Original airdate 10/20/2016.”

LoT returns to The CW on October 13th!