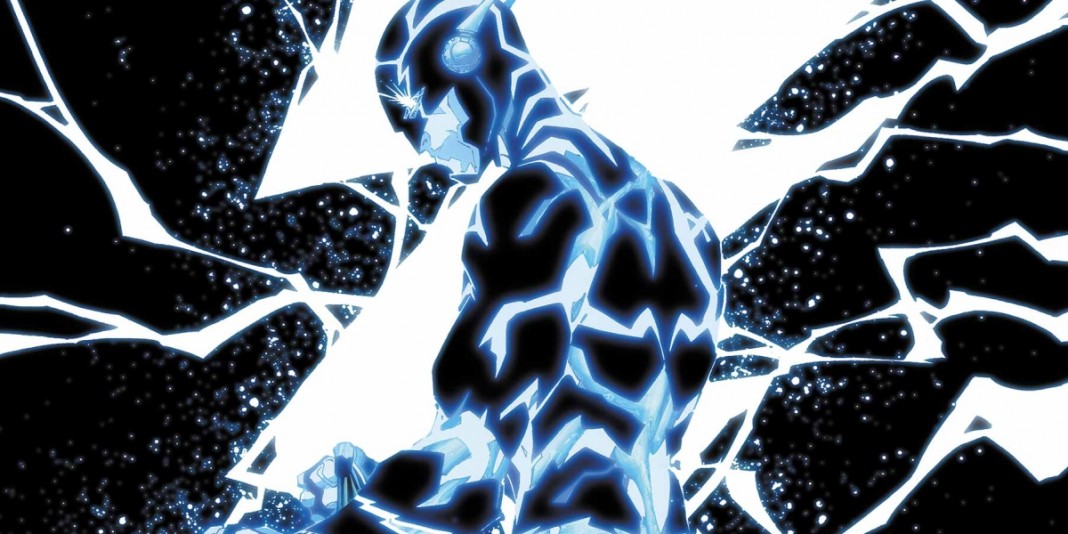 The Flash twitter page recently released an incredible looking image of current series antagonist, the mysterious Zoom! AH! Terrifying! Of course, seeing another picture of Zoom smacks me in the face with an obvious, ever-present question: who is Zoom?? Well, I have a few theories – 4 suggestions, specifically – regarding his identity, but first, let’s take a look at that ominous, tweeted Zoom poster I was going on about.

Can the forces of good triumph over an evil so dark? Don’t miss a new episode of #TheFlash TONIGHT at 8/7c! pic.twitter.com/gYF3RHcCcq

AH! Still scary! Anyway, Zoom has been making life hard for Barry Allen. Very, very hard. Besides crossing dimensional membranes and personally belittling Barry, he’s sending evil, twisted versions of Golden Age DC heroes to our humble “Earth Prime” locale; they’re effectively pre-beating the snot out of Barry so he can receive a proper beating (and re-beating) at the hands of Zoom. Anyway, yes, Zoom’s a d*ck and we know why he’s a d*ck (wants to feed on BA’s speed), but just who in the HELL is he?? A few thoughts:

Earth-2 is filled with twisted, counter-versions of ourselves as evidenced by the invasion of super-villains who, in the comics, were actually superheroes. Atom Smasher? He’s a legacy hero with an identity originating from DC’s Golden Age and a modern Justice Society stalwart. But in this particular Earth-2 iteration, Atom Smasher is a freaking bendy-armed, energy siphoning criminal. Yes, we’ve seen Barry from Earth 2 in his classic, Golden Age attire and appearing completely tepid and humorously harmless…but what if this is all an act? What if Barry is all grown up and, due to a host of unexplained circumstances, decides to rid the Multiverse of any and all speedsters currently drawing power from the Speed Force? Greedy E-2 Barry!!!!

Yup, it’s Barry’s father. This would explain why, after being freed from wrongful imprisonment, he decided to leave in order to grant Barry his space. Or something. Honestly, this particular scene was very poorly conceived and therefore poorly written; it was definitely a bone of contention for me for quite a while (among other contentious bones). BUT…if you explain his absence due to extracurricular activities including terrorizing Earth-2 and sucking other Speed Force carriers dry? Well, then…I might be able to overlook that little narrative hiccup.

Wally is MAD that his father never came to claim him! Well, that’s kind of how it is here on “Earth Prime.” Perhaps on Earth-2 this hatred and resentment have properly simmered into a delectable bit of revenge soup, leading Wally to – after suffering a similar lab accident (or car accident?) linking him to the Speed Force – punish Barry Allen, aka The Flash, for being the focus of Joe West’s familial affections.

Yes, he sacrificed himself to end the Thawne genetic dynasty (at least, in THIS universe), but – and I’m referencing what I enclosed in parenthesis – the self-inflicted end of the Thawne legacy erased only one, singular, Multiversal iteration. There’s a freaking poop-ton of Earths out there, all potentially birthing embittered Eddie Thawnes watching the love of their collective lives, Iris Allen, perpetually gravitate towards Barry Allen. So, maybe Earth-2’s Eddie (or any Eddie from ANY Earth) never took it upon himself to make that final sacrifice for the good of mankind. In fact, maybe this particular Eddie not only skipped the whole self-sacrificing bit, but survived to become ESPECIALLY EMBITTERED! If you’re up on your Flash comic book history, you know the Thawnes are ALWAYS out to end the Flash, and they’re completely immune to the boundaries of time, space and…levelheadedness.

Ok, so these were my 4 suggestions. Anyone want to chime in and help me expand my list?