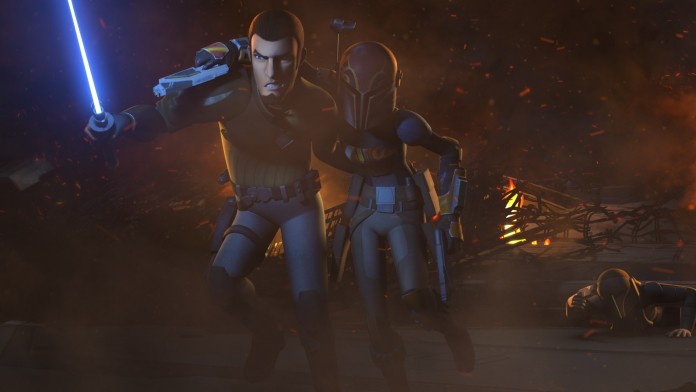 A Jedi and a Mandalorian walk into an Empire controlled system… you know how this is going to play out.

Since returning from it’s winter hiatus, Star Wars Rebels has hit two solid home runs.  Last night’s episode… “The Protector of Concord Dawn” continued the Rebel Alliance’s struggle in escaping the wrath of the Empire.  It also pushed one popular character into the forefront.

We begin with the crew of the Ghost once again volunteering to run a sketchy mission for the rebels.  The goal: get safe passage past a planet being maintained by Mandalorians… Concord Dawn (The former home of Jango Fett).  With everyone’s favorite Twi’lek Hera running the mission, she turns to Sabine for assistance.

Needless to say, the mission does not go as planned (does it ever?), and our heroes barely escape.  Hera gets the brunt of the Mandalorian’s attack becoming severely injured in the process.  When you mess with one member of Ghost you mess with them all… and in retaliation… Kanan and Sabine head out to avenge their friend.

This is when the episode become a visual yin-yang.  While the Jedi Kanan Jarrus hopes to speak reason with the Mandalore leader Fenn Rau, Sabine channels her inner warrior and heads out for revenge.

It’s great to finally see Sabine show off her Mandalorian skills.  A daughter of a member of “Death Watch” (you remember the renegade group from Clone Wars), she comes from a lineage of badasses.  However, Rebels has kept her constrained.  Sabine rarely shows off her technique, serving as backup.  Supposed to be a former Bounty Hunter, it took a season and a half before they unleashed her… and it was great.  Sabine and Hera have the potential to be remembered in Star Wars lore alongside Princess Leia and Rey, so lets hope Rebels gives them more time to shine.

Following Sabine and Kanan taking out a group of Mandalorians… they chase down the group’s leader Fenn Rau, culminating with an epic aerial showdown with Kanan clinging to Rau’s ship.  Rebels has finally figured out the formula for terrific Jedi showdowns… and this battle is no different.

With Rau captured… the rebellion has its passage through Concord Dawn (since the Mandalorians won’t let the Empire know they’ve been one upped).  Hera also recovered from her injuries… just in time for another episode next week (what a coincidence).

So far so good with Star Wars Rebels in 2016.  Only two episodes in, the show has already delivered compelling emotions to its characters.  We’ve gotten to witness Sabine and Ezar struggling to deal with their past.  We’ve also got Kanan adopting a “no kill” policy and truly becoming the Jedi he once trained to be.

With Star Wars Rebels finally hitting it’s stride, now is the perfect time to start watching… especially if you need your Star Wars fix after watching The Force Awakens for the tenth time.