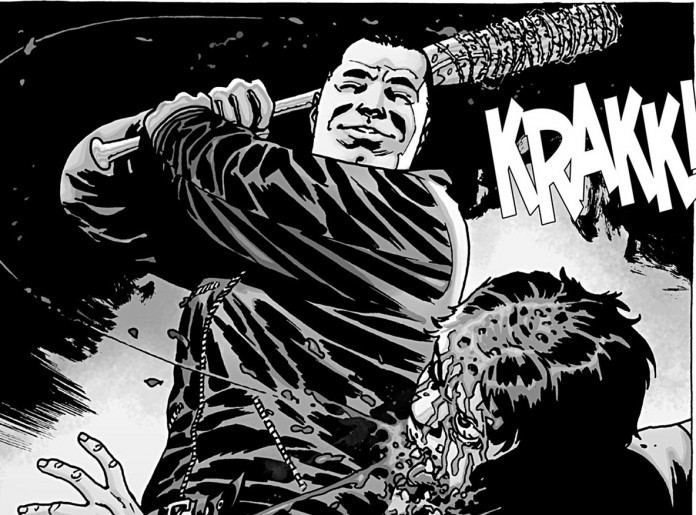 Well, that was certainly a rough one, wasn’t it? This past episode of The Walking Dead saw a ton of death and carnage…certainly more than normal for a show whose standard fare is legions of ravenous undead, that’s for sure. So, what are my thoughts on The Walking Dead thus far and where do I think it is heading?

First things first; I’ve read a bunch of the comic books and I’ve seen what I would consider ‘spoilers’. I’ve been lacing my conversations regarding the future with constant hints and whispers to friends and family. That being said, there are characters that are just expected to die after a certain point. I always knew that Lori and Shane were on the way out and I started to believe that another character was going out too with the arrival of a new character but again, I might be getting ahead of myself. We will return to this conversation later!

I’ve felt that the three episodes of The Walking Dead so far have been better than the previous season but they appear to me as becoming somewhat formulaic. Not that I’m complaining it just seems that the first half an hour of each episode is mostly character building but then right after the 32 minute mark BAM! The proverbial s#1% hits the fan! I feel like that is most pronounced in the last two; I found myself pulling away during the second episode only to have Carol go all commando style. Impressive, methodical, and cunning…Carol is a beast to be reckoned with and commands a certain degree of attention. This episode saw the same plot-direction followed again; the ‘random Alexandrians-you-know-aren’t-making-it-out’ exposing their varying differences and beliefs while comparing themselves to Rick’s Group…only to have most of them not make it. Surprise, surprise! Honestly, haven’t these guys ever heard of a mercy kill? Also, I think Michonne could have saved that one girl but I digress. The real shocker I think you guys are all here for is……

Glenn! Yeah, I’m a little surprised by that. When I spoke earlier about knowing how the comic book goes, we all know that Glenn meets an even more gruesome demise in the comic books with the introduction the series next ‘Big-Bad’. You thought the Governor was bad? Sheeesh! Wait till Negan shows up. I’ve seen some people say that Glenn might have survived that attack, but I’m not entirely sure. It looked awfully convincing to me and to ‘fake-kill’ him only to have him die later would just be too cruel to us viewers. How did I feel about that whole exchange? I almost felt pity for jolly good ol Nick…in spite of the fact that I really wish he died several episodes ago. The way they shot that zombie horde grasping for Nick and Glenn with the washed out sound reminded me Saving Private Ryan but I didn’t see any zombies walking around with intestines or arms…at least their own that is! (Rolls eyes)

So how do I feel about this episode? Did Glenn’s rather traumatic death advance the story? We will have to see; within the context of the book Maggie was pregnant which only made Glenn’s death that much more brutal. Will they continue with that thread? I guess they are right – the moral center of the group is pretty much a death sentence on a show like The Walking Dead. If anything, this episode showed that even the ‘main characters’ are not above being killed by zombies. My only real question is who will be meeting Lucille, eh?