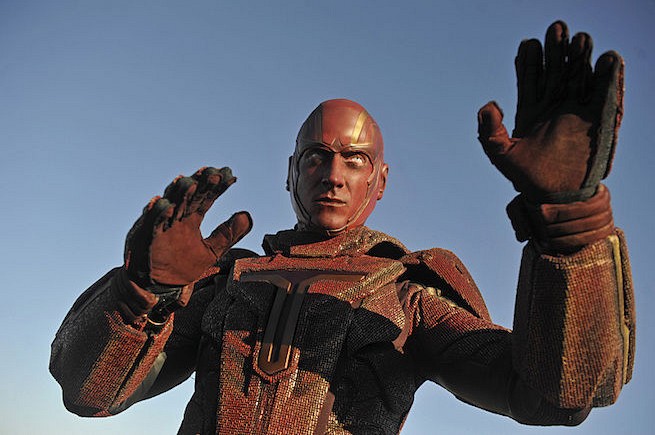 Check out Our Review [WITH SPOILERS] of Supergirl Episode 6 Season 1: “Red Faced.”

I must admit, for a while there I was a bit put off about Supergirl Episode 6. I saw Supergirl having temper flare-ups, and why? The episode made it seem like these little fits of Kryptonian anger were over Kara’s dismay regarding the James Olsen/Lucy Lane relationship. I was like, really? The show is going that far down the soap opera route that Kara is so jealous over an established relationship that she is losing her “S” over some love drama? Then, Supergirl Episode 6 pulled its final card of the week, and damn was I impressed.

Before we get to the episode’s climax, let’s talk about the loaded week. First we have Red Tornado. When the images of the classic DC hero hit, fans were not kind. Yeah, the design was a bit bulky, but you know what, so was the original Red Tornado design from the Silver Age. But be that as it may, the TV Red Tornado design looked pretty good in action. With the twisting, and the tornadoes, Tornado looked like his old school Super Powers action figure, and that’s ok with this old school nerd. Your mileage may vary on the look of Tornado, but the effects that were used to bring this classic DC robot to life were impressive as Supergirl continued to push the boundaries of TV FX.

Supergirl Episode 6 also introduced Sam Lane, father of Lois and Lucy and alien hating military bigwig. Sam wanted Supergirl to help him test his Red Tornado robot and he was every bit as xenophobic as he is in the comics. He wasn’t quite on the William Stryker from X-Men level, but he was close. Plus, we never saw Stryker get involved in the dating life of one of his children.This week, we had to see poor James Olsen squirm under the scrutiny of General Lane. Lane disapproved of Olsen because the former cub reporter is pals with an alien-Superman. The friends with an alien thing was a pretty sledgehammer-like analogy for the race thing, but still, it made the issues in James and Lucy’s relationship that much more understandable. Sadly for Kara, it also brought Lucy and James closer together. And while I’m talking about the show’s relationship drama, that game night sequence, where the episode showed how close Lucy and James are through their skill at Scattergories, yeah, not the series’ finest hour.

But the battle with Red Tornado might have been as it was every bit impressive as any super hero battle on the big screen. All of Tornado’s powers were front and center, the spinning, the whirlwinds, the tornados, and it all looked great. Of course, just like in the comics, it was the Red Tornado’s creator, T.O. Morrow, who took control of his creation, causing it to wreck havoc on National City. That’s where the show went a bit south, as Morrow’s motivations were not explained. He was just a smarmy British guy who turned against Sam Lane and the US for, you know, reasons.

But Supergirl Episode 6 was really about Kara’s heart and humanity- as it usually is. Kara was having trouble keeping her temper, something she must always do in a world that, to her, must be made out of paper. During the course of the episode, Kara lashed out at a rude motorist, and in her first encounter with the Red Tornado, became uncharacteristically brutal. The episode made fans think that it was because of Lucy and James, or perhaps it was about her domineering boss Cat Grant that caused these super tantrums. It would be unforgivable for Supergirl to lose control because of job or love woes; it would go against everything that was established about the character both on TV and in comics. But it wasn’t about love or career, Kara’s anger was over losing her mother and her planet, over being thrust away from a warm and loving home and forced into a world where she can never truly fit in. That’s why Kara was angry and that reveal was brilliant, it added a layer of depth and heroism to an otherwise already great character. Imagine all the great things Kara has done both as her civilian self and as Supergirl, while deep down, she was really just a really young girl who missed her mommy. Great stuff.

Speaking of mommies, Supergirl Episode 6 introduced Cat Grant’s shrew of a matriarch this week. If you thought Cat was bad, wait until you get a load of this uncaring, domineering piece of OMG. A big ‘ol puzzle piece fell into place regarding Cat this week because her mom would turn even the softest heart into stone. Kara and Cat had a great bonding session after Kara stood up to Cat as the show dealt with some societal gender expectations of temper. Cat told a great story of Perry White throwing a TV through a window and how women can never lose their temper in the modern workplace. These were lessons Kara took into her battle with Red Tornado as Cat continued to grow into Supergirl’s surrogate mom figure.

Kara was able to harness her temper to defeat Red Tornado and sadly, the robot was destroyed. Meanwhile, Alex was able to track T.O. Morrow and take down the scheming scientist but not before the Tornado gained sentience prior to his destruction (and by the by, Alex was also cozying up to Maxwell Lord this week). Hopefully, this isn’t the last we will see of the Tornado as the episode did not even have Red speak. There’s more to this character, and hopefully at some point we will get to see the Red Tornado rise to become the hero fans have loved for decades. But if you were one of those people who bashed the robot’s look months ago, wait until you see this classic hero in action!

To round things up, we also got a bit more on the mysterious Hank Henshaw. Turned out that Henshaw once disappeared in the same incident that took the life of Kara’s Earth father. Henshaw has no memory over what happened but he was the last person to see Kara and Alex’s dad alive. That makes those glowing red eyes much more ominous, huh?

Supergirl was renewed for its back nine episodes by CBS and between this show, Marvel’s Jessica Jones and the coming second season of Marvel’s Agent Carter, this truly is the golden age of female driven superhero TV. At times Supergirl goes a little too far in the soap opera zone (Scattergories?) but with the best superhero fights on TV and the most likable girl on TV, this is a show that has earned those back nine.