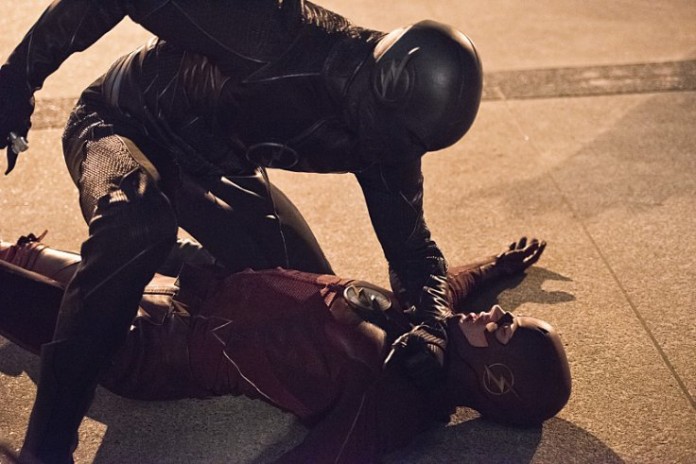 Wow. What else can be said. I mean….wow.

Last season, Harrison Wells/Eoboard Thawne/Reverse Flash was a big bad for the ages. Going into this season, it was clear that The Flash would have a difficult time replacing Wells as the key villain. What villain could make us feel the heightened stakes with such elevated, personal meaning? Captain Cold is more of a shades of grey tweener; Gorilla Grodd is awesome but could they really build a season around a giant ape? I thought The Flash might have to scramble to find a villain that could make season two bigger and badder- but by golly, with Zoom, they did it.

Zoom might be the scariest villain to ever appear on DCTV. He reeks of menace, ill intent, and malevolence. This week, Zoom appeared for the first time in all his dark glory to Team Flash and Barry, well…Barry didn’t fair very well. Barry got his little red jump suit handed to him.

How did it all go down, you ask? Last week, the Earth 2 version of Linda Park arrived on Earth 1. This version had the power of Dr. Light which was a bit annoying because in the comics, Dr. Light is her own character, not a doppelganger of the Earth 1 version of Park. This all kind of seemed forced but it all worked out this week as the real Dr. Light disappeared and escaped STAR Labs; Flash and company enlisted the real Linda – who pretended to be Light- in order to convince Zoom that Barry was killed. The whole thing was breezy and funny as Park found out Barry’s secret ID, a fact that will probably be an important reveal if and when Wally West shows up.

Park tried to master Light’s powers (ably recreated by Cisco) and it was laugh out loud funny. It also went a long way in making the viewer care about Linda, a character that was pretty flat last season. She wanted to avenge her boss who was murdered by the real Light last week and was willing to put her ass on the line to do it. And while it would have been nice to not have two of DC’s few female Asian characters mashed into one amalgamation, having Linda be Light did help Park’s character grow.

Up until Zoom’s arrival, the episode was very humorous and even quite sweet with Barry’s romance with Patty Spivot reaching the next level of “awwww,” but when Zoom arrived, things changed. Zoom, voiced by Tony Todd (awesome), rag-dolled the Flash, beat him to a bloody pulp, and even caught one of Flash’s lightening throws. It was all quite brutal and hard to watch as Barry was beaten in front of his friends. He had no chance against Zoom and every blow proved that the black-clad speedster was a new level of foe.

Flash was beaten and hung lifelessly from Zoom’s arms as Zoom gave an ultimatum to all of Barry’s friends. Barry managed to struggle free and hurt Zoom, who retreated, but not before we discovered that Barry had lost the use of his legs. It was a shocking and effective reveal that made me long for next week as now, six episodes in, we have kickstarted season two in earnest.

But who is Zoom? There are so many theories about who could be beneath that black hood but I’m just going to enjoy the ride and watch how Flash and his friends discover how to defeat their most dangerous foe.

But Team Flash has a new friend, the Earth 2 Harrison Wells. This week, we discovered why this version of Wells is so volatile and cantankerous. Back on Earth 2, Wells had a daughter, a brilliant and brave young woman named Jesse, and if you’re thinking that the name Jesse is important to Flash lore you are correct. Wells’ nickname for his little girl is “Quick,” so yes, It looks like Jesse Wells will become Jesse Quick at some point. Now listen, I am a huge Johnny Quick fan (yes, we exist) and am disappointed that the second most important Golden Age speedster won’t be playing a role on the CW, but having Jesse be Well’s daughter added a new dynamic to the second version of Harrison Wells. It also provided a motivation for Wells 2 as Zoom has captured and imprisoned his daughter. Thanks to Cisco’s “vibing,” Wells discovered that Jesse is alive so Team Flash has a new and brilliant ally very motivated in taking down Zoom.

But that was a little bonus bit of coolness; the main event was the sheer monstrosity of Zoom and the deepening of the mystery regarding Zoom’s identity. This week, we met a very intense baddie for season two, a villain that seems like Barry’s greatest challenge. But with Jay Garrick around and Jesse Quick now on the scene, Barry might be getting some speedy help very soon.

Now, Barry has to recover from his injuries, but we’re hoping he does this quickly. Why? Because it looks like Grodd is set to make another appearance. Uh-oh.

As a great man once said, “Business is about to pick up.”