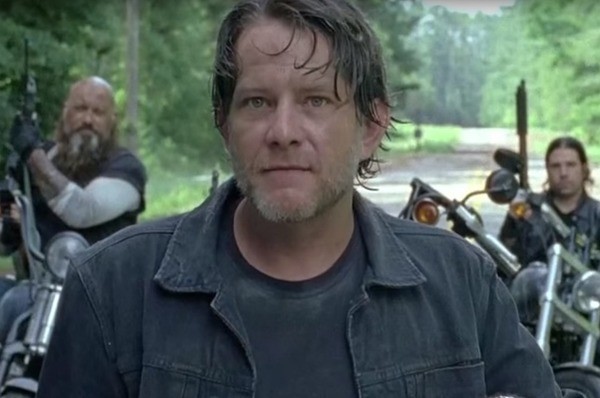 The Walking Dead has been slowly building to something. At the start of Season 6 it was made to appear as if they might finally be able to find a modicum of civility and safety among the simple townsfolk of Alexandria. However if that midseason break taught us anything is that everything was about to boil over like some insane carnage soup. What will the Walking Dead Season 6 midseason premiere have in store for us? Will our intrepid group of happy-go-lucky (that’s code for entrails covered) survivors make it out unscathed or are things about to ‘get turned to 11’ in the Walking Dead Season 6 midseason premiere?

So right out of the gate we get an introduction by proxy for Negan. As much as it was nice to see Rick and Company play house for a spell this series desperately needed a new ‘Big Bad’. I have to say, I like that little lieutenant of Negan’s. He played a good villain in a ‘corporate sycophant surviving in a post apocalyptic world’ or at least that’s the vibe I got from him. Then…KABLAMMMO! I guess that’s why he was chewing up that scenery…had to make the most of it while Daryl figured out how to use a bazooka. Pretty awesome, eh? At least that sends a clear message to Negan and to us who watched.

Did anybody else chuckle out loud when Father Gabriel volunteered to take Judith? I even think she looked concerned and I’m a bit surprised that Rick let him take her. I felt like that was making things unnecessarily tense…or just removing Judith out of the equation all together while the rest of the plot figured itself out. Did it also feel a little rush with that pep-talk from Rosita? ‘We need to make a plan, we need to check on Carol and friends, and then we can go’ and then they take two steps over and they are right there. For a second I thought they were going to slow the pacing down a bit but no, they kept it rolling. That’s one thing The Walking Dead is good for…intense premiere episodes. Everybody’s doing something! Glenn and ‘JSS’ Girl and Wolf-Boy and Nurse-Lady! If only somebody had an RPG in those groups or something. Those things can pretty much make anything a bit more exciting, no?

I think if I was ever stuck in situation where I was holding hands while covered in zombie guts, I would start singing ‘Kumbaya’ or at the very least humming very loudly. That kid probably should have been doing that…would have helped to focus mind a bit. Ouch. That was rough…okay, that was really rough. Things can go south really quickly, can’t they? You really saw the emotion streak across everybody’s face; from the Mom losing her son to Mom getting eaten to Rick seeing that future die to Carl waiting for orders. And there we had a classic scene right from the comics…smack dab in the middle of that proverbial s*** storm. Kudos to that whole scene. Tense and just ugh…but ugh in a good way! A good way that I am reminded that The Walking Dead can still invoke some rather intense emotion.

So how is Wolf Boy and Nurse-Lady able to slide through that crowd? Wouldn’t they able to smell the blood in the air from that open wound? I’m really not quite sure how to read either of those characters at the moment. I guess zombie sense of smell works as good as it needs to fit the scenario. Just a minor gripe though. At least we have one alpha-predator in play..Carol who dealt with my uncertainty regarding Wolf-Boy. His fate was slated to be at the hands of Carol anyways. You could say that she was…gunning for him? I’ve been hanging around people who enjoy bad jokes a little bit too much. I apologize!

Did anybody else feel strangely satisfied with seeing Rick go on a straight up berzerker frenzy? It always seems like once the group finally starts to stand their ground in episodes that they then become a force of unchecked destruction. They spend all of that time running and when they finally turn and stand the line the results are often spectacular. Suppose that’s the ‘flight-or-fight’ response in a nut shell and highlighted with the magic of the undead. Always time for a biology lesson in betwixt zombie mercy killing! Poor Glenn…his death always seems so ever close. Again, I’m going to hark back to one of my earlier statements and say that this episode definitely makes me feel as if all of the characters are in danger and that’s good for a show that’s 6 seasons deep.

Was Michael Bay one of the producers for this? Joking aside, going all Johnny Cash style on those zombies was a smart and gratifying move on Daryl’s part. Nothing like a burning ring of fire and some series music overlay to help cap off the Walking Dead Season 6 midseason premiere as everybody gets a zombie montage. That is one way to show off that the people of Alexandria are now battle harden, right? You gotta have a montage! Ahem. Then we finish the episode with Rick monologue-ing over Carl while saying ‘Carl’ in that well-received internet voice. You know which one I’m talking about. All in all, the Walking Dead Season 6 midseason premiere was a nice return for the series. Hopefully the Walking Dead will be able to keep up the momentum. As always, you can get your Walking Dead gear from SuperheroStuff! When the zombie apocalypse comes, you’ll be the cheeky person in the zombie shirt! ‘SEE? I TOLD YOU SO!’

3 Reasons Why The Amazing Spider-Man (2015) Comic Is AMAZING!