Batman has had a rough time in video games, constantly under siege and criminals constantly taking over varying aspects of Gotham. At the end of Arkham City, you get to witness a rather pivotal change in Dark Knight mythos and that’s with the death of DC Comics’ Clown Prince of Crime by his own hands. Hey, Batman was about to save him!

It is that backdrop that Arkham Knight picks back up (Arkham Origins was a prequel and done by a different company). The opening scenes of the game has Jim Gordon explaining what happened after the Joker died and after that monologue it is left up to the player to torch the body of the fallen Joker by pressing any button. I spent quite some time before realizing this and there is something to be said about being the hand that sends that crazy-man into the great beyond.

From there, the game shifts to a beat cop going into a diner. After some banter about what to order and not telling one’s wife, a patron approaches the police officer and asks him to stop somebody smoking in the corner. Needless to say, things escalate very quickly and the Scarecrow manages to empty out all of Gotham with a threat a few ounces of his new strain of Fear Toxin.

Batman then steps up to the plate and its pretty much business as usual for this immensely popular series. You get lots of the upgrades from Arkham City automatically with this one; you’ll have your grapnel boost and all that for easy soaring over the city. However, when it becomes apparent that Batman needs some additional firepower the true deviation of the Arkham series shows up; the Batmobile! Some reviewers have said that it feels a bit too shoehorned into many aspects of the game but I feel like it adds another layer to the gameplay absent from others in the series. Had they not put the Batmobile in people would have been complaining that it is more of the same and, for the most part, it is. However, it does augment the already super sweet playing of the game with a bit of fresh air.

Other aspects of the game that seem to have received a polishing is the detective aspect of the Dark Knight. He analyzes crime scenes at far more frequency than the other games and I feel that this adds to his persona besides the violence. He is one of the world’s best detectives after all and these little mini-games help to get that point across.

As usual, the voice acting of Kevin Conroy and others make this game a living movie. Scarecrow is particularly scary with this version where his skin and mask have fused to become a truly terrible visage to behold and the talents of the Steward of Gondor’s voice adds a mechanical and terrifying methodology to his character. I often found myself stopping and listening whenever Scarecrow had something to spout off at Bats. I will also say that the Joker, despite being dead, has some rather interesting interactions in the game but as the start of the game established…HE IS DEAD! How do they manage this? Oh, I guess you’ll have to play to find out!

All and all, this game is massively impressive and a great addition to the Arkham franchise and a great way for Batman to make the jump to the next generation of systems. I am only a little bit in but it is definitely shaping up to be my favorite in the series. Stay tuned for my ‘I 100% this game’ article for my full impression! 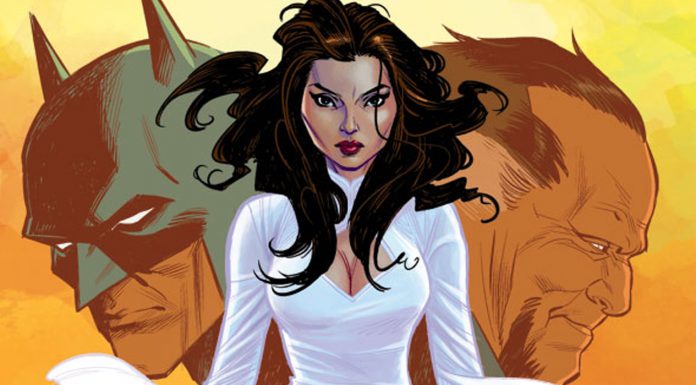 Talia Al Ghul Comes to Arrow Season 5: Meet the Actress, and Learn About Her CW Debut