Hideo Kojima. He’s either a certifiable genius or a total whacko…or a little bit of both depending on your taste! After a well-publicized falling out with Konami, legendary video game creator Hideo Kojima called it quits. Known for his vaunted Metal Gear series and the ill-fated Silent Hill, Hideo Kojima exudes a tremendous amount of weight on his projects. His latest game, Death Stranding, sees Hideo Kojima pick up Norman Reedus of Walking Dead fame. The above video is the E3 trailer for Death Stranding and sees Norman Reedus buck-naked and surrounded by ghostly hand prints and dead sea creatures. Yeah, that sounds just like something Hideo Kojima would do!

He continued, “Most of your tools in action games are sticks. You punch or you shoot or you kick. The communication is always through these ‘sticks.’ In [Death Stranding], I want people to be connected not through sticks, but through what would be the equivalent of ropes… But of course you will be able to use the sticks too.” At least that’s a little different than basing an entire game off Dwight Eisenhower’s final speech, right? Either way, we’ll be keeping an eye on Hideo Kojima and his latest project! 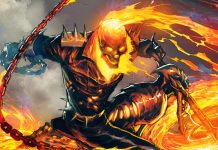 The Art of Landing a Superhero Role

Steven Spielberg Weighs in on the Superhero Movie Trend