Hopefully you have enough minerals and Vespene Gas come November 10th because we will finally get the final story expansion for Blizzard’s Starcraft 2! We already played the political shakeup game in Wings of Liberty and we made creepy crawlies during Heart of the Swarm but now we get a chance to embrace the Khala and unite the fractured Protoss clans! Those guys never quite recovered from having a giant bug hive-mind embedded onto their planet but eh, I guess time heals everything! This StarCraft 2: Legacy of the Void trailer from Blizzard showcases their always impressive cutscenes and focuses on their Artanis character…who has been around since StarCraft but now he finally gets a chance to shine! Get out from underneath Zeratul’s shadow, Arty!

StarCraft 2: Legacy of the Void picks up with a vast intergalactic threat that will require all sides to work together. You thought the United Earth Directorate was bad during the Brood War? Try a vast, psychic Cthulhu-like entity trapped in a black hole that has been directing and corrupting the Xel’Naga, Protoss, and Zerg from the very get go! You may need quite a few Siege Tanks, Ultralisks, Carriers, Banelings, Reapers, and Colossi to make it out of that one. 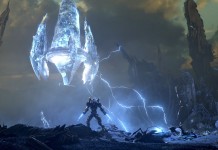 StarCraft 2: Legacy of the Void Review