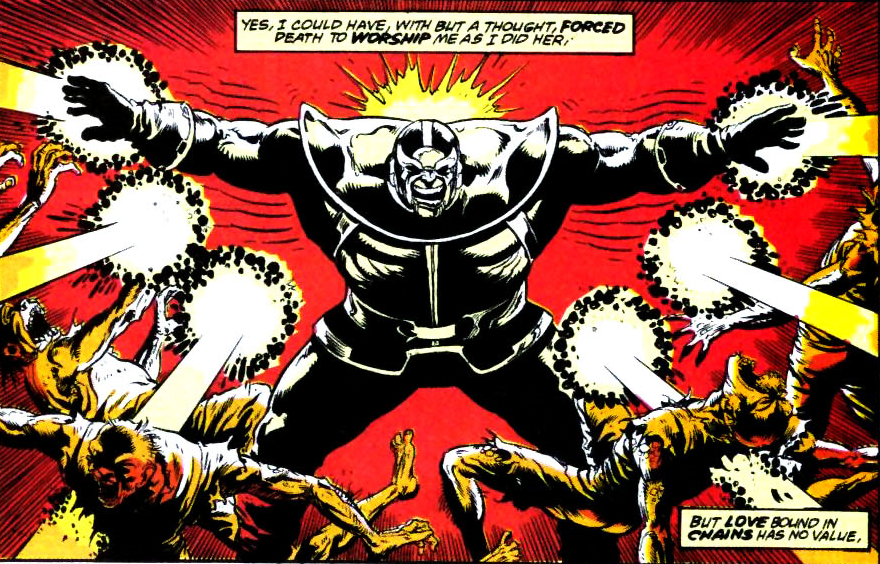 Just because 67 ‘effing characters aren’t enough to satiate our nerd-errific thirsts, there are still a handful of characters we’d like to see when Avengers: Infinity War hits the big screen on May 4, 2018. It would be a darn shame if these 5 cosmic characters didn’t show up in the movie, and we truly believe that after reading this list, you’ll totally agree that they’re ABSOLUTELY NECESSARY!

The most obvious hero that should definitely be in Infinity War is none other than the cosmic character Adam Warlock. The whole Thanos war thing won’t be complete without this space-dwelling and magical ass-kicking wizard, and as one of the most powerful beings in Marvel comics, he’s the one who leads Earth’s Mightiest Heroes in the battle.

Adam Warlock is actually a genetically engineered organism created by the Beehive in their attempts to forge the perfect being. In the comics, he’s the one who carries the Soul Gem, but in the MCU, it’s Vision who has the glowing thing on his forehead. That might mean Adam Warlock has been replaced by Paul Bettany’s character, but we can still hope, right?

After all, there was that big cocoon from The Collector’s vault in Guardians of the Galaxy, and yes, that regenerative cocoon is where Adam Warlock slumbers oh-so-peacefully until his supposed rebirth. If Marvel decides to show Adam Warlock hatching from the cocoon and rallying the heroes together in a post-credits scene, every single fan in the audience will definitely pee in their pants.

Collective pants-peeing aside, Adam Warlock’s appearance should also come hand-in-hand with the appearance of his evil alter-ego, The Magus. Warlock’s Dark Side forges malevolent doppelgangers of all superheroes in the comics in an attempt to create a “happy” little universe of all things evil. This epic problem is exactly the kind of thing that the 67 characters in Infinity War should be facing, and yes, there have been casting call rumors that they’re looking for someone who can play the part.

It’s logical that The Magus might steal the Soul Gem away from Vision, as the incredibly powerful bling can absorb souls and trap beings inside the pocket dimension of the Soul World. What could be more evil than that?

Thanos’ estranged daughter did appear in Guardians of the Galaxy, but we’re hoping she’ll make a comeback in Infinity War with a bigger role. In the comics, Thanos mercilessly turned her into a gross zombie-like thing – not dead but barely alive – as an offering to Death. This, of course, prompts her to hate him with a fiery passion. And when Thanos momentarily leaves his body in favor of an astral form to expand his consciousness across the whole galaxy, Nebula grabs the opportunity to take the Gauntlet for herself. She then successfully restores her health and undoes all the damage Thanos caused in the universe. Of course, she does this only because she wants to rule the galaxy herself, but still. Way to defeat her father.

Whenever Thanos is involved, we just can’t leave out the unlikely apple of his eye. Lady Death has always rebuffed Thanos’ affections, but that doesn’t stop him from doing everything he can to win her heart, including wiping out half of the universe. Ah, the crazy things we do for love, eh?

So while Thanos is waving around the Infinity Gauntlet looking all cool and undefeatable, we know he’s got a soft spot for this special lady; if she doesn’t appear in Infinity War, then what could Thanos’ weakness possibly be? Death would not only add a level of depth to Thanos’ character, but it would also give Thanos a clear motivation for doing his dastardly deeds. Plus, we’re all suckers for love stories, even if that romance happens to be between the physical embodiment of ultimate decrepitude and a purple guy with a penchant for sitting around in floating space-chairs.

If you didn’t see this one coming, shame! Darryl Jacobson may sound like a nobody, but thanks to the Marvel Studios panel at the San Diego Comic-Con, he is now the envy of anyone who’s ever wished they could share a flat with the Odinson. Their hilarious mockumentary gave us all a sneak peek at what the God of Thunder was up to and why he wasn’t around during the events of Captain America: Civil War: as it turns out, he was chillin’ in Australia with his new main man and roommate, the one and only Darryl Jacobson.

While the comedic clip focused a lot on Thor’s “ordinary life” (hanging out on couches with short shorts on and tucking Mjolnir in drawers included), it might actually be hinting at bigger things to come in the MCU. Taika Waititi even stated that “I think you probably could see him again. There may be other little pieces of that thing that everyone saw that may just be a small part of a bigger thing.”

So could “ordinary dude” Darryl be a clever disguise for something else? The possibilities are endless, which is precisely why we oughta’ see more of him in Infinity War. Is there anyone else you’d like to see in the epic film? Let us know what you think in the comments below!