Home COMICS 10 Horror-Themed Comics You Should Read This Halloween 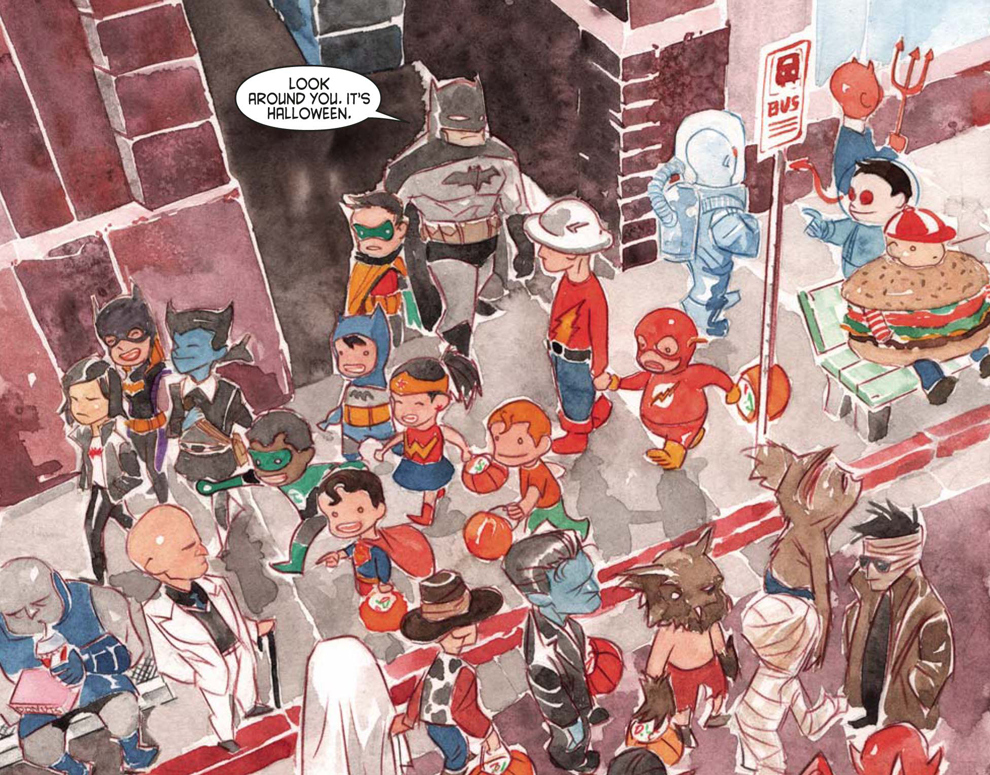 So it’s probably already a given that the Marvel Zombies series would be on the list, much like The Walking Dead should be. Plenty of comics and graphic novels out there can give you a bone-chilling and spine-tingling read, but few manage to stay with you even after the last panel. It doesn’t have to be exceptionally scary or horrific, nor does it have to be the stuff that nightmares are made of. It just happens to be what it should be—a darn good story. Here are some of the best horror-themed comics you should read this Halloween.

Kind of a no-brainer, this masterpiece by Jeph Loeb and Tim Sale is the first thing you should get your hands on this Halloween season. In fact, if you haven’t read it yet, you’ve already missed half of your life—seriously. As one of the most definitive Batman stories ever, The Long Halloween has our favorite Caped Crusader squaring off against a mysterious serial killer named Holiday, who murders people on, well, holidays.

Readers are reintroduced to the who’s who of Batman’s rogues gallery, including Two-Face, Scarecrow, Mad Hatter, Riddler, Poison Ivy, Calendar Man, and the Joker to name a few. The comic was also one of the influences that gave birth to Christopher Nolan’s epic Batman trilogy of films, so yes, did we not just say you should go out and pick up this comic book right now?

The insane popularity of The Long Halloween was actually prompted by the release of Loeb and Sale’s one-shot specials titled Batman: Legends of the Dark Knight Halloween Specials. The three stories include Barbara Gordon indulging Mad Hatter’s perverted tea party and a very Christmas Carol-y version of Batman’s “ghosts”, so yes, you should go and read these, too.

Being the fifth collection in the series, A Game of You features characters from the pages of the second collection, The Doll’s House. What happens next is Barbie’s mad adventures in her twisted fantasy world, including a powerful quartz amulet, an animated head, a witch, and a malevolent villain named the Cuckoo. Fantasy and Gothic horror have never been more awesome than in Neil Gaiman’s Sandman series, and in this particular collection, we get to follow a story which just might be Gaiman’s own favorite.

This one is legitimately terrifying, and is probably the most disturbing one in this list. Grant Morrison and Dave McKean have both done outstanding jobs in not only making the tale too horrifying to forget, but also in vividly painting a picture of what a nightmare it is inside the home for the criminally insane. The comic book actually feels like a Sandman read at times, and as the inspiration for the acclaimed video game trilogy of the same name, Arkham Asylum should definitely be on your must-read list if you’re planning on a spook-fest this Halloween.

Superman may not be the first character to pop in your mind when you think of Halloween, with his bright colors and the sun shining in Metropolis all the time. But much like in the Superman Annual For the Man Who Has Everything, even the Man of Steel has dark moments, and the most terrifying stories are the ones that hit right where it hurts the most. Targeting the deep psyche of Superman, Batman, Lex Luthor, and even the Joker, Scarecrow conjures uniquely heart-wrenching nightmares for each one.

Superman’s worst fear is that he’s unable to save his dearest loved ones who are all together in an airplane that crashes, and Batman’s is that he actually has a normal life. The poor Dark Knight’s life is already a living nightmare as it is, so living in a dream world where his parents are alive but knowing that it is all a dream is what tortures him the most. Darn it. Right in the feels.

Okay, just because it deserves to be mentioned, I’m adding this little tidbit of a strip here. Sure, you’re probably thinking that Garfield is Garfield, and there can’t possibly be anything terrifying about a lazy cat who’s happily on the heavy side. But in 1989, the Garfield: Alone series went all metaphysical and showed readers how Garfield struggles with his greatest fear: being alone. The final panel then goes on to say that the mind’s imagination is a powerful tool that can terrify us and make us question our whole existence. What. The. F. Can we all just go back to the “I Hate Mondays” thing, please?

As Marvel Zombies pointed out, the only thing worse than zombies is zombies with super-powers! Blackest Night was DC’s answer to that, giving us a whole lot of dead heroes and villains revived as undead Black Lanterns! Sure, there’s a lot of build-up for it in the Green Lantern titles and a ton of tie-in issues, but they’re all worth it! Seeing the DC Universe face an invasion of the dead is awesome on its own, and the tie-ins are actually just as good too, showing us how everyone is affected! If you’re not intimidated by the long reading list, give it a try!

Ever wonder what it’d be like if zombies and Cthulhu attacked the Transformers, G.I. Joe, and TMNT? I know, sounds crazy, right? Well, that’s exactly what IDW’s Infestation series gave us! As weird as this big crossover event seems, it’s actually pretty cool! Seeing some of our favorite characters from pop culture take on all these creepy creatures is pretty entertaining and it’s fun to see all the properties involved in the event. Ghostbusters, Star Trek, and even 30 Days of Night are in on the action, too! It’s a big crossover perfect for fans of any of these properties who want to see something …spookier!

Freddy vs. Jason sure was cool, wasn’t it? How could it get any better? How about if Ash from the Evil Dead franchise joined in??! It’s an all-out brawl between the three in Freddy vs. Jason vs. Ash, and it’s a delightfully terrifying blend leading to significant amounts of bloodshed! The icing on the cake is seeing Freddy Krueger become more powerful with the help of the Necronomicon, and all the crazy things he throws at both Ash and Jason! It’s a monster-mash in all the best ways, combining the evil-slaying awesomeness of Ash Williams and pitting it against two of horror’s most iconic slashers! If you’re a fan of any of these movies, then you’ll definitely want to check this one out. Hail to the king, baby!

9. The New Teen Titans: The Terror of Trigon

Here’s a Titans classic that’s bone-chillingly perfect for Halloween! If you thought this one would be like that arc from the 2003 cartoon then you’re partly right, but there’s so much more to this. The comic is full of horrific imagery and demons that couldn’t be on a show aimed at kids. It really fills you with this sense of doom of when Trigon reshapes the world into his own image.

On top of being creepy, it cements this story in Teen Titans lore with its masterful story by Marv Wolfman and fantastic art by George Perez. There were many attempts to recreate this story arc, but if you ask me, you can’t beat the original. If you haven’t read it yet, this season might be a good chance to try.

Wow, there sure are a lot of stories that have zombies these days. So, ever wonder how everyone’s favorite “merc with a mouth” would do in an undead-filled abyss? In this miniseries, Deadpool finds himself as the last Marvel “hero” on an Earth overrun with zombies. The issues have this nice use of coloring, making everything but Deadpool black and white, giving it a Walking Dead feel to it.

Does this list make you all hyped up for the holiday, or does it make you want to cower under the sheets and stay in bed forever? Let us know what your favorite Halloween comics are in the comments section below!