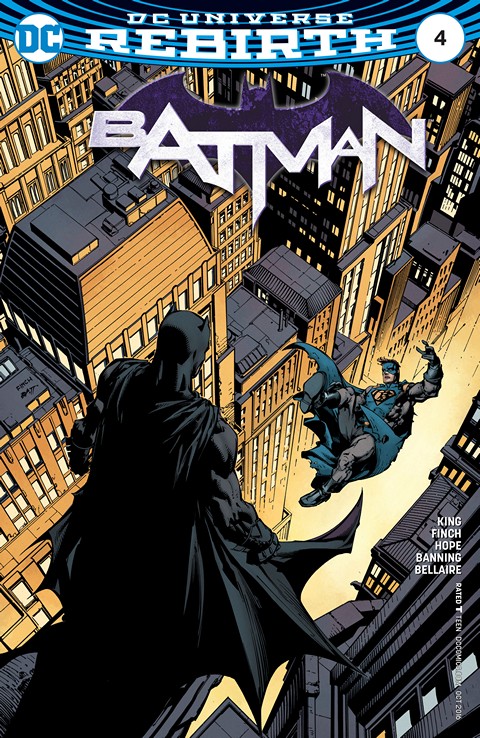 Check out Our Review [WITH SPOILERS] of Batman #4!

It’s always a dangerous game when a writer tries to add new characters to the mythos of a comic book legend like Batman. People paid the cover price to witness a Batman adventure, and if a writer focuses too much story real estate on a new creation, a story can easily become hijacked.

This issue focuses on the tragedy that shaped Gotham and Gotham Girl into the heroes they have become and also goes a long way to possibly transform the pair into Batman’s latest rogues. But unfortunately, the story space needed to establish the two new heroes/villains really takes away from Batman. In truth, issue #4 makes Batman feel like a bystander in his own title. King has a delicate juggling act to pull off and the writer doesn’t quite get there.

That’s exactly what happened in Batman #4. Writer Tom King did a rather good job introducing Gotham and Gotham Girl to the pages of Batman before this issue. It’s clear these two Gotham City newcomers are not throwaway characters, just the opposite; King is endeavoring to give both new players staying power. Sadly, this focus on Gotham and Gotham Girl has come at the expense of Batman- at least in issue #4.

The issue feels rushed and has some moments that are narratively unclear, and even the hyper-detailed art by fan favorite David Finch feels incomplete. There is a fragment of a good story here, but Batman, DC’s core title, is not hitting on all cylinders.

The highlight of this issue was definitely Batman’s meeting with Amanda Waller. The sequence is classic Waller and Batman, and it makes me wish that King would get a shot writing Suicide Squad. I feel this way because I have the utmost faith in King as a writer. His work on The Vision for Marvel is currently the best mainstream comic book on the stands and his Sheriff of Babylon monthly from Vertigo is an underrated genre delight that rivals Showtime’s Homeland as far as real world military intensity goes. But on Batman, King has not yet hit the stride he is oh-so-capable of. Maybe a story that tightly focuses on the Dark Knight rather than the new playthings in the toy box will go a long way to get King to the lofty heights he is capable of going on Batman.