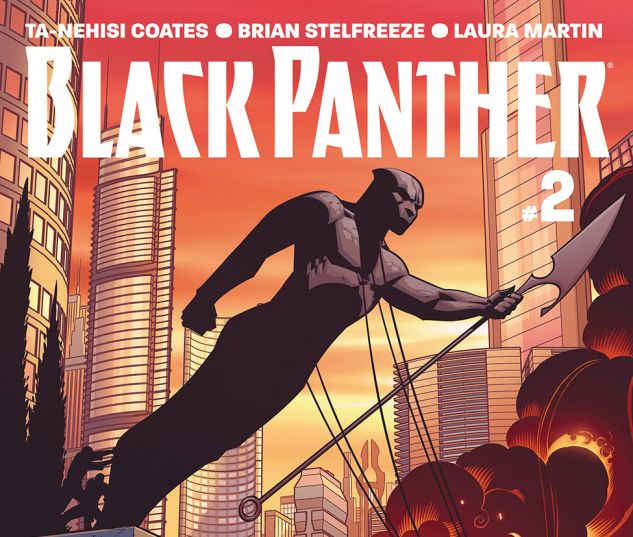 Check out Our Review [WITH SPOILERS] of Marvel’s Black Panther #2!

With the world buzzing about the cinematic debut of the Black Panther, Marvel, Ta-Nehisi Coates, and Brian Stelfreeze drop a bit of Wakandan awesomeness in our laps as the newest volume of Black Panther continues.

This book is a loving tribute to all the eras of “Panther” that came before. So many times, when a writer that works outside the insular comic book community comes to play in the Marvel (or DC) playground, that writer brings his own unique take on the character, and usually, for good or for ill, that character exists outside the connections of past continuities.

Coates’ Black Panther is a deft continuation of the work of Lee, Kirby, McGregor, Priest, and all the great writers and artists that have made T’Challa so great. In this second issue, we have the introduction of the Midnight Angels, two former members of the Dora Milaje that now act as vigilantes, keeping the women of Wakanda safe from roving bands of despotic criminals. This plotline is ripped from modern headlines as this struggle is basically the fictional Dora Milaje against the all too real evil of Boko Haram and the results are satisfying and fascinating. Coates also continues his civil war story arc (the Wakandan civil war, not the cinematic one) with Panther confronting the woman who has been causing Wakandan chaos.

The whole time, Coates meditates on statecraft, king-ship, the responsibility of leadership, and the global consequences of sovereign action. This is not a dry treatise into politics, it is a kickass superhero story with strong motifs and themes. It is also a pure Black Panther story, and believe me, the claws come out in this second issue. Coates knows his Panther lore. In this issue, he covers many Wakandan players including the late Killmonger, T’Challa’s fallen sister Shuri who exists between the lands of the living and dead, and the Panther himself, who, as always, has to balance running his kingdom with being a costumed protector of his land and people.

I was talking to the owner of my local comic store yesterday (Funny Business in Nyack, New York. ‘Sup Chris! Force Awakens ruled!), and he told me that new customers that have never even seen a comic store are walking in to check out the latest Ta-Nehisi Coates work. Marvel is doing an important thing with this book, a good thing. Marvel is bringing in new readers by allowing a very important contemporary voice to have a go at one of its icons. Most importantly, Coates is doing his great work without the expense of alienating Marvel’s faithful that has been supporting the character for years. He is delivering something new while paying homage to the old and it’s working. Man, is it working.

It doesn’t hurt that Stelfreeze was born to draw T’Challa. This is a very classy comic drawn by a man neck-deep in tribal symbology, and written by a man who is a master, portraying worlds both real and fictional to create a reading experience that is not only socially important but a great deal of fun as well.