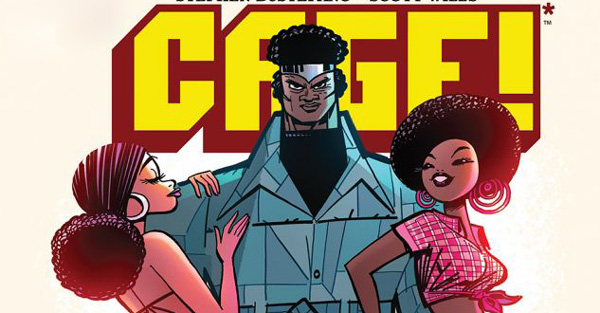 Last month, Luke Cage dropped in to see what condition his condition was in. In this month’s issue of CAGE!, our hero comes face-to-face with the man behind his current woes and it’s not AT ALL who you thought it was going to be.

Genndy Tartakovsky has a vision for Luke Cage. It’s a trippy, pop art, acid-fueled vision, but it’s a vision. You know what? I’m truly digging it.

THE PROFESSOR WILL SEE YOU NOW

Last month, Cage spent most of the issue tripping through a series of psychedelic splash pages. This month, his trip is over and he meets Professor Soos, the man (or he may be a mandrill) behind his current misadventure.

He’s not a doctor, he’s a professor, but he still speaks in rhyme like every character ever invented by the doctor whose name is a homonym. The rhyming dialog could have been a hindrance, but in Tartakovsky’s hands it makes what could have been a one-note character engaging, like the Grinch.

And why has Soos been so intent on capturing Luke Cage? I’m glad you asked. As you may remember, CAGE! is set in the swinging 1970s and Power Man isn’t the only hero in captivity. In fact, Soos has captured a menagerie of 70s genre heroes including Iron Fist, Dazzler, Brother Voodoo, Black Panther and Misty Knight.

And why has he captured all of these heroes? That’s easy. He’s brought them to his secret island sanctuary to take part in a…ahem…game of death against his animal lackeys.  Yes, it’s Enter the Dragon meets Island of Dr. Moureau rendered in rhyme.

None of these elements should work in a mainstream comic in 2017, but Sweet Christmas Tartakovsky makes them work.

Did I mention the Dolemite-inspired cover? A patchwork leisure suit-garbed Luke Cage surrounded by a trio of scantily clad ladies? So perfectly blaxploitation.

Issue 4 will, sadly, bring CAGE! to an end, so pick up the first three issues now and get ready for the big coup de grace!