Home COMICS Who Is Captain Marvel? The Basics That You Need to Know 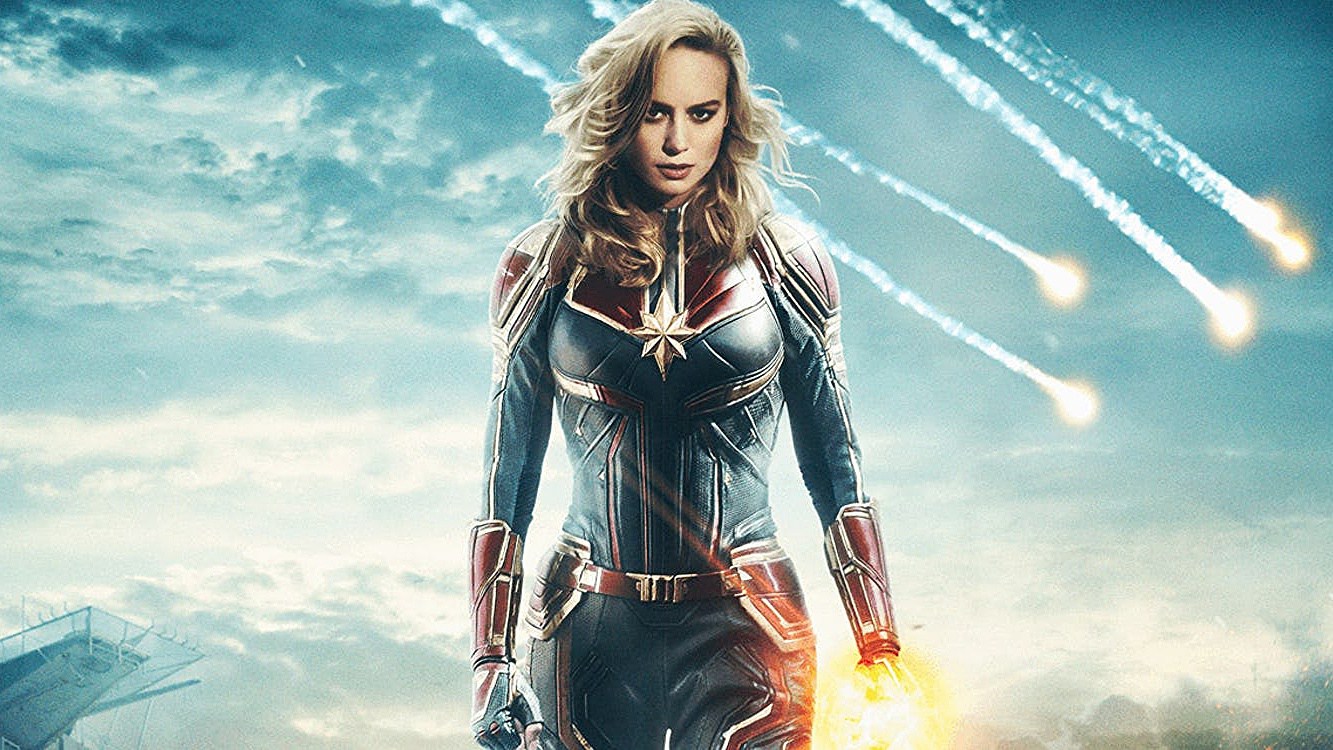 With Brie Larson playing the titular role in the 90s-set Captain Marvel in 2019 (and Avengers 4 maybe/hopefully/probably), here’s everything you need to know to brush up on the character before her movie comes out!

Plenty of heroes donned the mantle of Captain Marvel through the years, and if Marvel wanted to confuse us with all of these different incarnations, well, they succeeded. Created by Roy Thomas and Gene Colan in 1968, Carol Danvers was originally a member of the Air Force, and was also recruited by the CIA. She was even, at one point, a hard-headed employee under the equally hard-headed Daily Bugle editor-in-chief, J. Jonah Jameson.

However, during her stint as a NASA security director, she encountered the very first Captain Marvel—an alien named Mar-Vell. During an intense battle between Mar-Vell and his enemy Yon-Rogg, Carol got hit by the radiation from the Kree device Psyche-Magnitron, causing her to absorb some of Mar-Vell’s physiology and turning her into a half-human, half-Kree superhero named Ms. Marvel.

With her newfound super-strength, speed, and flight, Ms. Marvel began to fight crime as a strong role model of female empowerment all over the Marvel comic book universe.

Of course, Carol went on plenty of adventures as Ms. Marvel first before taking on the name Captain Marvel in honor of the Kree alien who gave her her abilities in the first place.

One such misadventure was when Rogue, learning of Carol’s supposed involvement in her future that will endanger her, attacked Ms. Marvel to prevent this so-called future event from happening. Due to the mutant’s ability to absorb the powers of whomever she touches, Rogue inevitably absorbed Carol’s powers AND her memories too. This resulted in Rogue sometimes getting plagued by Ms. Marvel’s persona inside her head, and Carol getting stripped of all her superpowers and her identity. 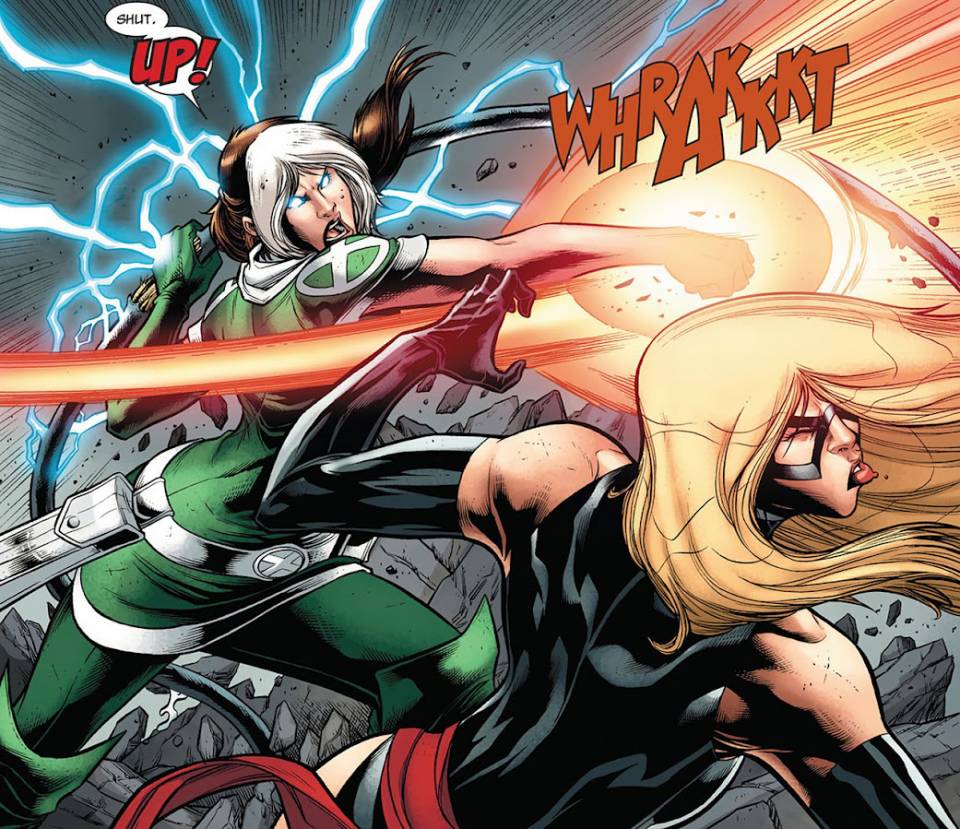 Charles Xavier attempted to restore her memories, but the traumatic incident rendered her detached from her own memories. Eventually, Carol was abducted by the alien life forms called the Brood, who experimented on her (she just can’t catch a break) for her intriguing half-Kree genetic makeup.

Something good, at the very least, came out of the whole experimentation thing, as Carol gained immense powers after the ordeal, giving her extraordinary abilities and cosmic energy that rivaled that of a binary star system. She then decided to become the superhero Binary and went on a variety of save-the-world quests until she was stripped of her powers (again!). Afterward, her original powers remained—and she went through a costume change to honor the memory of Mar-Vell. She ultimately took the Kree’s name too, and finally became the Captain Marvel we know today.

Just like any big superhero, a career can’t be complete without any controversy. In Avengers #200, Captain Marvel somehow ends up pregnant with a child whom she magically gives birth to in a span of just a few days. The child creepily grows at an accelerated rate, and, to the shock and horror of every single fan, it turns out that the child is Marcus, the child-version “son” of Time Lord Immortus. Immortus apparently brainwashed and impregnated Captain Marvel so that he could be reincarnated. The now-adult Marcus-slash-Immortus then woos her and whisks her away to Limbo—essentially forcing her to be her own son’s lover (eww, eww, eww). Why anyone would want to propagate that kind of storyline in a feminist icon is just beyond me. 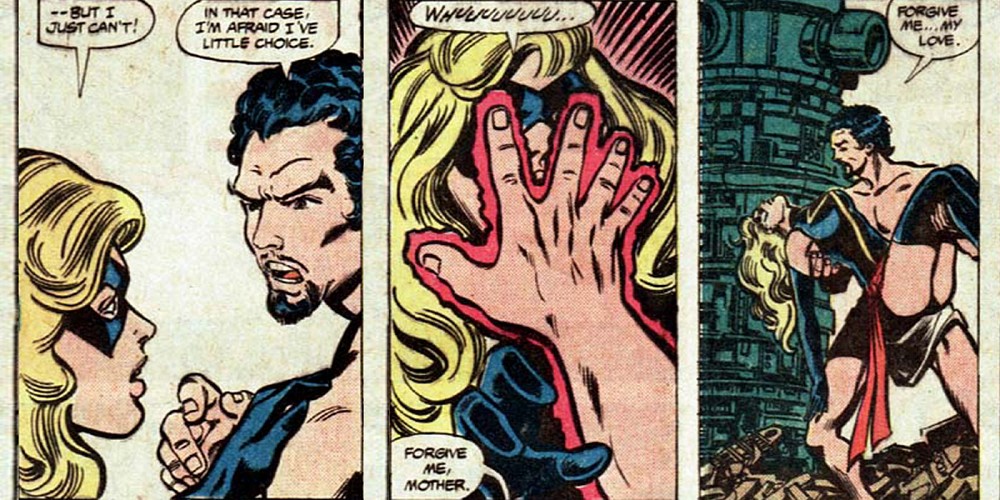