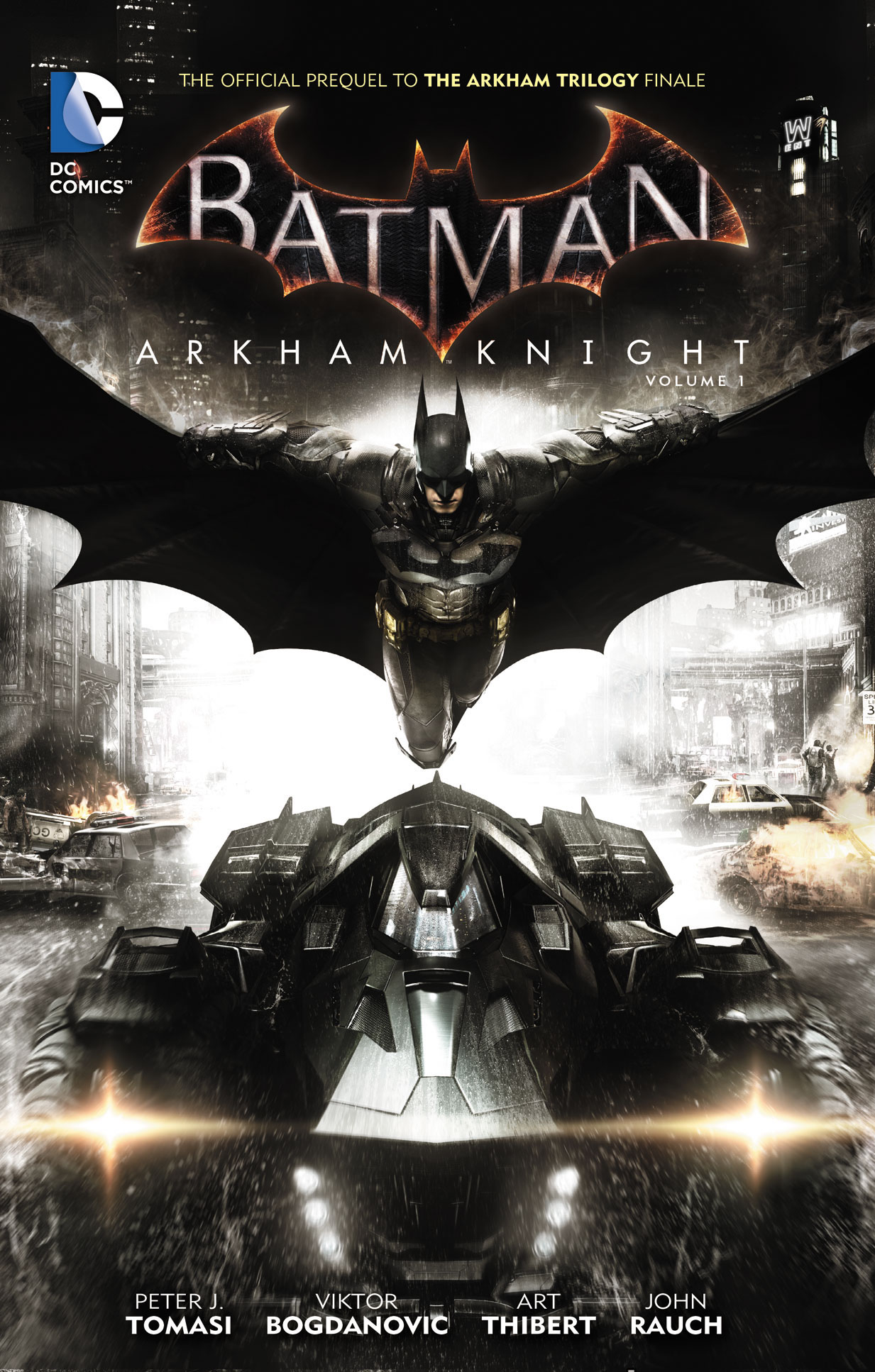 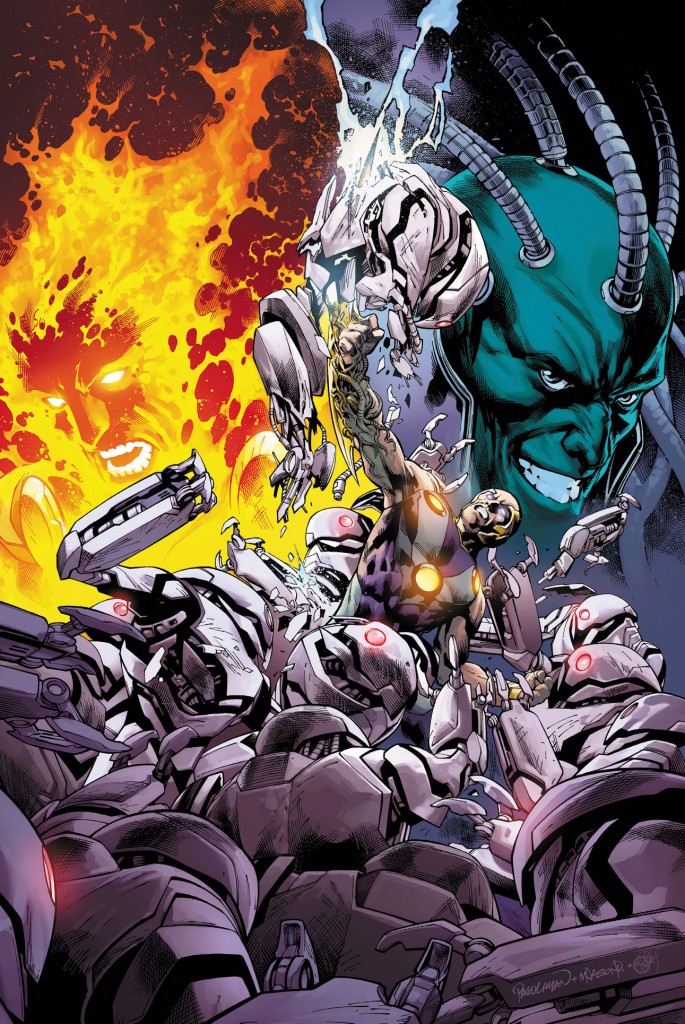 Trapped deep underground on the planet Colu, Telos has the data he came for, and he’s ready to fight his way out. But his revolutionary teammates—Techne, K’Rot, Stealth, and Captain Comet—have other ideas. They have a larger agenda: to liberate Colu’s population by destroying the omnipotent dictator, Computo, but does their plan include betrayal? 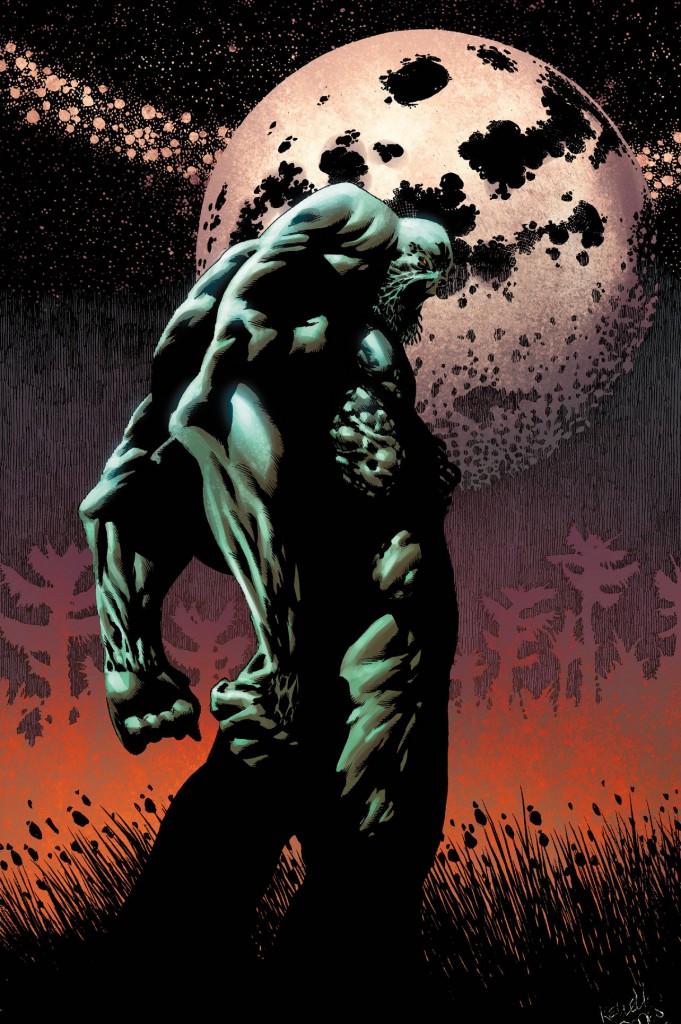 Swamp Thing returns in an all-new series written by his co-creator, legendary writer Len Wein! Swamp Thing has received an ominous warning, and now he finds himself under attack from the forces of dark magic. These are more than just your average monsters—and there’s something much worse looming on the horizon for Alec Holland! 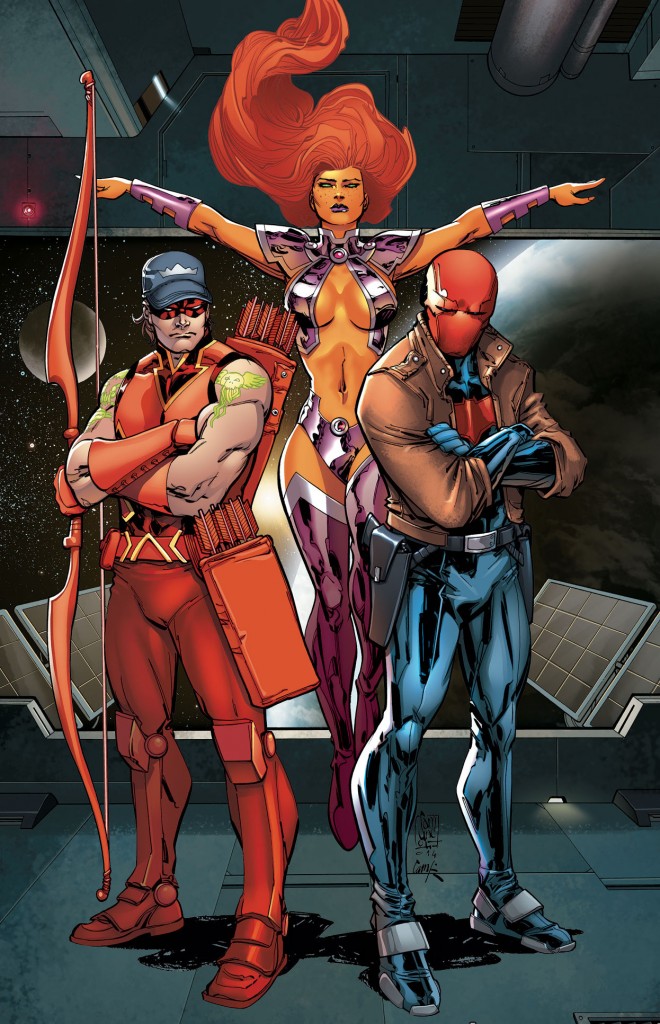 After discovering who kidnapped Starfire, Red Hood turns to the only thing he knows can overcome them: Venom, the drug that made Bane a super-powered killer! Collects issues #35-40, plus RED HOOD AND THE OUTLAWS: FUTURES END #1 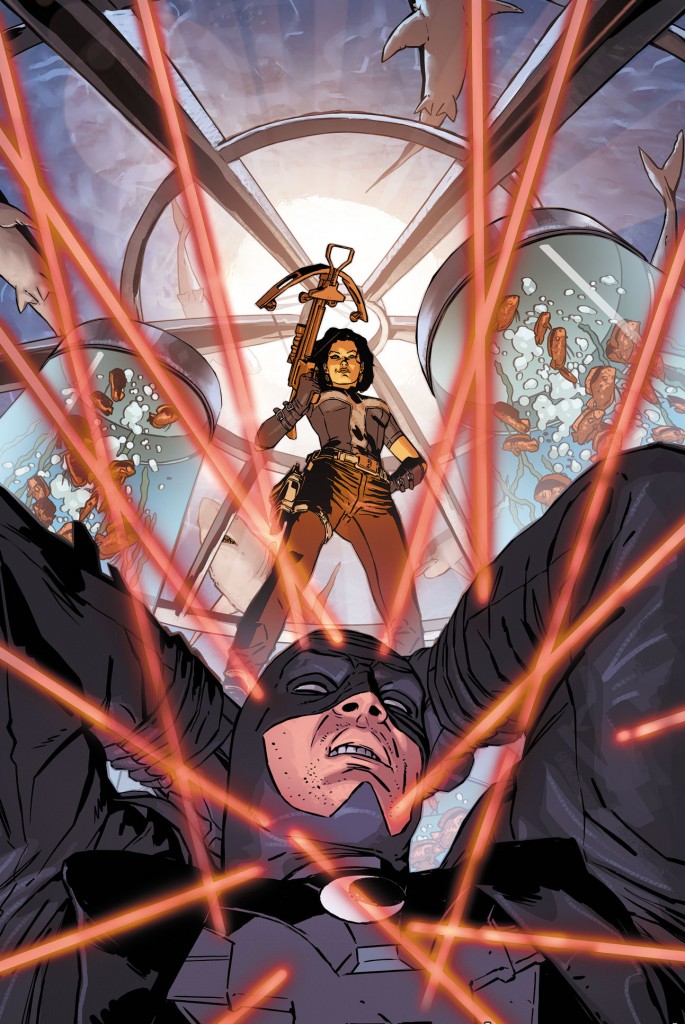 As he recovers from an assault that hit him harder than he ever could have imagined, Midnighter finds himself back in the sights of Spyral…but this time, they want him on their side! 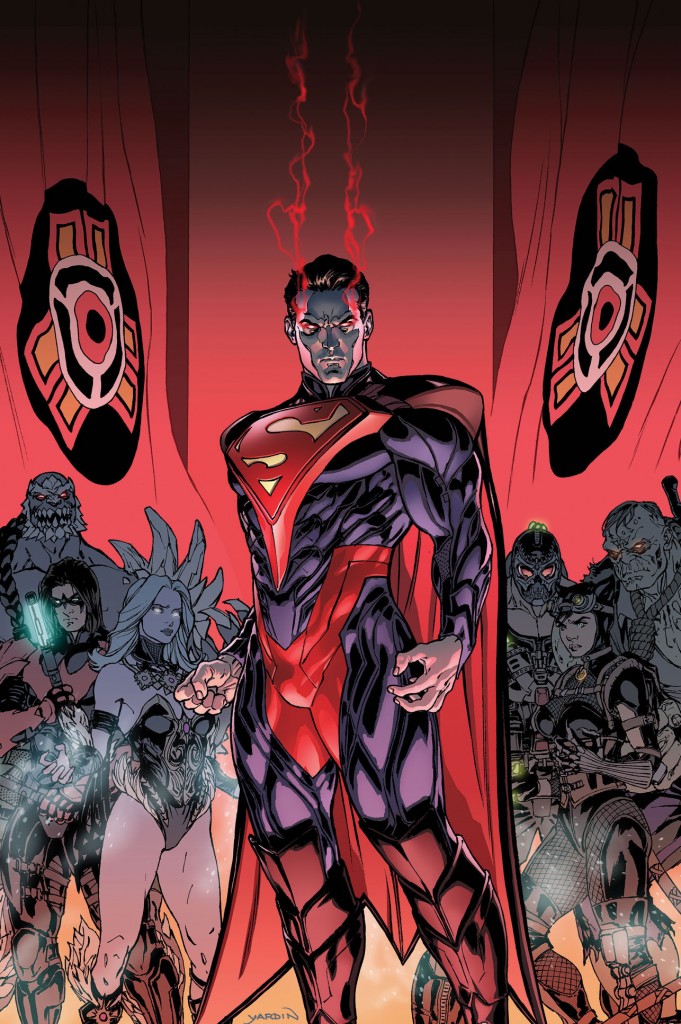 INJUSTICE: GODS AMONG US YEAR FIVE #1

This is it: the final year of INJUSTICE: GODS AMONG US, leading into the storyline of the hit videogame! Having defeated the Green Lantern Corps, the forces of magic, and now the gods themselves, the Regime seems to have eliminated all threats. Yet uneasy lies the crown on the head of Emperor Superman. Still obsessed with the outlaw Batman and worried about having enough troops to police his world, The Man of Steel begins to recruit some of Earth’s deadliest villains to his side. Does the Dark Knight have any chance of ending the Man of Steel’s rule? Digital copy to be released first. 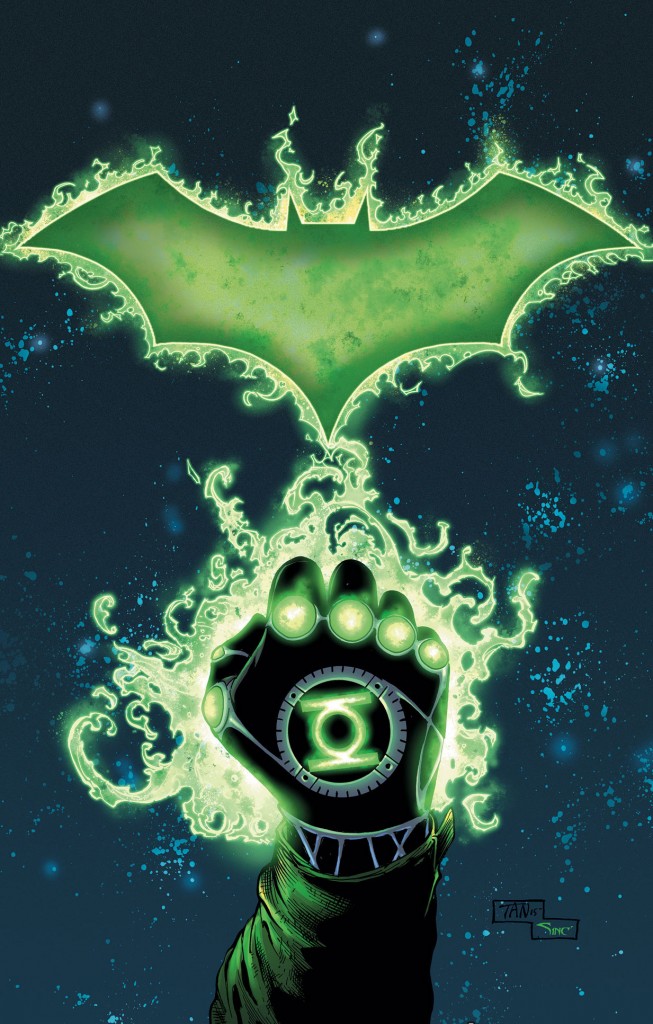 Back on Earth once more, Hal Jordan must bring in help to handle a terrorist attack on Coast City. But when Batman arrives on the scene, Green Lantern learns that much has changed while he was off-planet… 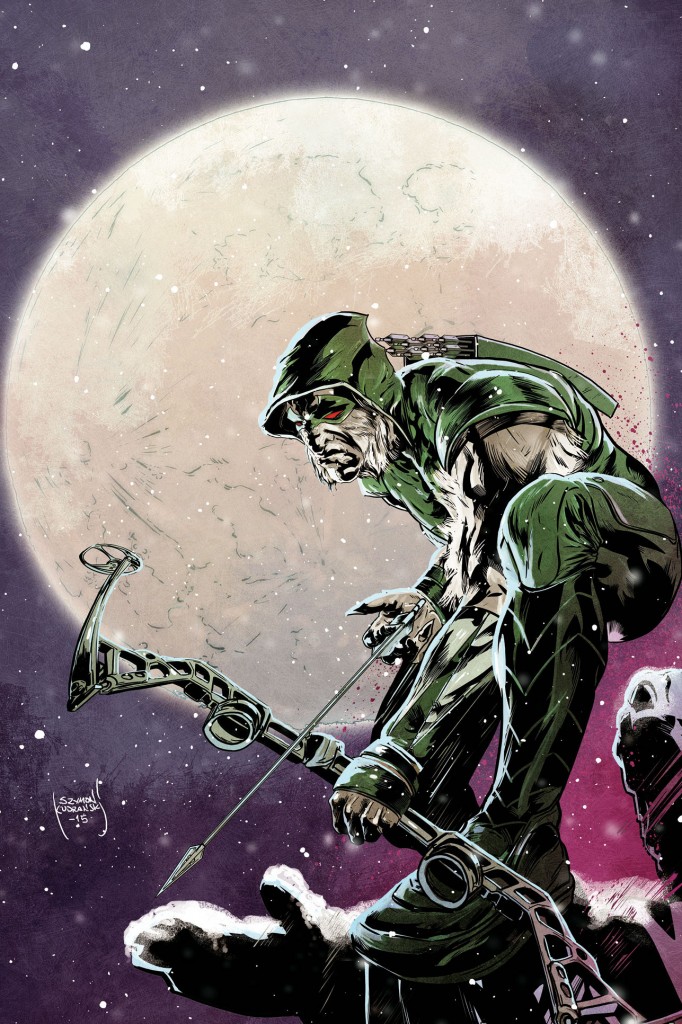 As a result of the traumatic effects of the recent ANNUAL #1, Oliver Queen has contracted the Lukos virus! As he struggles to find a cure, he must stay far away from his friends and family—or else he’ll tear them to shreds! 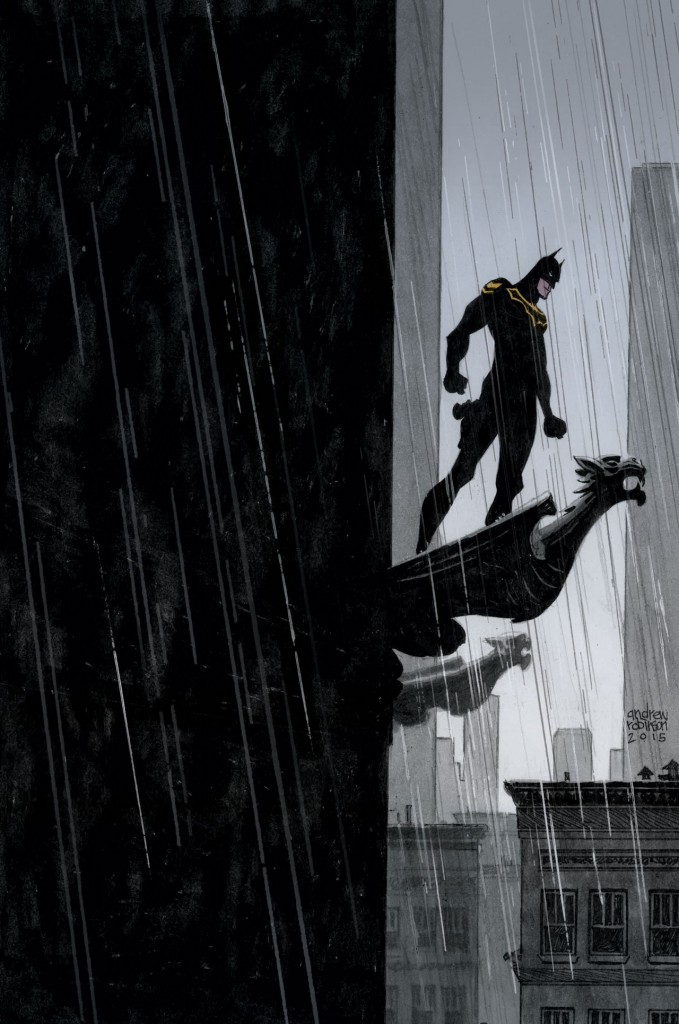 In the wake of the Robin War and globe-hopping with the Justice League, Jim Gordon is looking forward to getting back to what he, and Batman, do best: taking out crime in Gotham City. But lurking in the shadows at home is a case from Jim’s past that may decide the future of Batman. 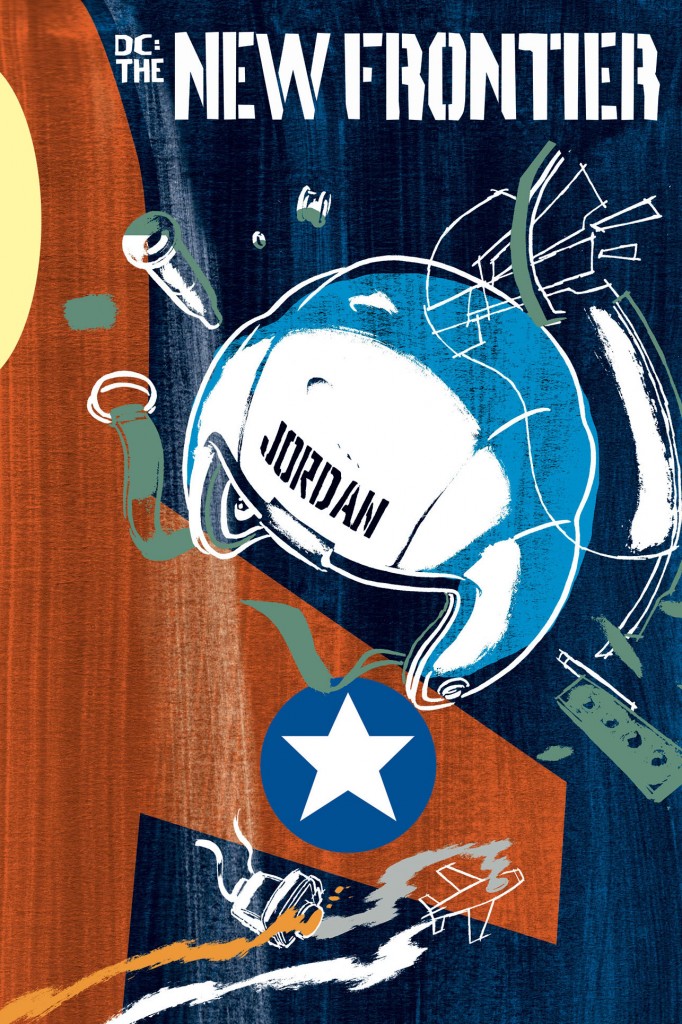 World War II is over. The Cold War has begun. And the Age of the Super-hero is in decline. But where are the heroes of tomorrow? This is the opening chapter of DC: THE NEW FRONTIER, reprinted at just $1.00 with pages from the DC ESSENTIALS CATALOGUE! 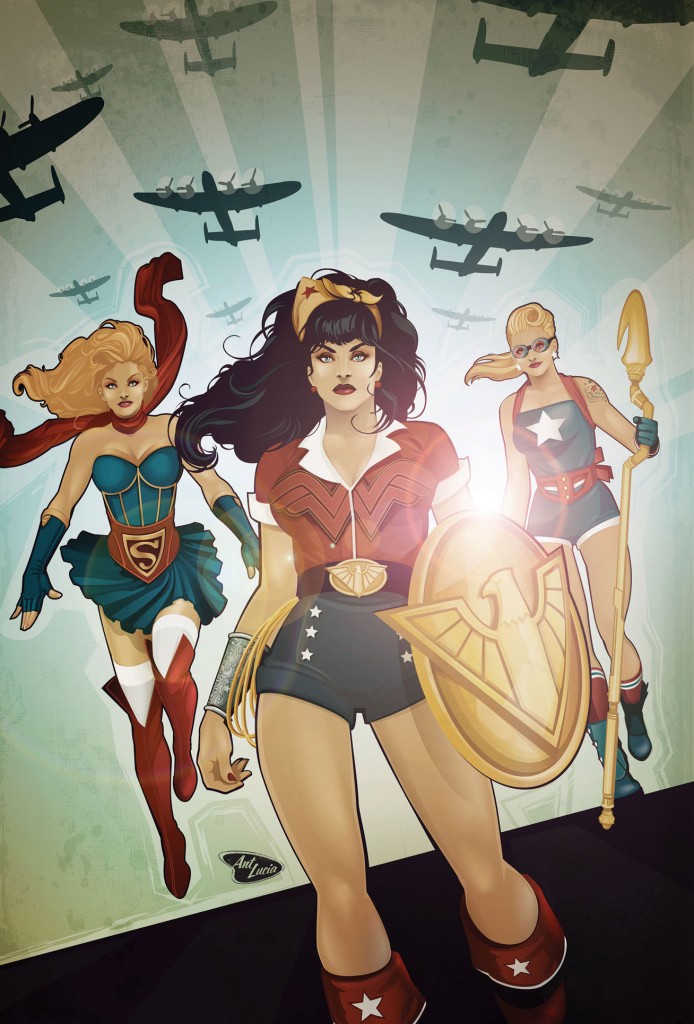 Now serving on the side of the Allies as part of the Amanda Waller’s Bombshells program, Supergirl and Stargirl wonder if they still are being used as instruments of propaganda. Meanwhile, mythological creatures and the undead legions of Tenebrus attack the Allied forces, bringing Wonder Woman into the fray. Can she count on the newest Bombshells to help? 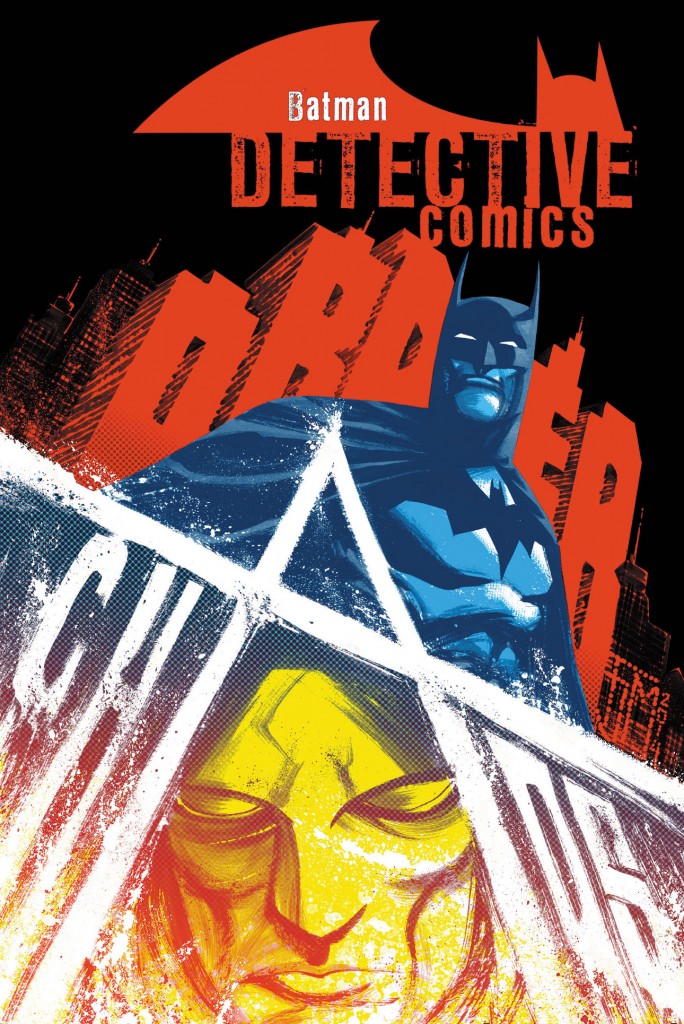 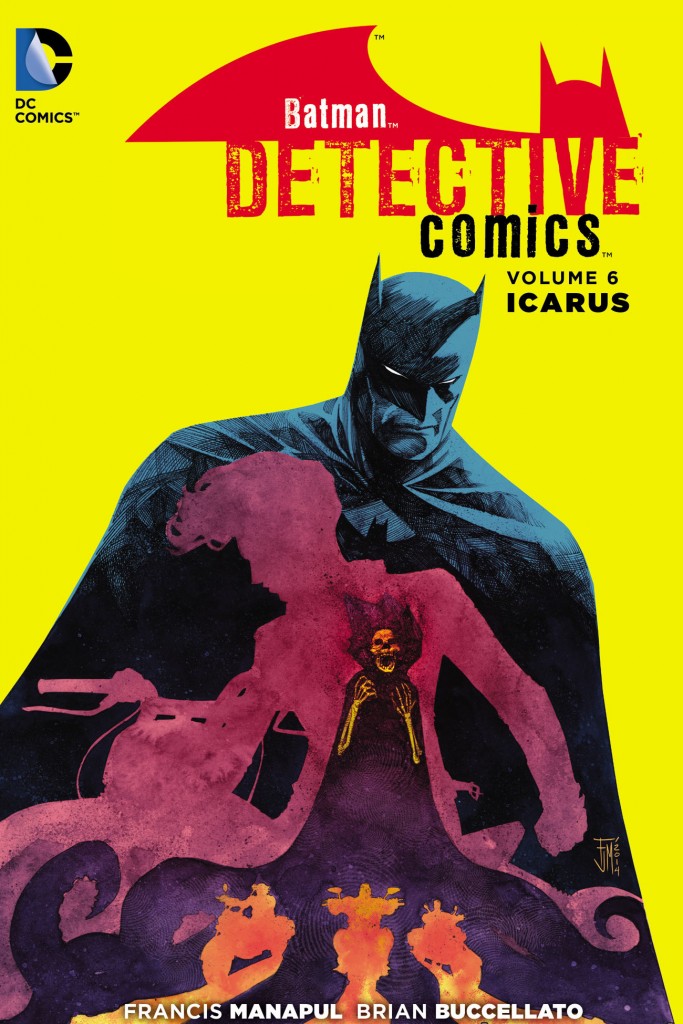 Batman finds himself knee-deep in a new mystery involving a deadly new narcotic in Gotham City. Can the Dark Knight stop the threat before the entire town finds itself embroiled in a deadly gang war? Collects issues #30-34 and DETECTIVE COMICS ANNUAL #3. 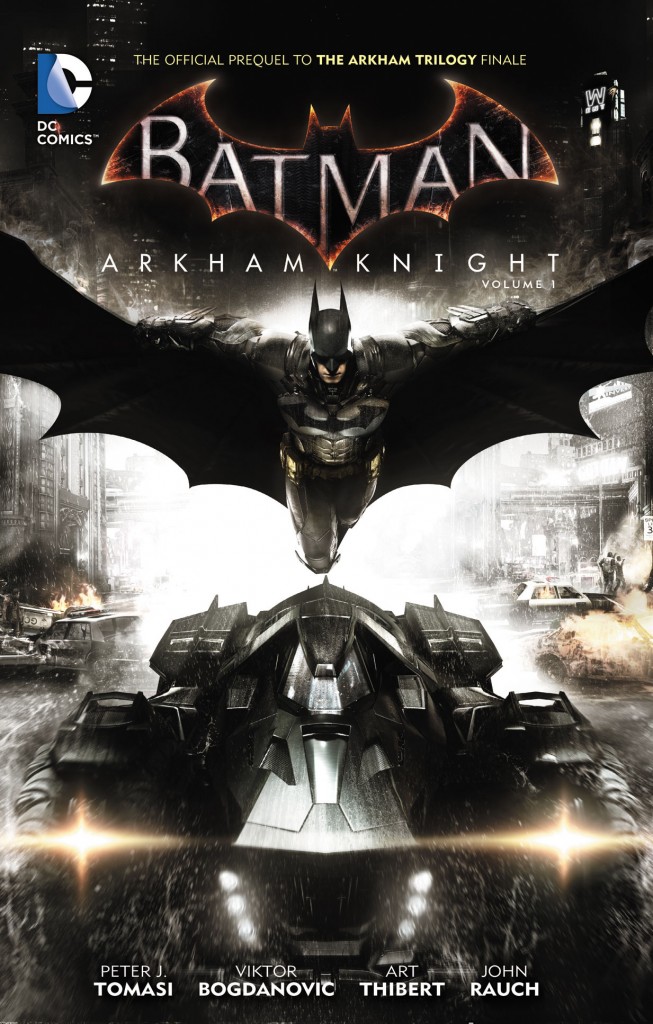 Collecting the first four issues of the new series! The Joker is dead. Arkham City is closed. As a new day begins, Bruce Wayne finds himself in devastating pain, recovering from his injuries and questioning whether his role as Batman is still necessary to the city’s survival. But can even death keep The Joker from tormenting the Dark Knight? 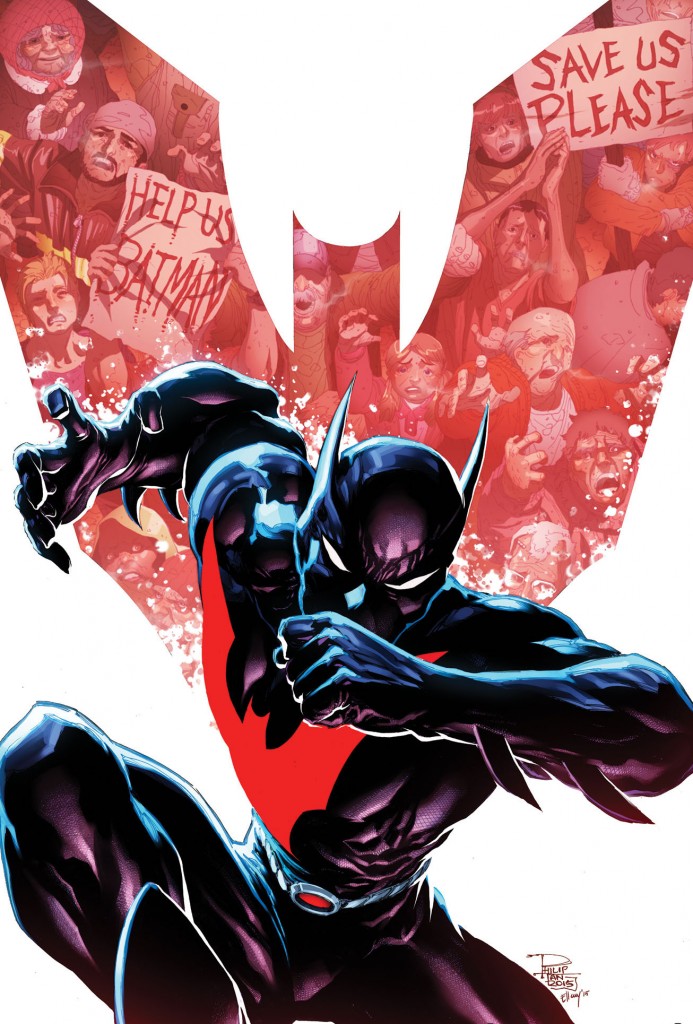 No good deed goes unpunished! Freeing the world from Brother Eye was only the beginning—with Neo-Gotham now standing as the only stable society in the known world, thousands of refugees have fled their war-torn cities to come knocking at the gates. But when the mayor of Neo-Gotham claims his city can’t support the whole world, the fate of these people will rest on Batman’s shoulders. 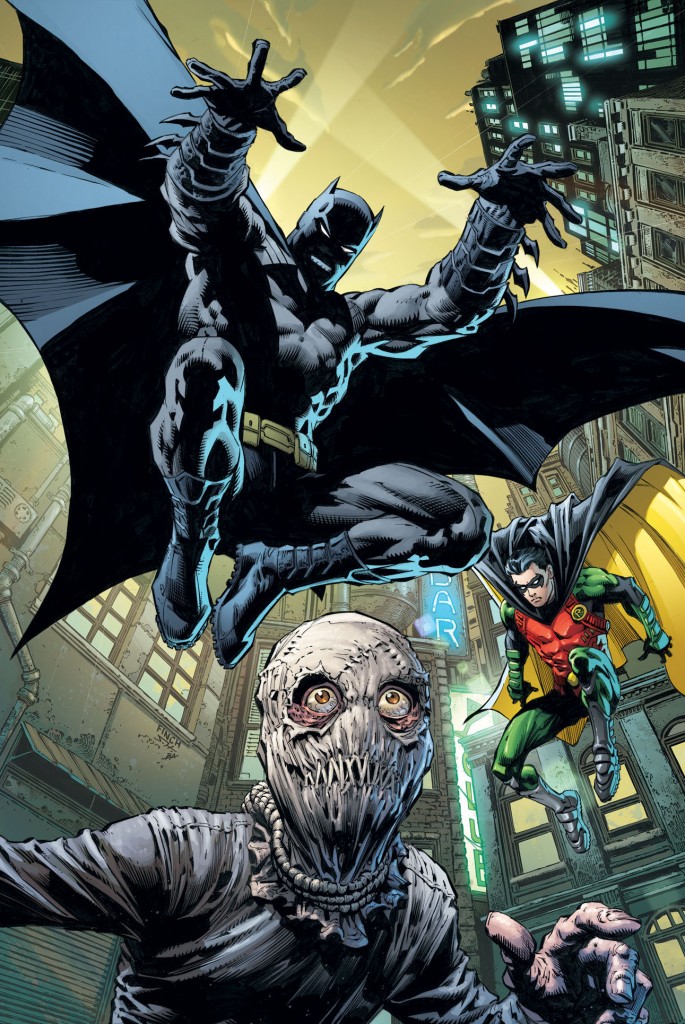 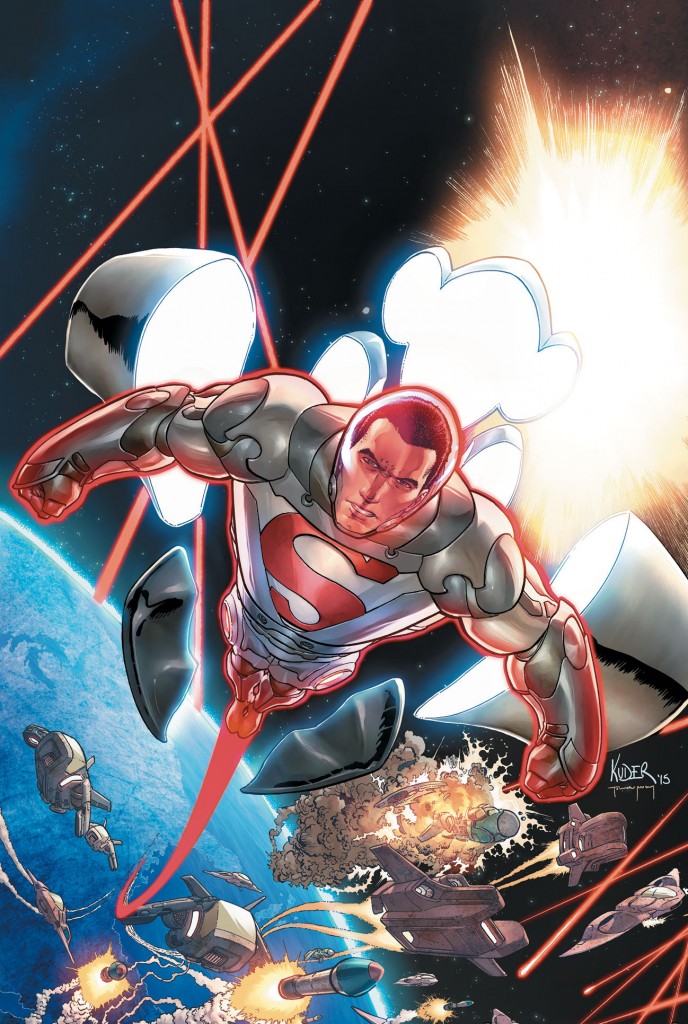 “The Savage Dawn” begins! Following recent events in the SUPERMAN ANNUAL, Superman is becoming increasingly desperate to regain his powers! The situation is dire, as he must rescue his fellow Justice Leaguers and save the lives of the soldiers facing Vandal Savage!