Home MOVIES Batman and Superman Square off over New Cereal 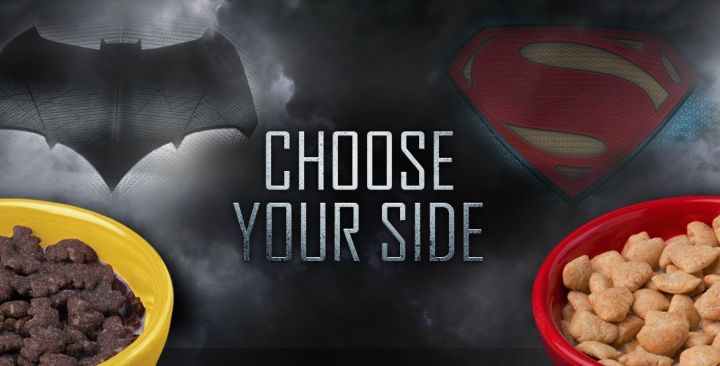 What is the best way to resolve the titanic struggle between the Bat of Gotham and the Last Son of Krypton? A two hour long epic movie between them? A comic book written by Frank Miller? A video game by the same dudes who made Mortal Kombat? Nah! The best way is of course the way we did it back in the day…through breakfast cereals! Cereal and Saturday morning cartoons…that’s how the real king was established. Unfortunately, I don’t know how many of us still watch Saturday morning cartoons but we can at least vote during breakfast through the magical process of cereal! I was never quite certain of the mechanism in which that worked, but hey, if Mr. T can get a cereal for several years I don’t see why not. Or a pink Frankenstein for that matter.

Alan Cunningham, senior marketing manager of Cereal Innovation at General Mills (that’s quite the impressive title) said, “Superman and Batman continue to appeal to the generations of fans that have enjoyed them for decades, as well as new Super Hero fans experiencing them for the first time. So it doesn’t get much more exciting for us than having the opportunity to feature these iconic characters on their two new cereals.” So what kind of flavors can we expect from the Caped Crusader and the Man of Steel? Apparently, Batman will be a chocolate strawberry while Superman will be a caramel crunch. I get the Superman thing but the words ‘Batman’ and ‘strawberry’ seem very strange in the same statement. That is unless we are describing the hue of a bruise or something! Either way, look forward to DC invading your breakfast and late night munchies sometime soon!