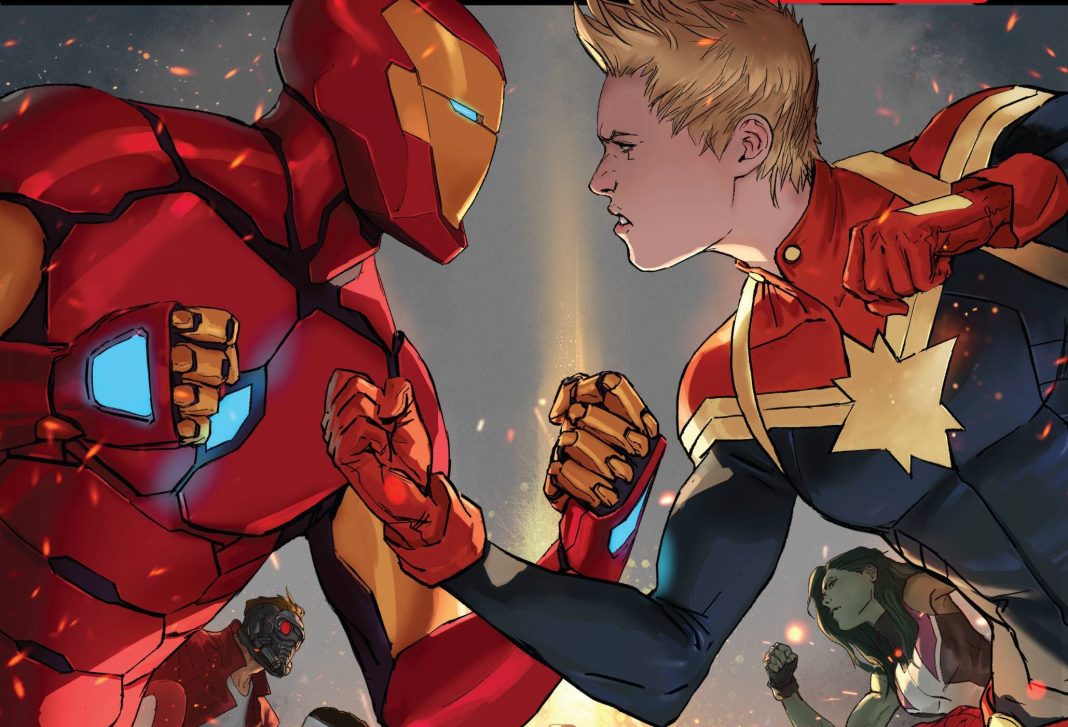 Check out Our Review [WITH only a few SPOILERS] for Marvel’s Civil War II #1!

Marvel’s second Civil War begins in earnest in a loaded but focused tale that moves at a breakneck pace while still allowing the major (and some minor) players to truly shine.

The core conceit of this second Civil War centers around a newly created Inhuman named Ulysses who has the power to predict the future. Thanks to Ulysses, the heroes of the Marvel Universe are able to thwart a Celestial incursion and save the day. But when Ulysses’ powers predicts a coming attack by Thanos, two Marvel heroes pay the ultimate price, kicking off an impassioned war of ideologies between Captain Marvel and Iron Man.

It’s a bit off-putting seeing major cosmic menaces like the Celestials and Thanos being used simply to advance the plot; characters like that should BE the plot, but, the main event here is the interactions between Marvel’s major heroes. At times, Bendis takes heat because people claim all his characters speak in the same voice. This is not true as Bendis is working with tons of characters in this issue, and they all have a distinct point of view and voice. Bendis’ Tony Stark is particularly compelling as is Carol Danvers and her failed earnestness. When tragedy strikes, the loss is keenly felt as the stakes of this issue quickly escalate into a morass of recrimination and confrontation. It’s hard to watch the heroes clash and that’s a good thing.

Bendis creates clear sides in his war of ideologies, with Tony Stark versus Carol Danvers over the issue of using Ulysses’ precognitive abilities to end threats before they occur. This brings up ideas of contemporary issues of privacy and power, and how that power should be wielded. Danvers acts rashly to counter Thanos and costs the heroes some major casualties.

This issue is sure to piss some people off, but it’s well-handed, masterfully paced, and thematically sound. And yes, folks, Steve Rogers is involved as a wonderfully placed wild card that gives everything an extra sense of intensity. There’s a great deal of fun stuff with some of the characters that are secondary to the story but important to the overall tapestry of the Marvel Universe. Like for real, there’s even some laugh-out-loud moments with Hellstorm of all people.

Oft times, these superhero jams become visually incomprehensible, but David Marquez kills it with appealing panels that give each character his or her own body language.

Again, this is a crossover sure to rankle fandom (but what doesn’t these days), but it is clear of purpose and thematically powerful enough to have me intrigued.