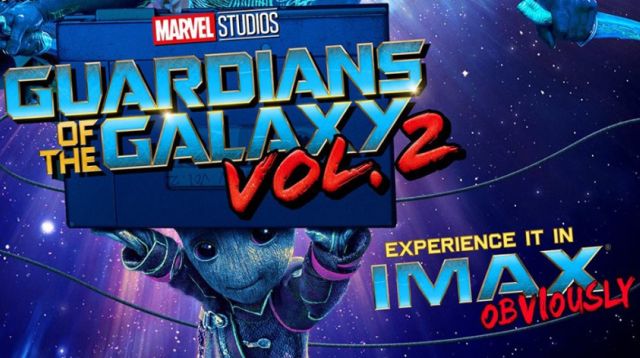 Share on Facebook
Tweet on Twitter
The following is a conversation between Source content writers Teddy Byrne and Keith O’Neil after seeing Guardians of the Galaxy Volume 2.
Keith: So, Guardians of the Galaxy Volume 2 hit theaters over a week ago. I’ve been looking forward to it all year, but I didn’t want to make my expectations too high.
Teddy: It’s the definite kickoff to the summer movie explosion. But coming from the shadow of the first movie and with the lineage of The Marvel Cinematic Universe, it was hard to not get hyped over it. I was all smiles before the Marvel logo even made it to the screen. I saw it in 2D.
Keith: I saw it in IMAX 3D. A movie like this was made for IMAX. I thought the 3D effects were good. As for the movie, I liked it, but I didn’t LOVE it. Part of me knew that I’d never have a cinematic experience like I did that first time I saw GOTG. So, I went in expecting it to be not as good as the first one. I thought the acting by everyone was great. Pom Klementieff (Mantis) was a great addition to the cast. Kurt Russell (Ego) knocked it out of the park like he always does.
My personal favorite scene was the trap Rocket set for the Ravagers. The comedic timing and the whole setting did it for me. LOVED the use of “Southern Nights” by Glenn Campbell.

Teddy: I was fine with that scene… up until the Ravagers started flying above the trees like it was a Looney Tunes cartoon. But that’s nitpicking for what was a great movie.

My favorite part was when the Sovereign chased The Guardians through the Asteroid field and we cut back to the Sovereign flying their drones like they were in an arcade. Then, the last guy standing failed and everyone around him blamed him for sucking. It was clever, funny, and awesome all rolled into one. Gunn continuing to go back to the Sovereign drone contingency was my favorite running gag from the movie.
Keith: Can’t tell you how many times that same scenario has happened in an arcade or playing XBox.
Teddy: For me, from the moment I heard “Brandy” by Looking Glass playing I knew I was going to be in for a great ride. I have a personal affinity for that song. Plus, seeing a young Kurt Russell in the opening sequence proved that James Gunn was paying close attention to every detail. Perfect kick off to the movie. The fact that Brandy was a plot point throughout the entire movie was just an added bonus. Gunn’s perfect inclusion of music seems right out of the Quentin Tarantino playbook. Every song had its place and fit in perfectly with the overall feature.
Keith: Right. It’s almost like the songs are characters. And the Cohen Brothers playbook as well, especially with The Big Lebowski. I always tap along to “Lookin’ out My Back Door” when I hear it on an oldies station.
Teddy: Music aside, I enjoyed how this adventure was basically a one-off adventure. Sure, it followed events set forth from the first movie, but as an overall story it does nothing to build towards future Marvel movies (post-credits scenes aside). It was a simple story about Star-Lord and his father with the other characters playing their roles perfectly.
Keith: Right. One thing I liked was how it didn’t necessarily tie in to the other Marvel Studios movies. Like you said, it was its own story and stood on its own.
Teddy: Thankfully, no Infinity Stones were included, and the Thanos references were kept to a minimum. But there was Howard the Duck!!!
Keith: And Cosmo in the credits! My personal favorite character was Rocket. Bradley Cooper brought it!

Teddy: His character arc from snarky bounty hunter to a true friend was a nice touch. For me, Drax stole the show. Especially with his interactions with Mantis.

Keith: Those were great, too. Say what you want about The Rock, but “The Animal” Batista has some great comedic timing.
Teddy: It’s crazy that professional wrestlers are taking over Hollywood.
Keith: Yeah, with The Wall, John Cena looks like he is next.
Teddy: But Drax’s constant putdowns on Mantis and how she continued to take them as compliments were great. Plus, the call back to his sensitive nipples!
Keith: Oh yeah, those two had great chemistry. To me though, the one thing that didn’t work was the sudden bond between Rocket and Yondu. It came out of nowhere for me.
Teddy: Yeah. I like the way both of their personal journeys unfolded, but their bond was extremely forced. Still, Yondu’s final moments were some real tear-jerking moments. I mean… “He’s Marry Poppin’s, y’all!”
Keith: I thought there were just a few too many jokes. The first one had the perfect amount of jokes. This time, it seemed like they tried one-upping themselves.
But the forced jokes weren’t NEARLY as horrendous as the amount in Anchorman 2.
Teddy: In defense of the humor: I don’t think I laughed at a movie this much since Deadpool. I wasn’t expecting that much humor, but it all worked for me. Some didn’t land as much… but there was an 80% success rate on jokes. Which is better than most true comedies today. And if comedy wasn’t your thing, how about the movie delivering the best Stan Lee cameo to date proving the theory that he’s a member of The Watchers?!?!
Keith: Yeah, I mean, the jokes were funny, but it was just a little too much for my taste.
That cameo was great. Is he credited as Uatu?
Teddy: Nope. Apparently Fox owns that particular character so Lee is just some random Watcher. But it still counts!!!
I also believe Vol. 2 did a tremendous job at balancing its villains. Ayesha (Elizabeth Debicki) and Taserface (Chris Sullivan) were perfect as side-project foils while allowing for Ego’s plans to emerge, placing him in the finale as the film’s true villain. Normally, when movies introduce three baddies, the whole things goes to hell in a handbasket.
Keith: True. According to Batman law, they all have to work together to take down the hero. Not this time!
Teddy: The Sovereign mocking Taserface over his name proves that not all villains have to be on the same page.

Keith: This movie definitely turned the structure of a sequel on its head. How about those 5 mid and post-credits scenes?
Teddy: Take your pick on which one was your favorite. But finally introducing Adam Warlock was the “coup de grâce” for myself. I’ve been waiting for him since Thor: The Dark World and he’s finally been delivered.
Keith: My personal favorite was the bookend of Stan Lee’s cameo. If Stan was telling me a story, I’d never leave.
Teddy: Those credits were so eventful. I completely forgot the reuniting of the O.G. Guardians with Sylvester Stallone, Michael Rosenbaum… Ving “Freakin'” Rhames… and somehow, Miley Cyrus. That bunch of characters better be in future installments, or have their own spinoff.
Keith: I’d say keep them as supporting characters, possibly in GOTG Volume 3. Maybe they’d give Star-Lord and the rest the 4-1-1 on Adam Warlock?
Teddy: I support that idea 100%.
Keith: Or have them appear in Avengers: Infinity War and talk about past battles with Thanos.
Teddy: It’s amazing that we’ve gone this far into this discussion without even mentioning Star-Lord (Chris Pratt) or Gamora (Zoe Saldana). They’re probably the two main stars, yet due to supporting characters stealing the show, they get thrust into the background of discussions.
Keith: Zoe Saldana and Chris Pratt always give solid performances. I’ve yet to be disappointed by either of them. A side note: Dairy Queen’s appearance in the movie totally worked for me. I got an Awesome Mix Blizzard a few days after seeing it.
Teddy: I’d steer clear of Baskin Robbins when they find out DQ is stomping in their Marvel Cinematic Universe ice cream territory. And Pratt and Saldana are solid. To quote Bill Belichick, they “Did their job.” It’s just a shame that no matter how great their performances were, there was zero chance they were going to steal the show from Baby Groot.
Keith: Baby Groot could run for president and would win in a landslide victory.
Teddy: Teen Groot… not so much. Damn millennial sapling!

Keith: He’ll grow out of it.

Teddy: Tree jokes… gotta’ love them!
Keith: Let’s leave puns out of this. We need to branch out!
Teddy: This post is now getting “sappy”.