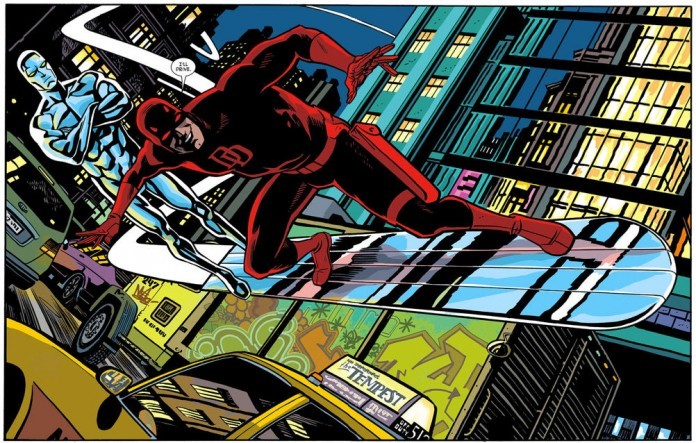 Each year, the coveted Harvey Awards celebrates (and awards) outstanding voices in the tumbling, churning (and seemingly overwhelming) seas of comic book creation; exquisite creators who achieve momentous highs in a medium bursting with brilliant minds and positively luminescent line work. Legendary writer Mark Waid is one such exquisite creator. Mr Waid’s writing on Daredevil, a truly masterful examination of the Man Without Fear, has very recently earned him this year’s Harvey Award for –that’s right, you guessed it– Best Writer. And to that, we here at The Source have only this to say (and/or sing in a belted chorus of absolute satisfaction): HELL YES!

Along with collaborators Chris Samnee (artist), Javier Rodriguez (artist), Matt Wilson (colorist) and Joe Caramagna (letterer), Waid’s Daredevil stood out as especially excellent among a host of already excellent runs; runs performed by top-notch creators who not only wrote/penciled amazing stories, but used Daredevil as a vehicle to transcend comic book paradigms stagnating in their morally simplistic tropes. Did Mark Waid’s Daredevil follow the trend? Yes, since trending successfully is dependent on rebuking the trend.

Mark Waid’s Daredevil was alive; he was whole; he was as personable and as palpable as any (relatively friendly) person you might meet. His charm was quaint, mysterious and assertive, and you drew this connection from the warm dialog, from the simple, expressive shapes and shadows discerning the character’s collected demeanor. And there was the struggle; the guarded emotion; the tightly tucked away grief sitting low in his chest. It was there, and we knew it; we knew there was turmoil and shadow and clamor and wreckage, because we saw it in his stance. We heard it in the slight trepidation that sometimes broke free from the warmth and charm and seemingly innocuous mystery. And we knew it then as Mark Waid had known it all along: Daredevil was broken, and the only way to keep his bloody shards of calamitous history from digging deeper was to force his perception outward and forward.

Congratulations, Mark Waid, and thank you.

What did you think about Waid’s tenure on Daredevil? Are you sorry to see him go? I ask that because, yes, I am EXTREMELY UNHAPPY ABOUT THIS. To properly cope, I’m starting a support group. Let’s get our first session started, shall we? Who wants to share first? And remember: On this island, we cast no judgement.