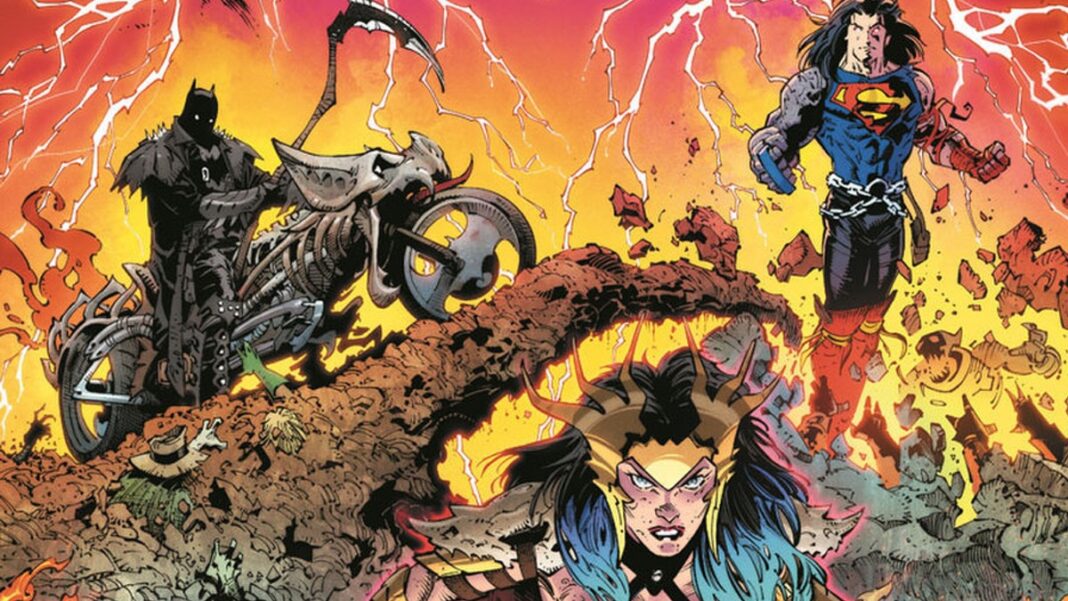 When DC Comics released its epic six-issue miniseries Dark Nights: Metal from 2017 to 2018, it definitely lived up to its name and even though its effect has rippled far and wide in the DC universe, as well as creating one of DC’s biggest ever threats, I was nonetheless a bit underwhelmed by particular elements of the story … until I re-read it. The different metals seemed excessive to me, and a bit boorish, but I did enjoy the world-building elements of the Justice League cracking the Source Wall as well as the creation of the Batman Who Laughs and introduction of Barbatos, who is a predecessor to the bigger reveal of an even bigger bad for the Justice League: Perpetua.

For those not in the know, Dark Nights: Death Metal #1 is not merely just a sequel to Metal, but directly picks up from writers Scott Snyder’s and James Tynion IV’s Justice League “Justice/Doom War” (issues 29 to 39). At the end of Justice League #39, the team of heroes pleads their heartfelt, honest case to the people of earth to choose goodness over Perpetua’s false promises of doom disguised as justice. They appeal to rely on the true system of justice, no matter how flawed and oftentimes disappointing it can be. One cannot read this story without thinking of a vaguely similar correlation to the results of the 2016 U.S. presidential election. One side represents a more traditional and, oftentimes, disappointed sense of justice and truth while not always getting the desired results, versus the other side which promises to be different, to rebel, to reach down and appeal to one’s most basic instincts while saying they’ll accomplish safety, law, order and justice, which is really just intolerance and vengeance disguised as these things. The people of earth appear, at first, to side with the Justice League as Perpetua is bound and suffering. But, unexpectedly, the doom symbol appears strong in the sky, leaving the JL dumbfounded as Batman mutters, “We lost the vote.”

It’s no coincidence Snyder and Tynion IV decided to go this route. Comics – like most contemporary art – often tend to reflect the times; it’s art imitating life. While most may not want to make the connection between this JL story arc and today’s real-life news, it’s there. Whether you agree or not on this real-life parallel, the writers have spun an amazing tale … and it continues in Death Metal. The main hope is that since Metal has expanded the DCU into new, different lands, with Death Metal, Snyder and Greg Capullo will expand greatly on the DC characters they bring into this story. The DCU has been separated into the Arkham Wastelands, Megapokolips, Castle Bat, and Themyscira, a paradise which is now Hell. Yes, Joker dragons and multiple evil mash-up versions of Batman are cool, but what I’m really hoping to see is what’s become of some of my favorite characters in this landscape: Catwoman, Lois Lane, Deathstroke, Darkseid, and Lex Luthor, among many others. It’s known that Snyder likes to bring in some of the lesser known characters and I’d love to see them make an appearance as well! Capullo’s art has always been a highlight of the Metal books and in Death Metal #1, he focuses more on Wonder Woman and the darker, transformed world, and the reader can tell he feels at home with the quality of art here. Of course, any great artist is not made great alone without a team of just-as-talented inkers and colorists to lift and highlight their art. In this respect, Death Metal is graced with the amazing talent of inker Jonathan Glapion and colorist FCO Plascencia, who also worked on Metal.

Snyder and Capullo have masterfully knitted together DC events from the last two years and even further back. The most notable mention is of five major crises: 1985/86’s Crisis on Infinite Earths, 1994’s Zero Hour, 2005/06’s Infinite Crisis, 2008’s Final Crisis, and 2017/18’s Dark Nights: Metal. Despite their best efforts in the “Justice/Doom War,” the heroes are now having to live in a world which has been turned over to darkness. Fan-favorite Wally West – fresh off his adventures in Flash Forward – reveals to Wonder Woman, who is now in charge of Hell, how these crises are contributing to powering the dark multiverse. In this debut issue, West further touches upon how Doctor Manhattan (from Watchmen and Doomsday Clock) tried to mend fractures in the multiverse caused by Perpetua and her army’s damage.

There are some intriguing questions resulting from appearances in this first issue alone. What is Sgt. Rock referencing and what happened to him to make him appear like he does at the end of the issue? What is Lobo searching for and who is his benefactor? Why is Jonah Hex so interested in the dark multiverse Batmen and zombies? Have we seen the last of the Batman Who Laughs? And was that Doctor Manhattan who the “groblins” are going to fetch near the end? Where is Superman!? With all of the mentions of the different metals throughout the multiverse, what will be the “death metal” and is it as ominous as its name portends? And, most importantly, since the Justice League title has since featured stories which have not seemed to address what happened at the end of issue #39, as Wonder Woman herself questions, what happened after the heroes stepped through that light? These are all questions introduced in this first issue and they are definitely sure to keep the reader glued to what promises to be an unforgettable, universe-changing event!