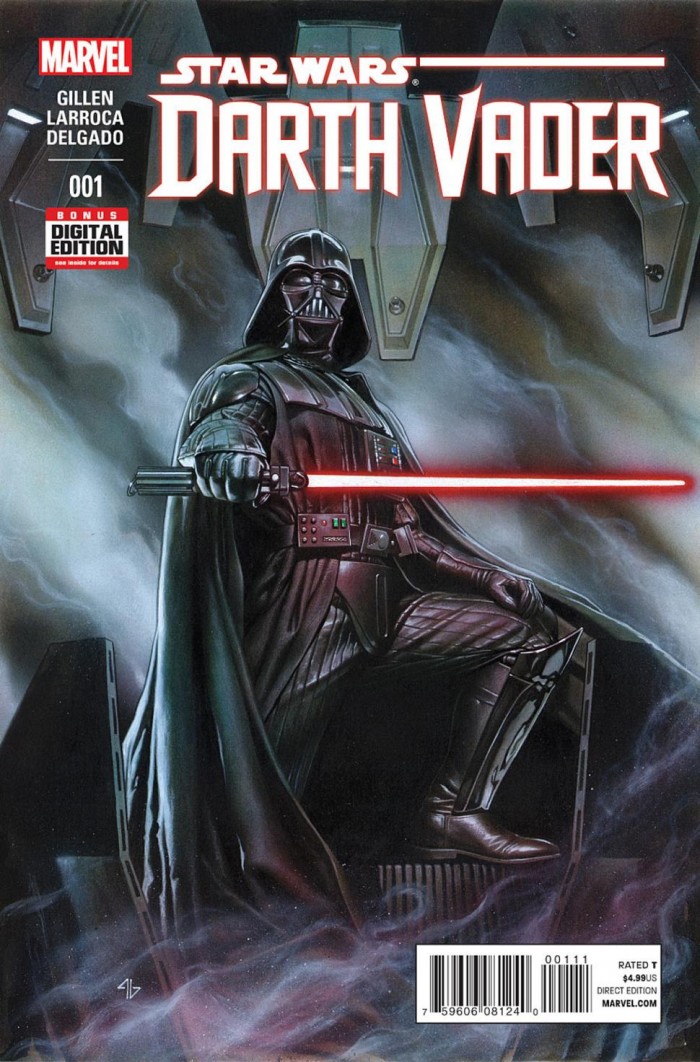 I figured it would be a good idea, and extremely fun, to fan the flames of my own anticipation for Star Wars: The Force Awakens by getting into a Star Wars comic. Darth Vader #1, written by Kieron Gillen, colored by Edgar Delgado and penciled by Salvador Larroca, is sure to make you feel the power of the Dark Side.

Kieron Gillen’s writing grants us Vader’s perspective within the Star Wars universe, a perspective where the Empire is actually…good (I wish). Taking place after the destruction of the Deathstar in Star Wars Episode IV: A New Hope, and before we see Hoth in Star Wars Episode V: The Empire Strikes Back, Darth Vader tries vigorously to find a way back into the Emperor’s good graces after his failure with the Death Star.

The pencil work in Darth Vader #1 is fairly standard and does not make an attempt to wow the reader. However, the color that Delgado incorporates into the scenes makes the dialogue pop up noticeably from the page. Details are enforced by both the pencil work and coloring, successfully drawing an effective contrast. Not necessarily the best work done by Larroca, but it does compliment the world of Gillen and Delgado. This series is probably the easiest to follow as far as the dialogue and storyline are concerned; Darth Vader #1 does a great job introducing readers to this particular storyline.

As soon as you open Darth Vader #1, the classic Star Wars scrolling credits describe Darth Vader’s current predicament. Immediately, you are plunged into Jabba the Hutt’s palace on Tatooine as Vader demands to speak with Jabba. Of course, Jabba’s guards attack Vader, who proceeds to make short work of them. In the process of demanding something from Jabba, we’re plunged into a flashback detailing an exchange between Vader and the Emperor. Throughout the flashback, we learn of a Rebel attack against Jabba’s envoy; an attack Vader and The Emperor deem important and worth investigating. The Emperor also makes it a point to express his displeasure with Darth Vader in the face of his recent failures.

This is when General Tagge appears once again. Do you remember Tagge? He was the general that Darth Vader choked because of his ‘ignorance’ on the Death Star. Anyway, Tagge is promoted to Admiral and Darth Vader must now answer to him.

Another flashback reveals that Vader’s real mission is to find Luke Skywalker. Darth returns to the fleet and continues his search, enlisting the services of everyone’s favorite, soft spoken Mandalorian, Boba Fett. Mr. Fett has been tasked with locating the whereabouts of the Millennium Falcon and, of course, a particular, fair-haired member of its crew.

Interested? Intrigued? Wondering what happens after Vader #1? Then be sure to read my forthcoming review of Darth Vader #2!