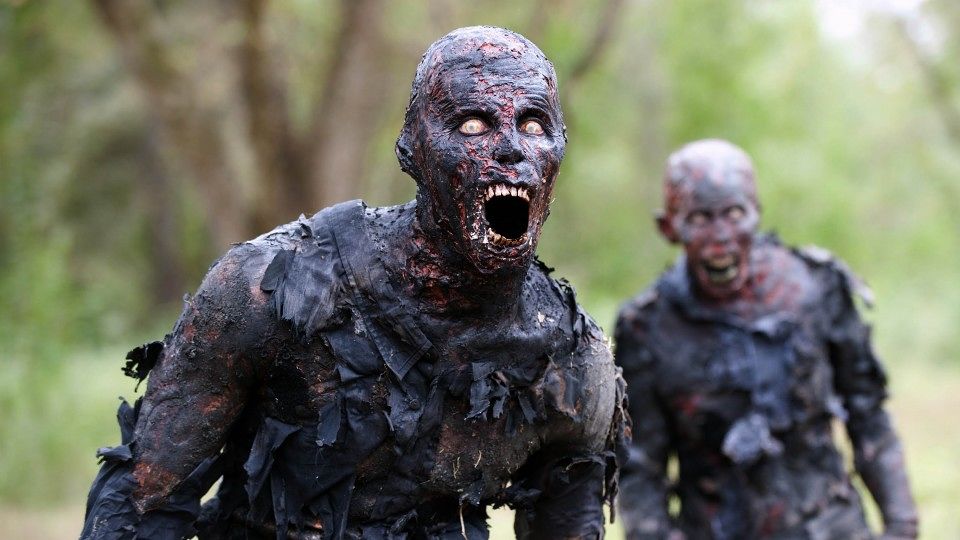 Well this episode certainly started off with a bang…and here I thought it was going to be a slow episode involving dialogue and a four mile long zombie mambo line. Hey, once one of those lines gets started it is hard to stop. Where was I? Oh yeah! The Walking Dead! Starting off with Sasha, Abraham, and Daryl as they continue to kite the hungry undead, they run into a town that may be a trap…or perhaps just a camp of other survivors? Either way, they opened up fire and came at them with cars. Well stocked, eh? We then had Daryl run off into an extra crispy set of woods with equally as crispy zombies. What gives, right? I guess somebody got the family bucket!

I have to admit, I rather like the washed out burnt forest where the people see to have all of the color and saturation. Was it a move on the director’s part? I’d like to think so. Unfortunately for Daryl, he was probably looking at the colors too and then BAM! Guess there was an ambush somewhere along the line. Are these new people friend or foe? They seem apprehensive about their certain predicament, that’s for sure. At least they sound like they had some fun with fire…and probably did what most of us. Who wouldn’t want to fight zombies right away, right? If anything, this new set of three seems to have mistaken Daryl for a bad person…which would make sense. He did make off with their bag!

They are really stepping it up with their zombie make up game, and in that moment of struggle with Daryl and the mossy zombie he comes across a moral quandary…it looks like the new people have somebody who is diabetic! Ouch. Talk about a rough deal during the zombie apocalypse. How would even one maintain their supply that far into the end of the world? Either way, Daryl was faced with a decision and even though we all know what Daryl was going to do, it was still fun to see him go through the process. This season has been significantly better than the previous one, don’t you think?

Wait, so what happened with that zombie-train? Did they somehow lose it during the shoot-out? Perhaps the undead got spooked by the sound of gunfire? At least it affords Abraham and Sasha some character development time with Abraham lamenting over his former military career. I am getting the impression that Sasha is turning into Carol 2.0. She’s becoming increasingly ruthless and calculating. She just wants to survive, but what for? Does she survive for the sake of survival? She has something to prove but I am not even sure if she knows what’s up. Loose ends makes one’s ass itch apparently. Guess we are just going to stick around and wait for Mr. Reedus!

Wow, these new-NEW people are going to be a real big problem. Nothing like a crazy dogma paramilitary unit to keep you on your toes. I think these guys might be Necromongers from Riddick. At least they know about amputation stopping the spread of the infection. These guys might be part of the upcoming big baddy crew, but I might be getting ahead of myself. At least the bad guys look for somebody for like…2 or 3 minutes and then get bit by a pinned zombie and give up. This is what evil hasn’t completely taken over the world yet, folks.

I guess Abraham was also pretty happy with his most recent find. You know, I’ve been really wondering what a rocket would look like delivered into the center of a rotting horde and chances are, we’ll get a chance to see it…and then Abraham can fire up a cigar afterward as he walks away from the explosion. What was up with the super intense screaming/staring contest? I think I almost went a little crazy from watching that! I was really hoping that his screaming would have caused the zombie’s head to pop or something like that, but that may have been a little bit too much. I probably shouldn’t have watched Akira before hand. It is nice that Abraham has such a cherry disposition, eh? Hopefully that doesn’t mean that the icy-hand of death is closing in on him…

Wait, what? Abraham making the moves on Sasha? I thought he was with that other girl? You know…the one Mr. Mullet was…um…watching? Yeah. Suddenly we are going to get some drama in with our zombies. I guess that’s a bit of a change. We haven’t really seen anything like that since the first season(that is with main characters). I’m not entirely sure how I feel about that decision, but we’ll see how that goes.

Ohhhh, that poor girl. They went through all that trouble to keep a diabetic alive and the…ugh. When will people learn in this world? At least Daryl has recruited the two survivors and that probably sets up for the coming show-off which I feel is just on the horizon. Wait, nevermind. Wrote that too soon. I guess we will be seeing that show-down a bit sooner than I expected. Nobody steals Daryl’s bike…nobody! So now we have a truck of gas, a fancy new suit for Abraham, and somebody asking for help. Fun fun!