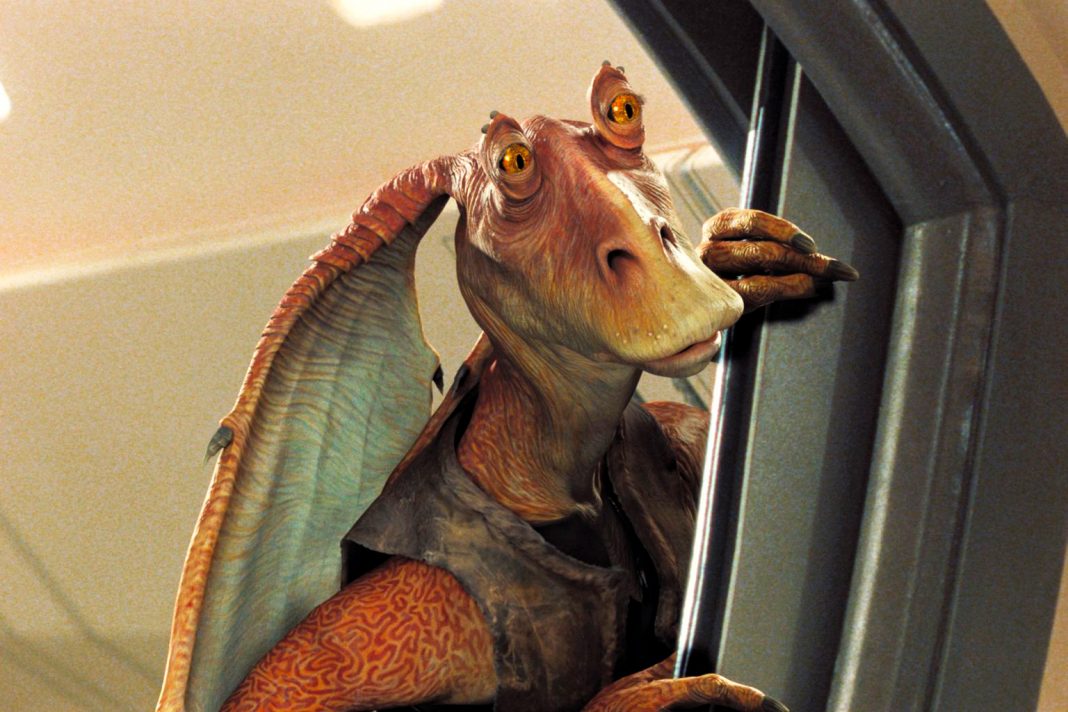 It’s a story as old as time; a hero saving someone who’s been captured by a villain. Over the years we’ve gotten hundreds of variations on this scenario, and certain characters given to recurring victimization have become icons in pop culture. Characters such as Lois Lane, who needed repeated rescuing, became an icon because, yes, she was pretty, but also because she was charismatic and fun. But then there’s the other side of this coin, the annoying ones who constantly throw themselves at danger. You can call them “Damsels in Distress,” or you can call them “Dead Weight!” Either way, these are eight comic book and Sci-Fi characters heroes should stop saving. Seriously, just let nature take its course.

She may be a founding member of the Avengers, but she seems to have a knack for getting into trouble. In Avengers: Earth’s Mightiest Heroes, Janet van Dyne is the assistant and partner of Hank Pym (Ant-Man/Giant-Man), and even helped the Avengers decide on a name for themselves. However, from the start, she found herself in need of rescuing. Honestly, she’s either captured and held hostage by villains, or easily removed from the theater of super-combat.

Her powers also do very little against a capable foe; she’s more of an annoyance than a threat. It looks like Hank may have skimped on her powers, since she doesn’t get the added “strength-factor” Hank receives from Pym Particles (what a jerk)! It’s sad, because it makes Wasp seem kind of useless by herself. She can be the heart and soul of the team on occasion, but it feels like Wasp gets captured every other day.

As one of the three human kids who discover the Autobots and Decepticons, Miko is along for the ride whether you want her there or not! Being a thrill seeker, Miko tends to jump headfirst into trouble, which almost gets her killed on a regular basis. If that wasn’t enough, she peer-pressures her friends into joining her on these outings and almost gets them killed, too! Also, she never stops to listen to anyone or learn from her mistakes.

Naturally, this makes Miko an object of repeated rescue. Sure, there are moments when she shines, and her friendship with Bulkhead can be touching at times, but her reckless behavior constantly causes problems for everyone around her. The Autobots seriously need to put a bell on her.

Green Arrow must be super-unlucky because he dealt with two varieties of annoying damsels in distress. On one hand you had the bitter-old-flame Laurel, and on the other…Felicity (she’s like Oracle except not as cool)! Which one’s worse, you ask? I don’t know, but you can certainly make a case for either.

With Laurel, you could say Oliver’s saved her more times than he’s flip-flopped on his “no killing rule.” Laurel either went looking for danger or it looked for her, but Green Arrow would always save her. You’d think she’d improve when after taking up the mantle of Black Canary…but nope! She actually got into more trouble, and took on threats she wasn’t prepared for and needed to be bailed out.

On top being the default bait for any Green Arrow trap, she could also be really unpleasant. There were a ton of moments in the series where she was really selfish and tried to be the center of attention. She also had something of a short-fuse, lashing out at almost everyone (whether they caused her suffering or not)!

Then there’s Felicity, who’s admittedly more essential to Team Arrow…buuuuut has also been kidnapped way too many times. She’s supposed to be the brains of the operation and yet it seems like every time she’s alone, she’s captured by the villain of the week.  She’s a genius so she could invent something to defend herself with, but she never does. At some point, Oliver’s gotta make a “save the idiot hostage for me” arrow; it’d be so helpful!

So, which one is worse? Well I think that’s up for you to decide. Laurel constantly threw herself into harm’s way at the drop of a hat. Her selfishness even got people hurt or killed. Sadly, the moment she finally became capable or interesting…she died!

Felicity should be smarter than this, but always seems to fall for the same tricks. It’s almost like she ignores her safetly so Oliver can save her! The way I see it, it’s two halves of the same whiny whole!!

Thundercats are on the move, Thundercats are loose…and then there’s this guy. As a servant of Lion-O, Snarf helped to raise and protect the young Lord of the Thundercats. Although I’m not sure about “protecting,” since Snarf’s a bit of a coward. He’s either hiding behind the Thundercats or getting himself into tough spots and needing to be rescued. This would be fine…if he wasn’t so irritating. Snarf never shuts up!!

When he’s not repeating his own name, he’s whining, complaining, or just screaming for help. You can really sum up the bulk of his dialogue as “Help, Snarf!” “Lion-O, save me!” “SNARF SNARF!!” Yeah, it gets on your nerves very quickly. Thankfully, when the 2011 reboot rolled in, they made sure Snarf never spoke a word, and that’s probably for the best.

[SPOILER WARNING FOR The Walking Dead comics and TV show!!]

In The Walking Dead comics, Andrea’s a hell of a shot and important member of Rick’s group. You can really see why she survived this long; she’s actually pretty awesome. However, the TV version of Andrea….is not. In the show, Andrea was a handful. On top of being suicidal (figuratively and literally), she was also a whiner who ignored people trying to help her. Because of this, the other survivors would constantly have to save this waste of space from being zombie food! And if you thought her skill with guns translated over to the show, you’d be wrong! She actually shot Daryl by accident!

If any of that wasn’t bad enough, she was also quite foolish. She made horrible judgment calls that got some of the others hurt or even killed. Her stupidity made her throw herself at Shane and the Governor, ignoring how horrible they both really were. She even had multiple chances to kill the Governor after finally realizing he might be a bad guy’ too bad she didn’t take any of them! That last part eventually did her in, though. The Governor made her a zombie’s snack, and then she killed herself before she could become a walker. Both these things happened off-screen, so I guess the showrunners wanted her gone as much as the audience did!

It was pretty depressing to see this character that’s so important and capable in the comics reduced to this! The TV version was so inept and self-centered, you can barely believe the two versions are supposed to be the same person! Andrea quickly became one the most hated characters on The Walking Dead and it’s pretty easy to see why.

You just can’t have a list of repeat hostages without mentioning Princess Peach! As the ruler of the Mushroom Kingdom, Peach usually gets kidnapped by Bowser and gets rescued by the heroic plumber, Mario. Considering how many times Peach has been captured over three decades, she really needs to boost her castle’s security. Unfortunately, it probably wouldn’t help much since Peach is gullible and easy to kidnap. She never assigns anyone to guard her and never puts in an effort to keep herself out of Bowser’s clutches.

What she does do is lean on Mario (and sometimes Luigi) to rescue her. When you really stop and think about it…this is a dumb rescue plan!! Let’s say Mario bites the dust on his way to Bowser’s castle. I mean….that’s it! You’re doomed because you never trained soldiers to defend you!! She may be the most famous damsel in distress in video game history, but at this point she should know better.

It was my sincerest hope that we’d never again have to talk about Jar Jar, yet here we are! Much like Snarf, Jar Jar is an annoying coward who needs constant saving. Unlike Snarf, Jar Jar gets himself into danger through his own clumsiness. He’ll fumble about and sometimes even makes a bad situation ten times worse. He’s actually so incompetent his own village  banished him (see, not even Jar Jar’s people like Jar Jar)!

His clumsy and cowardly behavior makes him dead weight, and more trouble than he’s worth. He’s made a name for himself as the most annoying character of Star Wars canon, and his actions led to the rise of the oppressive Galactic Empire. Though it’s a lot cooler if you go by that “Darth Jar Jar” theory!

1. Any Citizen of the Marvel Universe (Marvel Comics)!!

It’s hard being a superhero. You put on your costume, go out and risk your life to protect people, and how do they repay you? By treating you like you’re the bad guy! That’s basically what happens when you save an innocent bystander in the Marvel Universe. Sure, in some cases it makes sense; it would never be easy for anyone to accept the Hulk. However, they seem to treat most Marvel heroes with disrespect.

It’s almost like they don’t want to be rescued. And when they do, they’re really fickle about who’s saving the day. Guys like Thor or the Fantastic Four are praised, while Spider-man or the X-Men are despised. It really makes you wonder how these people’s standards work. “Oh, we’ll gladly be saved by that guy who can light himself on fire, but that spider guy’s a menace! “That demigod who can summon lightning bolts is fine, but I’ll shun anyone born with laser eyes or bone claws!”

With cities under attack on a regular basis, they really shouldn’t be picky with their superheroes.

Did I leave anyone out? Which annoying characters need to be left to their own devices or well-deserved fates? Let me know below!!