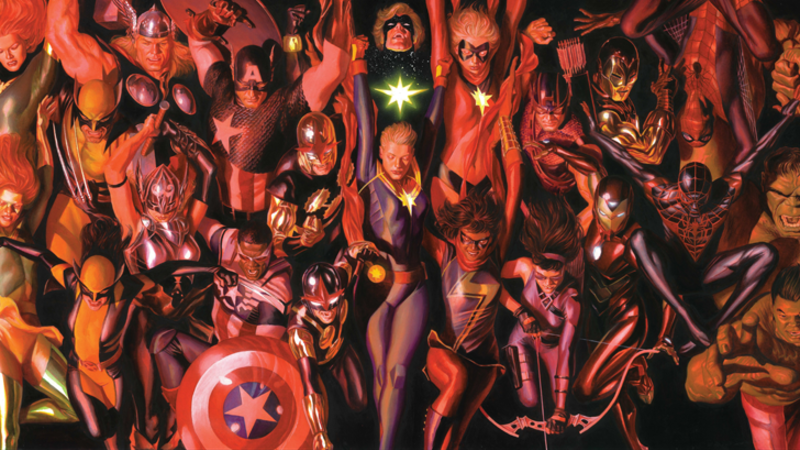 Not too long ago, Marvel treated us to a preview of their future: they revealed to us Marvel Legacy, a relaunch that hints at a return to form for Marvel. With all of this excitement, fans are wondering how Legacy is going to affect Marvel’s extended cast of beloved characters. Well, we’re also wondering, and we’re going to tell you EXACTLY what is we’re wondering. So, sit back and pop open a juice box: here are five things we want to see from Marvel Legacy!

First off, let’s talk about one of the things missing from Marvel right now: the “First Family.” The Fantastic Four, for many, made Marvel what it is today. They were the ones who introduced characters, concepts and worlds to the Marvel universe that are still being used today. So, having them absent just feels wrong.

While I’ll admit that the ending to Secret Wars gave them a nice sendoff, their absence has been felt ever since. I know most of this depends on Marvel getting the movie rights back, but there’s still hope! The Thing and the Human Torch are still around, maybe they can form a new team. Whether it would be something new or the reunion we’re waiting for, we’re hoping the Fantastic Four returns very, very, VERY soon.

Don’t get me wrong, events can be a lot of fun when handled correctly. Thing is, Marvel has recently thrown a lot of events our way and fans are suffering from serous event fatigue. Incidentally, they’re especially tired of the ones where heroes beat the living crap out of each other.

It’s hard to get a feel of the status quo when it’s constantly being changed! Recently, Marvel stated that they would take a break from events after Secret Empire. The only problem is, we already know there are others in the works, like Venomverse! There’s nothing wrong with that, but we’d prefer if events weren’t stacked one on top of each other!

Be honest, some of you were hoping this would be here. We all know why the big Inhuman push happened; it’s because of Marvel’s feud with Fox over the X-Men movie rights. In response, they tried to give the Inhumans a bigger spotlight to distance themselves from the X-Men. I’m all for giving unpopular characters time to shine. However, they wanted these guys to completely replace the X-Men!

The result? This overexposure — being shoehorned into every story — has increased fans’ level of disinterest in the characters. So much so, that the word “Inhuman” is becomming a dirty word among Marvel readers! It also didn’t help that a lot of the Inhumans books ripped off elements of the X-Men, too!

To be fair, there are some good characters to come out of this like Ms. Marvel and Moon Girl. So, it wouldn’t be right to say, “Get rid of all Inhumans,” but there should definitely be less of them. It’s especially sad when I can’t even remember most of their names! We don’t need five different comics solely about them. Let’s keep the few that work and ditch the rest! The X-Men are some of Marvel’s most popular characters, so trying to replace them is a mistake!

You know, it’s hard to remember, but people used to like Carol Danvers before Civil War II. Captain Marvel did some really bad things during that event; some were borderline villainous and unforgivable. So, it kind of felt like salt in the wound when she ended up winning the war in the end. For many, her actions in Civil War II ruined her!

So, I think it would help if we saw Captain Marvel finally pay for her actions and then redeem herself. Iron Man once went through something similar after the first Civil War, where he was brought to his lowest point and had to realize what he did was wrong. From there, he rose from the ashes and made up for what he did. That’s exactly what Captain Marvel needs to do: she needs to own up to her mistakes seek redemption! If Marvel wants us to like this character again, they need to make Captain Marvel a hero again!

Now to tackle one of the heavy criticisms Marvel’s received lately: fans have been a little annoyed about how Marvel replaced some classic characters in favor of new ones. Nothing about this is bad, but it’s not good when those characters are only made to replace the old ones. It’s especially tough when it’s at the expense of the classics.

However, there are fans who like some newer Marvel characters like Miles Morales and Kamala Khan. They’d be pretty upset if those characters disappeared. So, instead of having to choose between one or the other, why not have both? Keep the characters fans like and have them work alongside the veteran Marvel heroes. This way, nobody has to lose anything and can enjoy two different flavors of Marvel!