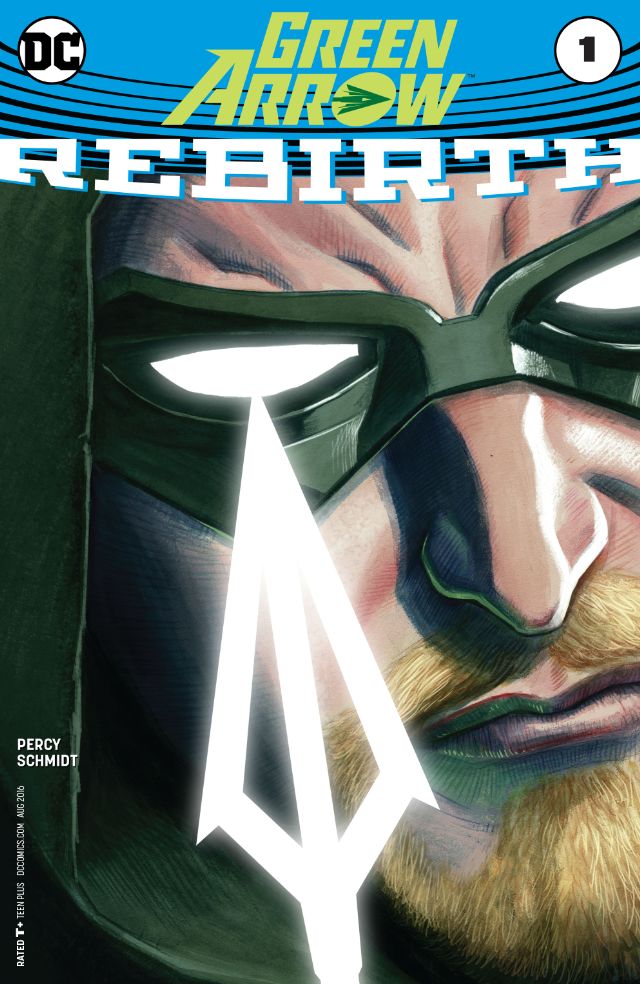 Check out Our Review [WITH SPOILERS] for Green Arrow REBIRTH #1

Many, many DC heroes were broken during the New 52. Ironically, Green Arrow was one of the most shattered. I say ironically because while DC had fits trying to find a compelling direction for Oliver Queen in the comics, the character was achieving unimagined mainstream TV success on the CW in Arrow.

Sadly, comics could not match live-action TV, and the four-color Green Arrow floundered under the eye of many creators that failed to find a coherent rhythm with the character. Writer Jeff Lemire had a short, compelling run on Green Arrow, but that was about it.

With Rebirth, DC has a chance to do it all again and make comic book Oliver Queen as important as he is on TV. To do this, writer Benjamin Percy and artist Otto Schmidt go classic and reunite Green Arrow and Black Canary for the first time in the New 52 continuity. This Rebirth issue has a classic, almost Bronze Age feel as the sparks and insults fly between Oliver and Dinah. Both characters are wearing approximations of their classic garb and the whole thing feels like a contemporary echo of the classic “Hard Traveling Heroes.”

But while the tone is right, the dialogue is ham-fisted and way too on the nose at times as Percy takes any chance he gets to beat the reader over the head with the fact that Oliver is once again a lefty social justice warrior – you know, just like he was back in the day. Heck, Queen even sports the famous goatee once again as the script goes out of its way to tell the reader again and again. Mr. Percy, we have eyes. Thank you.

The issue’s threat is also hastily conceived as Green Arrow and Black Canary go up against an underground group of freaks that kidnap and sell Seattle’s homeless to the highest bidder. Now, this begs the following question: if someone is rich enough to participate in this disturbing little set up, why isn’t that person just using his or her resources to procure his or her own homeless? This whole twisted little scenario has the right atmosphere but seems hastily conceived.

Also, Black Canary carried her own title for the past year, and it was a good one. Why is this a solo Green Arrow book if Black Canary is an equal co-star in every way? While this is certainly a step up for GA, this is a step back for the Black Canary who once again seems like just the chick with the fishnets riding in Oliver’s sidecar.

All that being said, this is a step up for Green Arrow in many ways. There’s a fun rhythm and coherency to the book that has been lacking in all of the character’s New 52 appearances sans Lemire. It is the best solo Green Arrow comic I have experienced in quite some time, but there are still some noticeable warts that keep this from becoming a must read Rebirth title. A little less obvious characterization and a lot more plot logic can save this title from becoming another forgettable chapter in Green Arrow history.