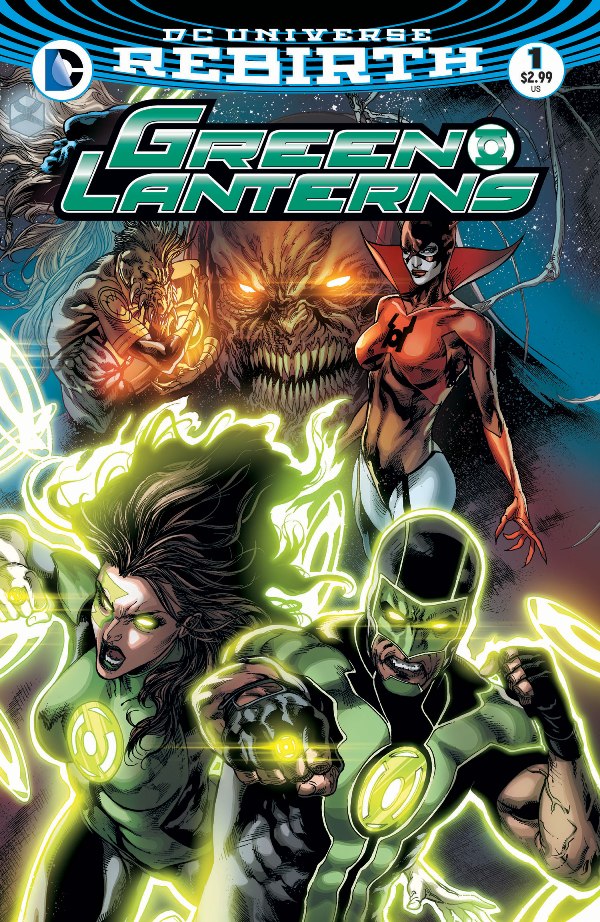 Check out Our Review [WITH SPOILERS] of Green Lanterns #1

In Green Lanterns Rebirth #1, writers Geoff Johns and Sam Humphries presented a new direction for the Earth’s Green Lanterns. The issue focused on Simon Baz and Jessica Cruz and provided the backstory and motivation for both new GLs. In Green Lanterns #1, Humphries is on his own and he begins the adventures of Baz and Cruz in earnest.

Sadly, the book is still a Geoff Johns echo with nothing new added. The threat of Atrocitus and the Red Lanterns are reintroduced while Cruz and Baz’s backstory is told through exposition wedged between action sequences. There is not a great deal of humor or spirit in this issue but there are many mysteries presented.

Humphries does nail the voice of his new characters, particularly Cruz, as the writer really delves into the psyche of both new Lanterns. The best part of the issue is when the anxiety-riddled Cruz has to run some errands with her sister. Cruz has an easier time facing alien threats than shopping for groceries and that is a darn unique direction for a hero.

Deft characterization aside, this issue is a bunch of concepts loosely strung together. Humphries gives the reader a feel for the characters but not the overarching plot as the GL duo investigates a disturbing crime scene and then protects a small town from a Red Lantern energy incursion. That’s really all that happens as the issue is over before it begins.

I’m happy the Red Lanterns feel threatening again. The past few years, the Reds have lost their edge. A Red Lantern should never just be standing around and talking, they should be sputtering blood energy and screaming and that’s how they are portrayed in this issue. But Atrocitus and Bleeze don’t really do much more than pose and spit at each other as there is barely any plot movement in this issue. Nice artwork though as Robson Rocha draws the heck out of the Red Lantern pages and also creates some unique layouts that move the little bit of story forward.

Green Lanterns #1 wasn’t the start of the Rebirth era of Green Lanterns I was hoping for. It is all a briskly paced, disposable Geoff Johns cover song that left me feeling a bit empty, but all that being said, I am absolutely intrigued by the character potential of Cruz and Baz.