Home COMICS Howard the Duck Volume 0 Review: “What the Duck” 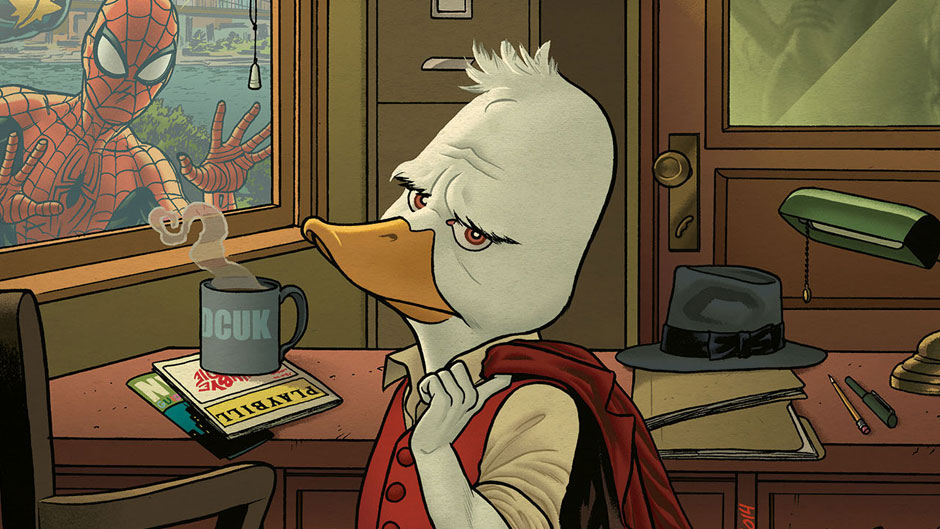 A sure sign that you, as a geek parent, are raising good geek kids is the gifts they give.  Case in point, the trade paperback copy of Howard the Duck Volume 0 I received as a Father’s Day gift.

Since his inception in the 1970s, Howard the Duck has served as a magnifying glass for American culture both inside and outside of the Marvel Universe. The new series, which finds Howard working as a private investigator, is a perfect vehicle for this type of storytelling.

What the Duck collects issues 1-5 of the new ongoing series and features guest appearances by Spider-Man, Doctor Strange, She-Hulk, the Guardians of the Galaxy and Aunt May, to name just a few.

The action is just as madcap as that guest-list would imply. Over the course of five issues, Howard the Duck takes a case, ends up in deep space, gets sued by Luke Cage and Iron Fist, hangs out with hero impersonators and ends up in a superhero slobberknocker to which he has little to contribute.

Did I mention the part where Aunt May gets mugged by Hans Moleman?

Or the part where Howard the Duck interrupts Doctor Strange’s poker game with Thog?

First and foremost, this book is fun. The idea of casting Howard the Duck as a PI is inspired; it’s perfect for his outsider’s perspective. It also allows him the freedom to interact with people, places and things from all over the Marvel Universe as he attempts to resolve his case. Not all of those characters are happy to see Howard the Duck, but that just adds to the general sense of humor in the collection.

If you’re looking for a funny, action-packed collection to spend some time with, give “What the Duck” a look. It’s a modern take on a classic Marvel character that really works.

Howard the Duck exists in the MCU. This is a good time to get to know him if you don’t already. If you’re already familiar with his feathered exploits, this is a good way to catch up with an old friend in a new setting.