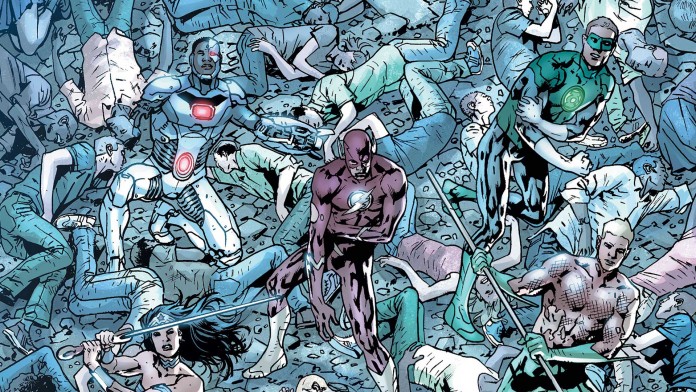 Our friends at DC Comics recently released a preview of Justice League of America #8 featuring a look at the final battle between the Justice League and self-professed Kryptonian deity, Rao. Will Rao prevail, or will Superman actually be Superman somewhere on some form of media and FINALLY kick some SERIOUS SUPER-@$$!?? Ahem. Now that I’ve successfully purged that bit of discontentment, feel free to take a look at the following covers and finished, interior pages!

“In this issue of JUSTICE LEAGUE OF AMERICA, the Kryptonian deity Rao and Superman are battling it out! But it turns out that Rao is more connected to his followers than the League could imagine, and to kill him would mean the death of thousands.

Batman, Cyborg and Silas Stone have a plan to end Rao’s reign, but it will take the full power of the League to make it work. With such a dangerous strategy, sacrifices must be made to ensure the safety of mankind. Find out what happens next from writer Bryan Hitch and artists Daniel Henriques (inks), Alex Sinclair (colors) and Chris Eliopoulos (letters) in JUSTICE LEAGUE OF AMERICA #8!”