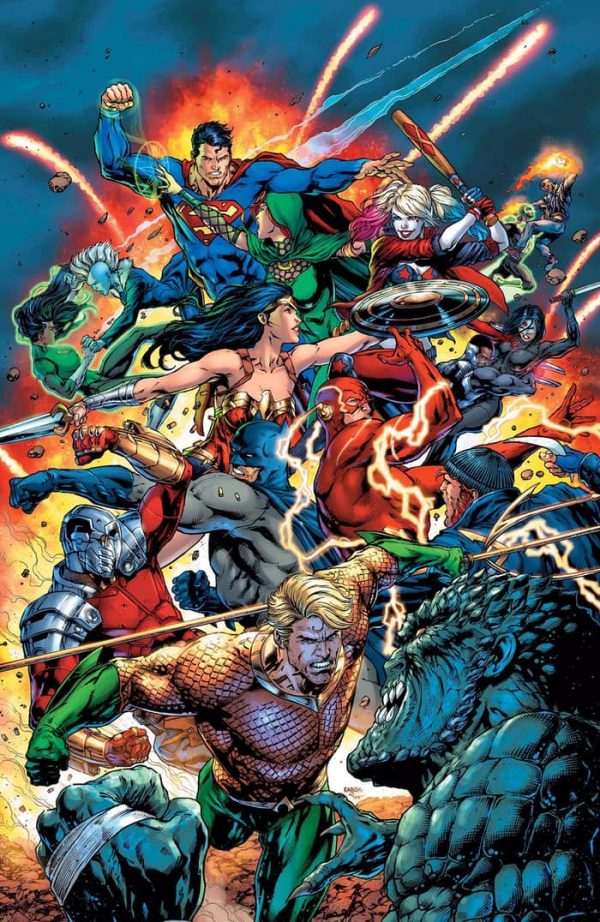 Gang, our Justice League vs. Suicide Squad #1 review is a little SPOILER-Y, so…check back with us after you’ve read the issue. Oh? Still here? Thank you!

Holy monkey poop is this a pretty comic! Justice League vs. Suicide Squad #1 is a delight to look at as artist Jason Fabok seems to be DC’s go to guy for big time comic events these days. Seriously though, Fabok out Jim Lees Jim Lee these days. Fabok’s renderings of DC’s biggest hero and villain icons should act as model sheets for anyone attempting to do a modern day rendition of these characters. He’s that damn good.

While Fabok is breaking new ground visually, Justice League vs. Suicide Squad #1 simply plays the hits and give readers exactly what you would think for this type of book. Clearly, Justice League vs. Suicide Squad screams of, “Hey, let’s give something to the folks excited about our films,” and really, the first issue of this event series reads like a DC 101 designed for newbies. There’s absolutely nothing wrong with that but it will leave regular readers going, “Ok, and…?”

The issue sees the Suicide Squad on a mission to save the island nation of Badhnisia from a death cult armed with an earthquake device which sounds like it was pulled from a random generic comic book plot generator. This is all done to establish the members of Suicide Squad. The membership of this iteration of the Squad is made up of most of the film cast plus Killer Frost, so right there you have a bit of a film/TV crossover. Once the Squad is established, we cut to the Justice League discussing what to do about the Squad and then on to the inevitable Squad versus League super-tussle. Well, not really, because Justice League vs. Suicide Squad #1 is decompressed to an inch of its life and you’ll have to wait until next issue to see cinematic titans tangle.

Writer Joshua Williamson brings a filmic quality to the action and excels at pacing the explosions, destruction, and punching. The writer seems more energized in bringing the Justice League to life and each of the characters on both teams sounds and acts like they should. There’s just not much here. Justice League vs. Suicide Squad #1 is a well-paced cash grab that really doesn’t justify its own existence. This story could be told in either Justice League or Suicide Squad, but DC wants this to be big and splashy. It isn’t. It is nice to look at though.

There is a great last page surprise though which bodes well for the rest of the series; a couple of classic characters, two of which will shock the heck out of fans, appear on the last page cliffhanger as the series’ big bads. The awesome last sequence will make you feel like you read something great, but you didn’t; you read something that exists to cash in on film properties brought to you by a writer that’s trying his best to make the darn thing work and an innovative artist doing the work of his career.