Home COMICS Eight of the Most ‘WTF’ Moments in Avengers Comic Book History!

Ah, the good ol’ days. The Avengers may be all cool in the movies, but back then, there was none of the gritty Nolan-esque realism plaguing our supposedly-colorful superheroes. In every panel was a sure treat to the absolute delight of readers of all ages—from sheer awesomeness to utter ridiculousness. The Golden and Silver Age not only gave birth to most of the comic book characters we know and love today, but they also brought us a great deal of laughs, whether intentional or not. For your weekly dose of ‘throwback’, here are just some of the most ludicrous and ‘WTF’-worthy moments in Avengers comic book history that are just plain embarrassing. What fun!

In the very first issue of The Avengers, the great big Hulk disguises himself as an animal-juggling robot named Mechano, because why the heck not. For the crowd’s amusement (and his pure humiliation), he juggles safari wildlife while masquerading around as an incredibly lifelike robot who also happens to be green, and nobody suspects a thing.

I’m assuming this not only insults the intelligence of the rest of the team, but it also insults Hulk by making him wear cheap clown makeup as part of his act. Not to mention there was probably too much cruelty to animals right there—those poor things never thought they’d be manhandled by a green giant.

Still, this isn’t the first time the Hulk’s worn a disguise. He also donned an Abominable Snowman costume at some point back then in order to scare off some thugs, because it’s fun to spread urban legends to unsuspecting villains. Who are we to judge?

You know that an idea is horrible when even your friendly neighborhood Spidey thinks it’s absolutely dreadful. When Johnny Storm of the Fantastic Four offers Peter Parker a Corona Motors vehicle to help with the promotion of their non-polluting car engine, Spider-Man hesitantly accepts because he needs the money like he always does. He did develop a bro-mance with that buggy as they went on adventures together, but as with all superficial relationships, their thing had to come to a rocky end when The Tinkerer modified the car to become a murderous killing machine. Fans of Stephen King’s Christine would have a field day.

Leave it to the powerless superhero — who’s already the butt of many jokes — to throw a hissy fit and rage-quit. Usually in a huff, Hawkeye has quit the team more times than we can count. He’s already quit the team around five times or so, and he does so by simply leaving a note on the fridge like it ain’t no thang. It’s almost as low as sending a break-up email or a break-up text, isn’t it?

Yes, you read that right—squeaky clean Cap actually got hooked on drugs during the Streets of Poison arc and went cray-cray (despite the fact that he’s already on drugs if you consider that Super Soldier serum). When Steve Rogers fights his way into a meth lab and it explodes, the drugs seep their way into his blood and create this supercharged patriotic addict who snaps at his teammates and has an aversion to shaving. This new Cap-junkie hears voices in his head and basically acts totally out of character—even to the point of acting like a chicken. We kid you not.

Okay, so you probably think that all these instances are from the old days of comics, so yes, they have to be ridiculous, right? Wrong. Because in 1998’s Invincible Iron Man #26, Tony Stark’s armor becomes a sentient, psychopathic stalker who falls in love with Tony and becomes obsessed with having Tony inside it. It eventually sacrifices itself by offering its heart to Tony literally. A soap opera or a Greek tragedy? You decide.

The Odinson was actually gullible enough in the old days to believe he could just shout out his secret identity to the world and no one would be the wiser (because Doctor Don Blake was probably a show-off deep down). But even in more recent comics, Thor is still pretty easy to trick. In the late 90s, there was a weird storyline in which an escaped mental patient tricked Thor into thinking he was his old friend Heimdall when he was just a petty thief and a good liar. It’s either that, or Thor was just too thick to see through the whole thing (is that why he needs to keep his helmet on at all times?).

Even villains were not spared from ridicule back then. In Journey Into Mystery #88, Loki himself gets tricked, proving that being the god of trickery means squat in this world. When Thor gets separated from his hammer, a powerless Don Blake decides to put up a plastic cut-out of Thor to make Loki believe that it’s the actual God of Thunder in front of him instead of just a cheap, plastic dummy.

With common sense out the window, a completely mind-blown Loki falls for the trap and thinks Thor is actually standing there in front of him. He then proceeds to disable the force field he has trapped Mjolnir in, and Don Blake grabs the opportunity to spring out from behind the plastic cut-out to take his hammer back, transforming into the real Thor. I swear—you can’t make this stuff up.

Before he became this all-powerful, universe-conquering baddie that’s seen in the Avengers movies, Thanos was just your typical crook who found himself repeatedly handcuffed and sent to prison because that’s where bad guys end up all the time.

Yep. Just your average, run-of-the-mill villain with a penchant for bad puns and labeling his aircraft because you never know who might mistake his for someone else’s.

Because Thanos and his Thanos-Copter in Spidey Super-Stories #39 is just pure gold, I’ll let the images do the talking. Tell me this isn’t the best comic you have ever read in your entire existence. 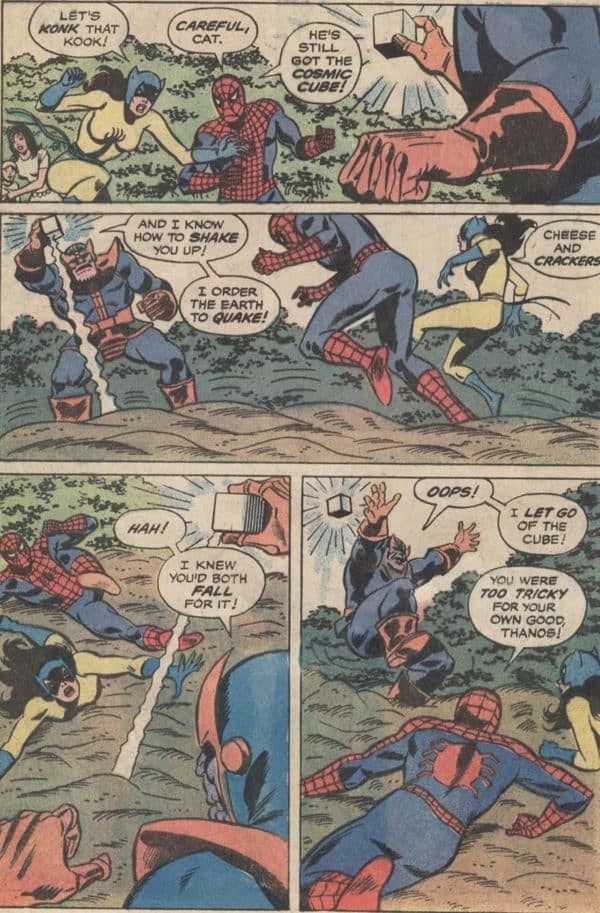 Got anymore funny Avengers comic book moments? Feel free to share them with us below and let’s all have a good laugh at their expense!